Hank Campbell
When even CNBC is talking about the writing on the wall for the Centers of Disease Control and Prevention, they know they are in big trouble.

I have been predicting this for years, but most people thought it was funny when I would criticize the CDC for needing an outrageous 6 weeks to tell us there was lettuce being sold tainted with E. coli. They assumed it must be real when they fabricated "pre-diabetes" criteria and even wasted tens of millions of our tax dollars putting up billboards trying to convince the public they have a disease (and will burden the health care system getting doctors to discuss, not to mention medication costs) that no other country accepts as existing. Or a vaping epidemic. Or that pain patients and doctors created a fentanyl epidemic.

CDC spent the last 10 decade manufacturing new epidemics to lobby for Congressional funding but what happened when the US was faced with a real epidemic? They were so lost in a bureaucratic maze of their own creation they were paralyzed. When a university in California asked them for a coronavirus test early in what became the pandemic, the CDC refused to send it until the hospital proved the patient had coronavirus.

When they did finally realize that claiming to be a super-agency for disease meant more than asking politicians for raises, they did send out test kits. With faulty reagents. So the tests were useless.

Now they are suggesting the vaccines are useless. If you are fully vaccinated, they still want you masked everywhere except on a solo walk in the mountains. It makes no sense. If 2021 is any indication, CDC will only change its 'guidance' four weeks after the public ignores them in disgust and has confidence in the vaccines that government told them to get - and stops wearing masks. 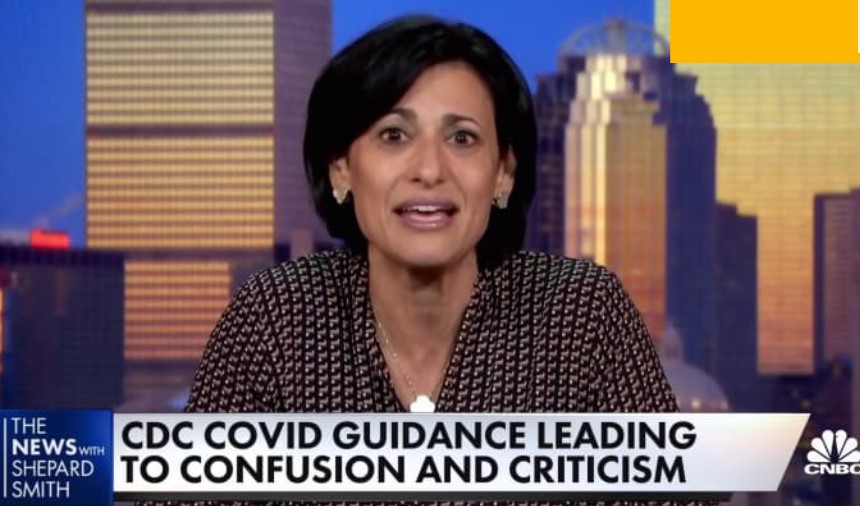 Dr. Scott Gottlieb, the most effective head of FDA this century, knows the vaccines work and said we should roll back the mask mandates as quickly as they were rolled out.

How does CDC Director Dr. Rochelle Walensky respond to that? "We are looking forward to updating our guidance very soon."

And the follow-up question got the same response. "We are looking forward to updating our guidance very soon."

That is the CDC in a nutshell. We are the government and you are not. It does not exist until we say it exists. Why go on a news program and jabber about science and then when you are asked about how CDC guidance is undermining perceptions of the effectiveness of the vaccines, ignore the science and stonewall Americans?

Even the Obama administration health policy director, Dr. Kavita Patel, was critical: "I think the CDC’s credibility is eroding as quickly as our cases of Coronavirus are eroding."

For non-partisan, scientifically literate people, CDC credibility was already gone. It just wasn't dangerous to have government union employees wasting money reorganizing data they get from the states.

Now it is dangerous. President Biden needs to fix this. Not call a panel of political insiders who will offer one or two meaningless suggestions in 2023, like the old days. Fix it. He needs to be the President he said he was going to be, and not turn into the politician his critics feared he would become.
Science 2.0
More Articles All Articles
About