Does Genomics Hold Back Advancement Against Racism In Medical Equality?
By Hank Campbell | July 17th 2020 11:24 AM | Print | E-mail

Hank Campbell
A new Hastings Report compilation is based on the notion that genomics are the reason we still have medical inequality. Since genomics is a field that exists to sequence our DNA content and therefore help understand disease, it seems odd to posit that it could promote inequality when studying biology we all share.

I'll get to that in a moment but first, we all realize that equality is a relative term because ethics and morality are relative. I'm certainly no moral relativist but I'm a realist in that regard. In 1895, Emile Durkheim wrote in "The Rules Of Sociological Method" how when a level of crime becomes the norm for a group society will redefine crime. An island full of Jeffrey Epsteins would have much different societal views of crime than the island of Manhattan does. This relativity also goes the other way. If we build a lot of prisons we find crimes to fill them - minor infractions become worthy of jail. We "define deviancy down" and up, as Senator Pat Moynihan phrased it.

Yet some argue equality is subjective because if you don't feel equal, you are not equal, regardless of what the societal norms may be. Equality issues have boiled over in the U.S., due to the senseless murder of George Floyd. Obviously the issue is not one murder. Statistics show the risks of a cop killing a white man and a black man are about equal but we recognize that framing equality that way is not telling the whole story. There are instead numerous unseen and unpublicized slights people of color have faced that are now in the public consciousness more than ever. How do we quantify those? When I was young and felt looked down on, I believed it was because of my clothes.  Was that valid? My clothes, in hindsight, were a proxy for being poor. We were poor, we looked poor. I never felt slighted because of my skin color. Yet maybe my Puerto Rican next door neighbors, who were just as poor, did feel skin color was the reason if they got slighted. 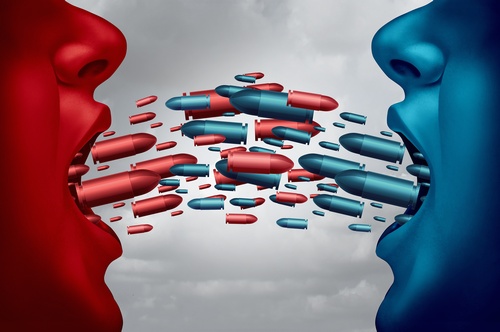 Is genomics the source of medical injustice? Missiles fly in culture for lots of reasons that may not make sense to the public. Credit: Lightspring/Shutterstock.com

I used statistics in the above paragraph and you may dislike how they were used, or you may feel they are not telling the whole story, but that is the whole point. Statistics are never enough, it is why ridiculous epidemiology claims about trace chemicals being "endocrine disruptors" and chocolate making you healthier are nonsense. They lack a quantifiable scientific foundation and so are reduced to falling back on correlation. Genomics and other sciences remove a lot of opinion from claims because it is a way to scientifically quantify risk. Who doesn't want to know if they have a higher genetic disposition to breast cancer or that too many calories will cause obesity?

But even statistics are better than feelings or the kind of performative activism of people who are outsiders-looking-in that we get a lot of on social media now. They want Instagram photos at protests to show they care, but really it's about them. And that's the problem with the recent Hastings Center report on genomics; all of the essays are written by social scientists and humanities scholars, no scientists included. They may have a ready rationalization for that; only they can see the problems in science because they're outside, but that is a lot like white people saying only they can see problems with minorities. Yet if the essayists are hoping to show an aspect of science that scientists fail to see, it's a miss. Instead, there is a lot of the personal narrative and not much real insight. In claiming to care about medical equality for others they manage to make the stories about themselves.

For example, one of the essays contends modern scientific fields equal colonialism, this by someone whose appeal to authority fallacy begins with a grandparent who had native heritage (so do I). In scientific reality, colonialism has been happening for 50,000 years, so claiming an arbitrary point in time in which it became wrong is capricious.

When your definition is subjective, what isn't colonialism? The most violent period in America was before Europeans arrived, so people whose ancestors came from Russia but now call themselves natives were all colonizing each other, with hatchets and arrows. Sure, white people did over-represent in science that happened to extol white people, most notably 20th century progressives and their love of eugenics, but many scientists told them they misunderstood Darwin. That is not an indictment of science and to claim it is illogical. White elite eugenicists also created Planned Parenthood and Sierra Club but no one argues birth control and environmentalism remain tainted due to association with early leaders who used the flag of science to advance their racist agenda, and science should not be considered the source of the problem either. Even the most scientific of the essays, by the parent of a child for whom they found what they term a “horizontal identity marked by a genetic variant", falls back on quasi-paranoid determinism; that The Other might deny their daughter personhood because of the disability.

I have a son with a cognitive disability and macular dystrophy but I have never once assumed Evil Science would mark him as less than a person. My reason for less paranoia may be simple; scientists are not The Other to me, a scary unknown, I know lots of them. They're simply people. I can't in good conscience stereotype the entire field but call it a prototype.

In California, the social authoritarians are political progressives, not scientists. When we give people free health care, we take the right to tell poor people whether or not they can buy a soda. The argument by government is that they want to remove health inequality but really they assume that minorities in poor neighborhoods are uneducated and can't make decisions for themselves, that corporate marketing is controlling them. That mentality is far more dangerous than a company or government having some genomic data. Yet progressive government panels are exactly the groups the scholars writing the essays think will protect us from social injustice in medicine.

They argue in the opening that genomics is preventing medicine "from advancing justice" but the Hippocratic Oath has "justice" nowhere in it. It doesn't need to have it because medicine cannot be unjust. I own a baseball bat, perhaps I can hit a homerun with it, a positive outcome in a game, but we cannot regulate whether or not all people are able to hit a homerun. All we can do is not discriminate against whether or not people get to the plate. Sticking with that analogy, the essayists are essentially arguing that as long as Major League Baseball exists, baseball can be used for injustice. It's such a non-point, like arguing in favor of clean water, that it feels more like that they want to show us how awesome they are for making it than to really inform us about an ethical and equal roadmap for our genomic future. That's performative activism, not a roadmap for how we make science better.

"Justice" is so subjective it's meaningless and that is why it can always be a new front in a perpetual war. The essayists present no evidence that medicine is discriminating against people or that genomics is preventing medicine from advancing social justice. They instead ignore that medicine has been one of the most socially just advancements of the last 150 years. What we can't mandate with medicine any more than we can with baseball is equal outcomes. Statistics can weaponize differences in outcomes as part of a culture war but that is a roadblock on the path to progress. The public see through those tactics.

I agree science deserves criticism and some philosophical input, but I think it would benefit the scholars writing these essays if they would get to know more science if they really want to be able to criticize it. The way to do that is to get to know scientists, not to engage in casual criticism that is written for their tribes. Science does need outside perspectives. Clearly so do humanities buildings. But neither is going to get it by sitting in their office thinking the worst about each other.
Science 2.0
More Articles All Articles
About