Eisenhower Didn't Just Warn Us About The Military-Industrial Complex, He Worried About Government-Controlled Science Too
By Hank Campbell | December 28th 2017 11:26 AM | Print | E-mail

Since science is both corporate and political in the modern era (the private sector and government each fund about half of basic research in the U.S.), if you defend science you are implicitly defending corporations and engaging in politics. Whether you think one or the other is superior or more ethical is likely based more on how you vote than anything impartial.

That was not always the case but Ernest Lawrence, whose name is now on both Lawrence Berkeley National Lab and Lawrence Livermore National Lab, ushered in the era of academic Big Science by understanding that if you did what government wanted, they would throw money at you. And then you could use some of that money to do what you wanted.

The rush in academia toward government funding really caught on after the Manhattan Project, the ultimate use of government guiding academic research to create a product.(1) People whose entire labs were funded with less than $20,000 per year saw Lawrence getting hundreds of thousands, and then millions of dollars, from Uncle Sam and the race was on: Government was firmly in the science business and academics wanted to be in business with politicians.(2)

Not everyone was pleased by that. Most famous of the concerned about this new control of basic research by the government was President Dwight David Eisenhower - "Ike." Ike was someone so concerned about keeping politics out of strategic resources he refused to vote while he was a military officer. To him, it was a conflict of interest because he was paid by the government. His concern only grew while he was president during the bulk of the 1950s and government took more and more control of science funding. 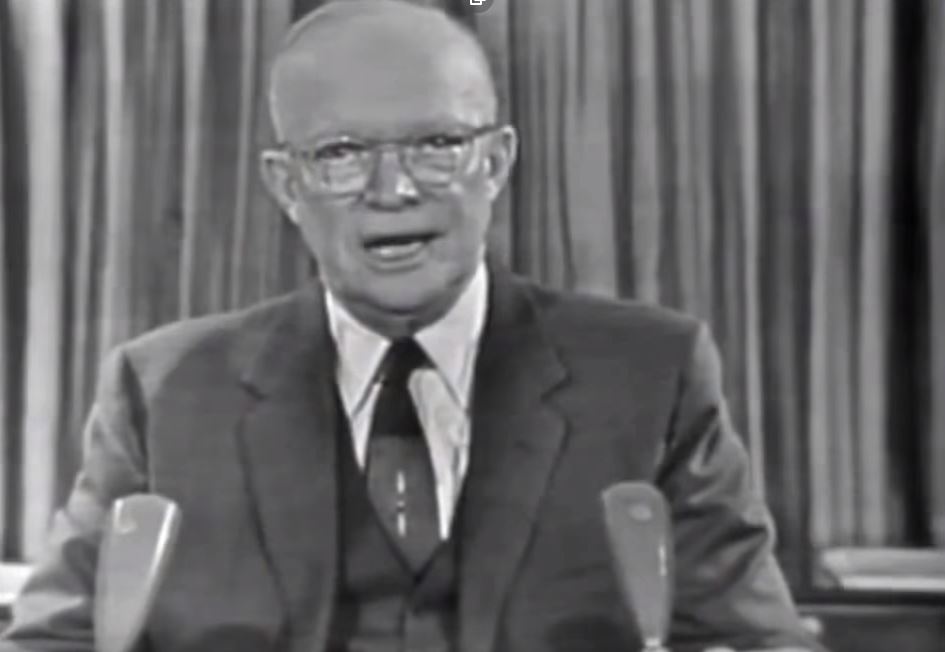 As politicians funded more of it, he believed, academia was going to self-select for those who also believed in big government and it would no longer be non-partisan. And corporations were going to control academic science by controlling politicians. Academics who "play the game" were going to get more funding and head up grant committees and panels. (3)

The concern about the growing "military-industrial complex" from Ike's 1961 farewell address -poignant because he was a career military man who won War World II in Europe before he became President partly thanks to the military-industrial complex - became part of the cultural lexicon. But less well known is his second warning, about manipulation of academia by political interests, which Fred Smith, founder of Competitive Enterprise Institute, discussed in 2011.

President Eisenhower surrounded himself with brilliant academics, he knew that science ended World War II without costing another million American lives, but by 1961 he also knew "we must also be alert to the equal and opposite danger that public policy could itself become the captive of a scientific-technological elite.”

He worried about that government control over funding would change the nature of the “free university, historically the fountainhead of free ideas and scientific discovery.” And it has. If you want to find happiness in academia, find a humanities professor at a small college. If you want to find pressure, go to a biology lab at Johns Hopkins, which needs $300 million a year from the NIH if it's going to put up new buildings and recruit key names who can then raise more money from NIH.

The prospect of domination of the nation's scholars by Federal employment, project allocations, and the power of money is ever present and is gravely to be regarded.

Yet, in holding scientific research and discovery in respect, as we should, we must also be alert to the equal and opposite danger that public policy could itself become the captive of a scientific-technological elite.

Ike was right about culture as well. Though a decade after his speech, academia was still politically balanced and conservatives had the most trust in academic science, by the 1980s they had begun to self-select for people who liked government funding. They even began to suggest that corporate science - the companies who put men on the moon and developed the vaccines and antibiotics and the GMO insulin that have saved hundreds of millions of lives - meant less independence. Academia meant freedom, was the inference, but later it became common to believe that to be an academic you had to be a liberal because liberals are just smarter. (4)

That lurch into partisan politics has had repercussions. It's reality that when people know you are partisan, they trust your objectivity less even if you are on their side. Today, only liberals retain historical high levels of trust in the impartial nature of academic science. Conservatives, libertarians, and progressives do not. And so even the people on the political side of academics don't trust them on food, energy, medicine and chemicals any more than they trust corporate scientists or the government.

As a result of seeing science subtly manipulated by government and trust among the public declining, that tide is turning again. A new generation of science academics, who are starting on their third post-doc position and questioning the Old Guard's claims that corporate funding is wrong and only government is right, are critical of the claim that you can't be a scientist unless you are a liberal and that corporate funding is bad. They realize that taxes are finite and that billions of dollars in federal government marketing about STEM careers in academia have led to a glut in Ph.D. supply, that there are now academic jobs for just 16 percent of graduating scientists. They have become pawns for scientific-technological elites while having little chance of getting a seat at the table, just as President Eisenhower warned.

Given that milieu, how can we discuss policy without getting into partisan politics? It isn't easy. Virtually 100 percent of health and two-thirds of science policy are dictated by politicians. And it shows. For example, Syngenta makes an herbicide known as atrazine and when the Obama administration came into office, they convened two separate assessments on it to see if it was an endocrine disruptor in frogs. That was not based on science concern, the EPA during the Bush administration had already checked that claim in 2002 and debunked it. Yet EPA was again forced to revisit the same product twice in just President Obama's first term, which certainly smacked of politicization of science.

In early 2016, our CDC began promoting a condition termed "prediabetes", which other countries claim is ridiculous, especially at the arbitrary blood sugar level our government chose. The CDC also declared that nicotine replacement won't stop smoking - unless it's in a patch or gum sold by pharmaceutical giants - and that the opioid epidemic was caused by the medical community and pain patients rather than recreational users. EPA declared that small micron particulate matter was causing acute deaths even though there were none, not even during the entire history of EPA. US Fish and Wildlife Service told a landowner in Louisiana to tear down their forest and build a new one for a frog they declared endangered - in Mississippi.

We have to talk about those bad policy decisions if we are going to honor our mandate to be trusted guides for the American public on complex science and health issues.

Government-controlled science may be here to stay but that doesn't mean we have to accept rule by a scientific-technological elite that thrives on social authoritarianism.

(1) I was in the nascent physics software business when Japan was heavily subsidizing the semiconductor industry. Academics insisted our government needed to also subsidize it or we would "lose leadership" to Japan. I argued that the moment government got involved, RAM was going to cost $1 a MB because historically that was true. In that same vein, delivering a brutal hit against the government mentality at the National Institutes of Health, Samuel Broder, former Director of the National Cancer Institute, once said, "If it was up to the NIH to cure polio through a centrally directed program instead of independent investigator driven discovery, you'd have the best iron lung in the world, but not a polio vaccine."

It has gotten no better today. We are funding a ridiculous "cancer moonshot" without using what made the Apollo program successful - corporations who competed to create the lowest price. The federal government had little to do with it. If you look at the spec for the original Mercury program from the government, it was laughable. Companies made it happen.

(2) And the private sector happily gave way where they could. Why fund expensive basic research, where only 1 in 1,000 things may work out, and put your shareholders at risk when you can get hundreds of millions of taxpayers to do it? Bonus: academics will believe they are more independent if we get government to approve the grant lobbyists said should be the direction of science funding.

(3) He seems to have been right. Look at the outrage when EPA declared that EPA-funded scholars could not be on panels determining EPA policy. Outraged academics did not see it as mitigating an obvious conflict of interest, they ridiculed that EPA did not even want research it funded. Do these same academics also insist corporate scientists be on government committees approving their drugs and chemicals?

(4) At SUNY-Albany Ron McClamrock summed up the common belief, which reached its apex in the mid-2000s. "We outnumber them because academic institutions select for smart people who think their views through; and if you're smart, open-minded, and look into it carefully, you're just more likely to end up with views in the left half of contemporary America. Which is just to say: Lefties are overrepresented in academia because on average, we're just f-ing smarter."

That sentiment is now considered laughable because "lefties" deny the science behind medicine, food, energy and chemicals so reliably you can predict someone's voting habits based on if they buy organic food, supplements, think fracking will cause the earth to deflate, and that BPA is an endocrine disruptor.