Gallop: Both Republicans And Democrats Are Wildly Overstating Risks From COVID-19
By Hank Campbell | September 28th 2021 06:36 AM | Print | E-mail

Hank Campbell
There is no question that COVID-19 is the worst pandemic of my lifetime. It has led to greater absolute US deaths than the Asian Flu of 1957 and the Spanish Flu of 1918, though obviously we are 2X and 3X the population, respectively, of those pandemics so in relative terms they remain way ahead.

Where we also lead over the two other large US pandemics of the last 100 years is fear and misinformation. That is due to corporate media. Thanks to corporate media, an anti-vaccination movement that was overwhelmingly Democrats two years ago has now lurched to being Republicans. Thanks to media, the risks of COVID-19 are so blown out of proportion that neither group has a real handle on facts. They are just yelling at each other.

While polls can never tell us how people behave - on polls, even during the height of the anti-vax movement in California, they denied being anti-vaccine, they were pro-choice, and simply chose to not give more kids vaccines than the rest of the US combined - they can tell us what people believe with decent accuracy, That's important also. A new Gallop poll says both groups believe wrongly in what COVID-19 may mean to society. 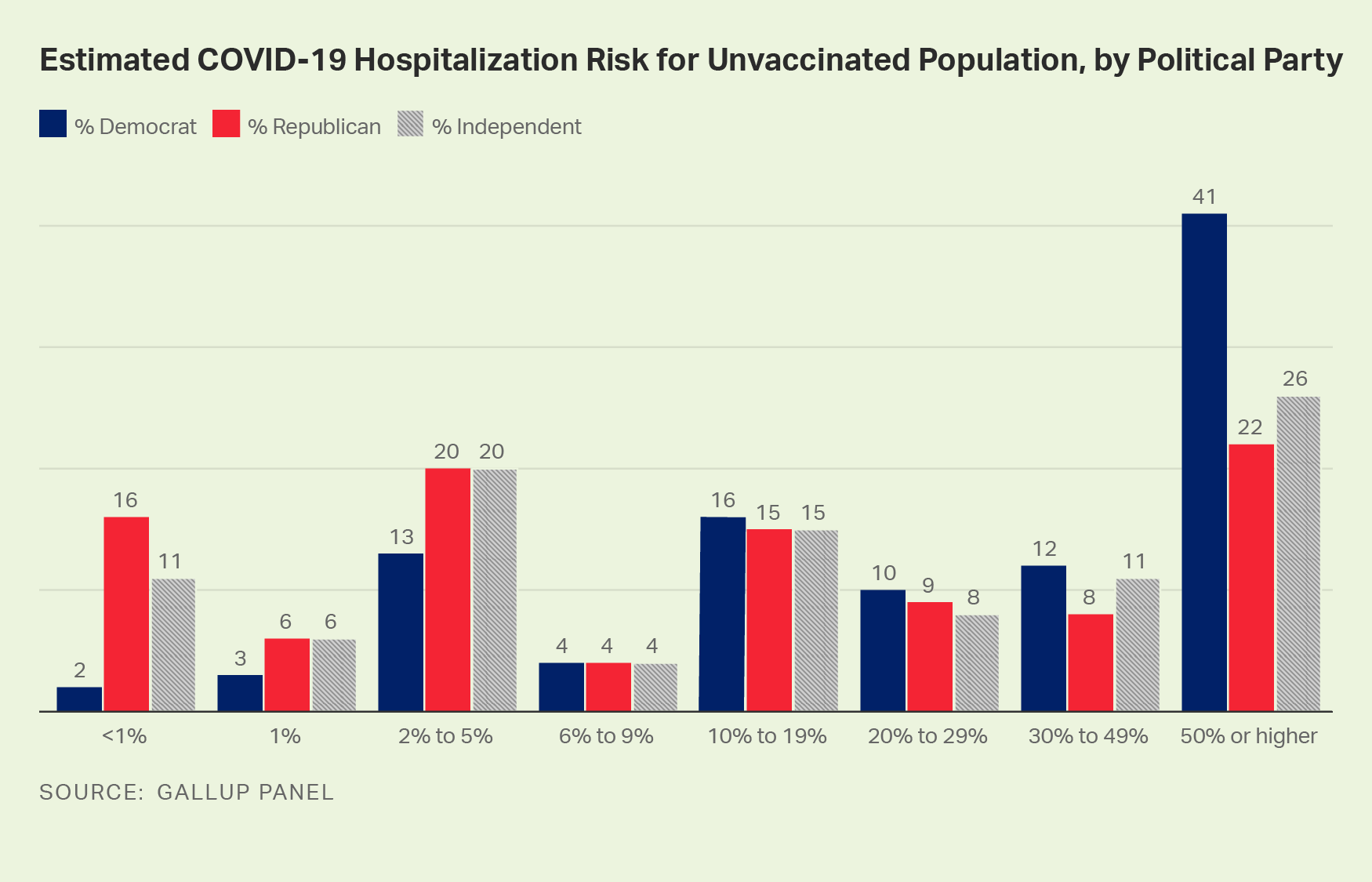 In one area, the wrongness is overwhelmingly on the side of the Democrats, by almost double. 41% of Democrats believe that 50% of unvaccinated people have been hospitalized due to COVID-19 when the real number is still under 1%. A still high yet relatively less problematic 22% of Republicans get that wrong.

Who got the right answer by a wide margin? Republicans. 16% recognize that the hospitalization rate is under 1%, an 800% better result than Democrats.

So Democrats believe they work more, but also think not taking them is like a coin flip for being in the ICU. That is a puzzle, since 88 percent of Democrats understand vaccine efficacy estimates versus 50% of Republicans. Yet if you are going to be wrong and still do the right thing, that is still better than being wrong and doing the wrong thing. It hearkens back to the old 'worship science versus worship religion' issue of the 1990s, where when it came to evolution both sides didn't know what they were talking about but Democrats at least sided with scientists and got the right answer. The weakness in that was they also blindly believed in anything political media told them about science, from claims that "alternative" medicine was the same as medicine to claims that weedkillers were turning frogs gay. And then that MMR vaccines caused autism.

National Institute of Allergy and Infectious Diseases biologist Dr. Margery Smelkinson pulls no punches in being a trusted guide for all Americans. We could use more of this.

41% of dems think there is a 50/50 chance of going to the hospital for covid. Reps and inds also grossly overstate risk.

Whether it is more Democrats than Republicans is less important than the fact that both groups fetishize their own media sources. People rushing to click like on journalists whose bias matches their own forget than corporate media exists to sell advertising and paeans to journalism are simply a delivery mechanism. You don't get hired at any corporate media outlet unless you have already matched an ideological litmus test - overwhelmingly biased to match the audience with an outlier or two to claim objectivity.

It's better for public health to get the right answer - in this case, taking vaccines - even if the understanding is wrong. That 99% of religious Republicans in Mississippi were vaccinated was always better than 70% of a Marin county California school having kids unvaccinated so even if Democrats are motivated by a lack of understanding about risk, at least it means they'll get their children the vaccine this time around.

The problem will be in the future, like the next time a lawyer sues science in San Francisco. If they can't understand something simple, like how risky not taking a vaccine for an individual is, they will be unable to recognize that bacon is not as risky to their health as plutonium - because a group of epidemiologists made that claim and they think that is science if it appears in the New York Times.
Science 2.0
More Articles All Articles
About