If You Ignore Confounders, It's Possible To Statistically Link Pesticide Use And Stroke Risk
By Hank Campbell | September 25th 2019 08:53 AM | Print | E-mail

Hank Campbell
A new paper looked at farm workers in Hawaii and found that before 1999 some of them had more heart attacks than non-farm workers and concluded the reason must be safe levels of pesticide exposure creating "subtle effects" over time.

Epidemiology can achieve anything, like show that autism is linked to organic food, if the correlates are tortured enough.

The confounders are obvious, like that the level of exposure to pesticides made no difference, but the authors declare their correlation is probably valid because a similar link was created in Taiwanese men who were exposed to high levels of pesticides.

Epidemiology is in crisis - and this kind of claim is why

The analysis was of first and second generation middle-aged and elderly Japanese-Americans, which is already like a baseball player bragging they led the club in doubles in the month of August. The mining for pesticide harm used the Kuakini Honolulu Heart Program, which enrolled over 8,000 Japanese American men on Oahu between 1965 and 1968.

Men enrolled in the study were 45 to 68 years of age and self-reported their occupation and then the authors estimated pesticide exposure using a scale from the Occupational Safety and Health Administration. Compared to men who did not work in jobs that got estimated exposure to pesticides at work, in the first 10 years of follow-up, the researchers found:

There was no significant relationship between low to moderate exposure to pesticides and the risk of heart disease or stroke, which means there is no increase with dose. This makes no sense. The No Affect Level for pesticides is orders of magnitude above "high" levels of exposure.

CVD went down over time for those with no exposure but CVD linked to farm workers went up? So exposure to pesticides increases longevity? 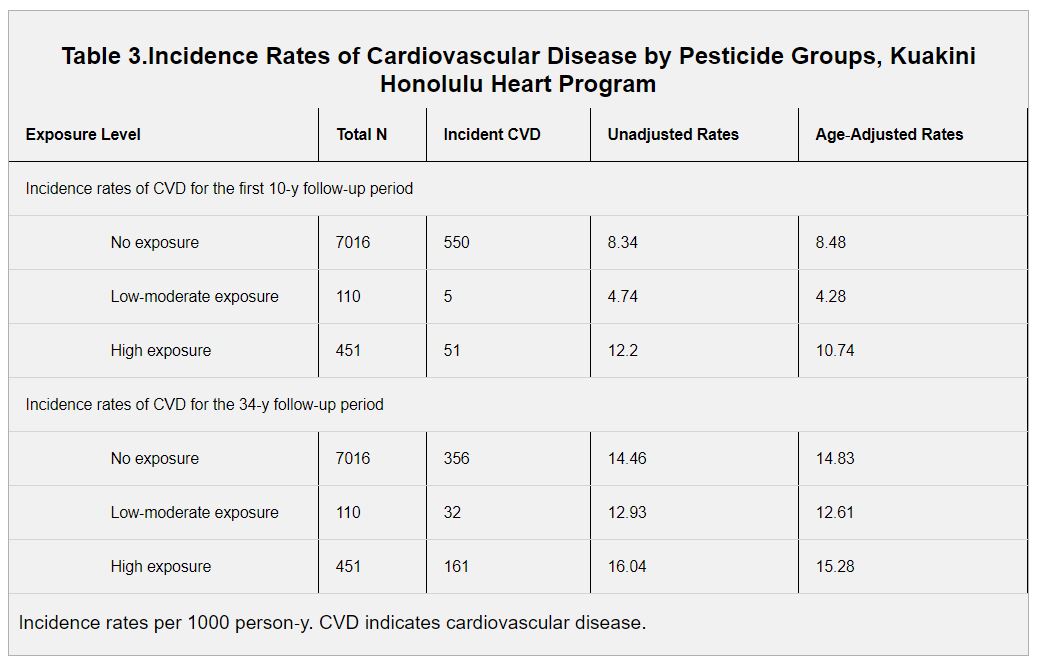 Everyone had the same age ranges but people with no exposure to pesticides had lower CVD at the 34 year mark than they had at 10. It is impossible that 40 percent of CVD cases disappeared 24 years later when age is the biggest risk factor for CVD.

To scientific neutral experts this is a giant red flag. As is their contention that it is settled that pesticides cause heart disease when their sole source for that claim is a 1998 IARC paper which only created a statistical risk related to dioxin - and used 5 orders of magnitude for dose in mice to suggest it was real in humans. Mice are not little people and never have been, that is why exploratory papers cannot be established science until they are confirmed with real data.

Men with cardiovascular disease had higher cholesterol but lower alcohol - an actual carcinogen and stroke risk factor, no data dredging needed - while those with no exposure smoked more. Another actual heart disease risk factor. They make sure to name drop DDT and other "banned" pesticides (without noting that DDT was banned by overruling the science, and our EPA writes the instructions for spraying it inside homes in other countries) but are unable to know if they were used at all, or by which farmers.

They dismiss the confounders and allege they might be conservative in their claims about heart disease risk by noting the half life of pesticides, and while that is great clickbait for journalists in The Guardian it has zero biological relevance. They also say women may not have been affected by this but different classes of pesticides might be more harmful to them because...chemicals.