News Staff
On the heels of a rather poorly constructed International Agency for Research on Cancer (IARC) analysis of organophosphate insecticides and pesticides a short while ago and a bizarre claim by the activist-funded group Moms Across America last year, the public is concerned about popular products like glyphosate. Mainstream journalism is no help, science is complex and when the $100 million Natural Resources Defense Council (famous for the Alar on apples manufactured scare) unleashes its public relations team on politically sympathetic journalists, claims are going to be repeated without much skepticism.

Fortunately, not all scientists work for environmental activism groups, so a new study debunking claims about the presence of pesticides won't get the same media attention, but it will be valuable for people who want to separate science from hyperbole.

A report presented at the Federation of American Societies for Experimental Biology Conference yesterday in Big Sky, Montana found that glyphosate, the main ingredient in the herbicide Roundup, does not accumulate in mother's breast milk, despite what we have been told.

Though NRDC, Environmental Working Group, Mothers Across America and other fundraising groups will immediately play the "corporate funded" card, the study had its results independently verified by an accredited, outside organization. 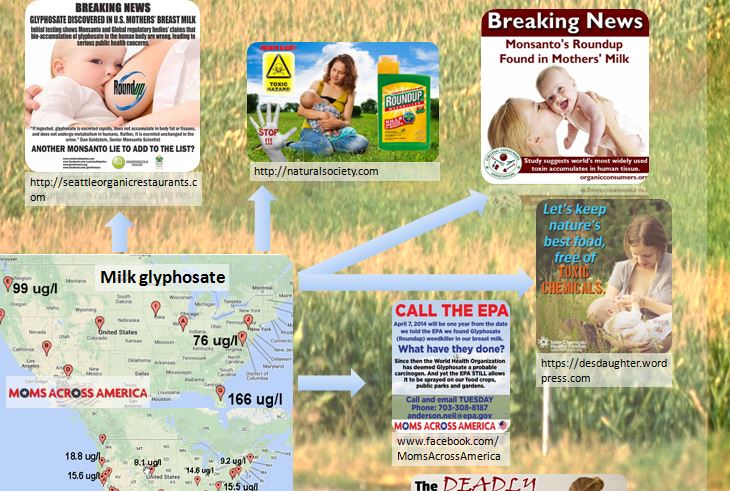 Credit: 'Evidence that glyphosate, the active ingredient in Roundup®, is not present in human milk', Michelle K McGuire, Kimberly Lackey, Janae Carrothers, Bahman Shafii, William Price, and Mark A McGuire at the Federation of American Societies for Experimental Biology Conference

Lead researcher Michelle McGuire, an associate professor in the Washington State University School of Biological Sciences, and colleagues show that glyphosate, the most used weed-killing chemical in the world, does not accumulate over time in human milk.

The U.S. Environmental Protection Agency is using the study as part of an ongoing review of glyphosate regulations prompted by public concern over a controversial report on the chemical released by an advocacy group, Moms Across America, last year. Yes, it is science versus anti-science advocates once again, in the latest round of the scientization of politics.

"The Moms Across America study flat out got it wrong," said McGuire, who is an executive committee member for the International Society for Research in Human Milk and Lactation and a national spokesperson for the American Society for Nutrition. "Our study provides strong evidence that glyphosate is not in human milk. The MAA findings are unverified, not consistent with published safety data and are based off an assay designed to test for glyphosate in water, not breast milk."

A large body of scientific evidence shows breast feeding offers unparalleled nutritional and immunological benefits for both mothers and children.  Taking this into consideration, you can imagine the consternation McGuire, a lactation physiologist with more than 25 years of research experience, felt when a study by activists publicly called into question the safety and healthfulness of breast milk.

The Moms Across America and Sustainable Pulse study claimed that traces of glyphosate were found in three out of ten breast milk samples submitted for analysis.

The findings, which were published on the Moms Across America website, garnered national media attention and quickly led to a public concern about the safety of glyphosate, a product widely used for weed control for over 30 years.

Independent regulatory and safety assessments of glyphosate conducted by scientists at organizations like the National Institutes of Health, the German Agency for Risk Assessment and the Georgetown University School of Medicine have found no consistent effects of glyphosate exposure on reproductive health or developing offspring.

In McGuire's research, she and her colleagues collected milk and urine samples from 41 lactating women living in or near the cities of Moscow, Idaho, and Pullman, Wash. The area is a highly productive agricultural region where glyphosate is routinely used in farming practices.

Ten of the women reported living on or directly adjacent to a farm or ranch, 23 of the women described their personal diet as conventional and 5 had personally mixed or applied glyphosate sometime in the past.

The study detected neither glyphosate nor any glyphosate metabolites in any milk sample, even when the mother had detectable amounts of glyphosate in her urine.

Urinary glyphosate levels were either non-existent or extremely low and not of concern, McGuire said. Additionally, no relationship was found between subjects who self-identified as consumers of conventionally grown foods instead of organics and urinary glyphosate levels, nor was there a difference between women who lived on or near a farm and those who lived in an urban or suburban non-farming area.

Analyses of the milk samples were conducted both in Monsanto laboratories in St. Louis and independently verified at Wisconsin-based Covance Laboratories, which is not affiliated with the WSU/UIresearch team or Monsanto.

"In conclusion, our data-obtained using sophisticated and validated methods of analyses- strongly suggest that glyphosate does not bioaccumulate and is not present in human milk even when the mother has detectable glyphosate in her urine," McGuire said. "These findings emphasize the critical importance of carefully validating laboratory methods to the biological matrix of interest, especially when it is as complex as human milk."
News Articles
More Articles All Articles
About