Hank Campbell
In the fall of 2003, Starbucks tested a new latte in two cities and autumn hasn't been the same since. The pumpkin spice craze was born.

How did it all happen? We can thank free market economics. The company already had Christmas locked up with cups and flavors, like Peppermint Mocha and Eggnog latte, and wanted to do the same for Halloween. Or Thanksgiving. Whatever period lasts as long as Christmas seems to, they wanted to make money and the way to do that was to come up with something new, or at least new for their customers.

Some cinnamon, nutmeg, and clove later and they had...pumpkin? Yep, except for some whipped cream on top there was no pumpkin in at all.

It didn't matter. These were a hit and hundreds of millions of lattes have been sold since. Culture followed. This year, everything is pumpkin spice. 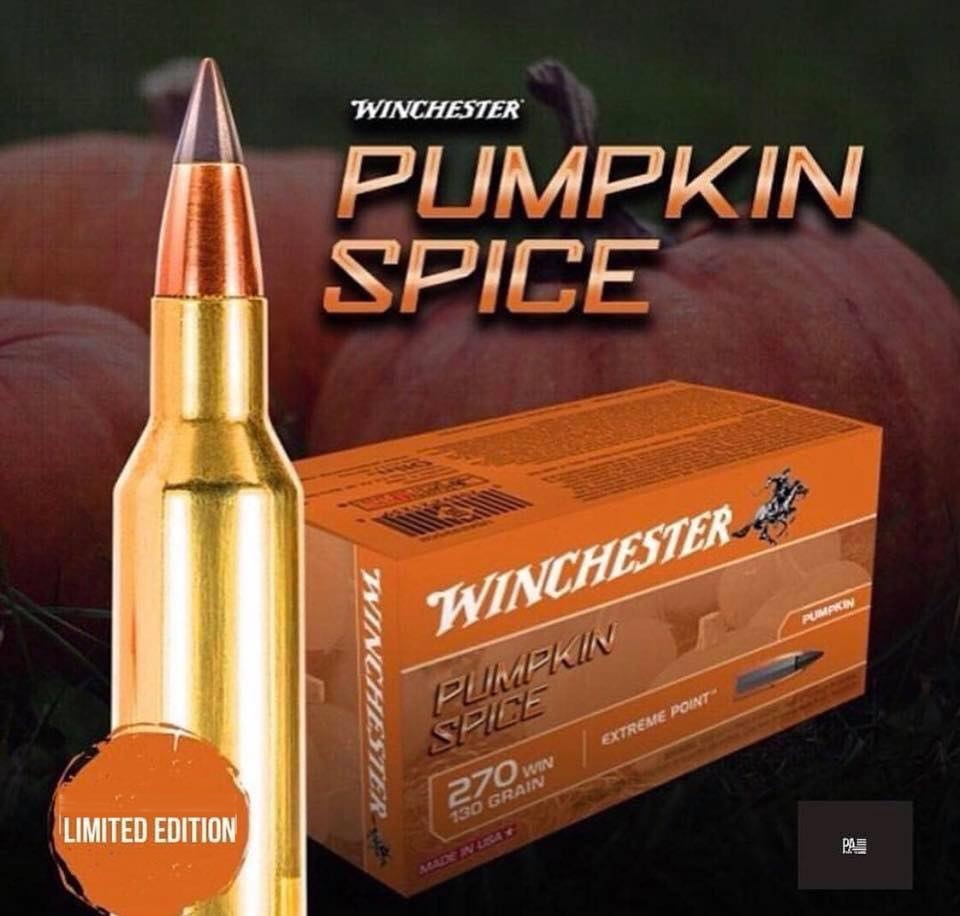 Credit: Unknown, but if Winchester had been this market savvy they'd still be in business, and not just a brand name licensed to Belgians.

Like decorations for Christmas, pumpkin spice has become the harbinger of fall. Like Christmas decorations, someone will complain it's happened too early. And like with Christmas dinner, some Food Nazi will complain about how "organic" it is and try to ruin it.(1)

Fall used to belong pretty much to apples. Pumpkins were for Halloween and then you made pumpkin pie for Thanksgiving. Not much happened in between those two holidays. Growing up in Pennsylvania we had apple everything in the fall and maple everything in the spring.(2) And then things like squash were sort of a concession prize everyone was giving away. I am pretty sure pumpkins, and any other squash, like zucchini, can even grow in concrete, so we always had those because my mother discovered that if she mixed just about anything in sugar and flour I'd eat it. It counted as a vegetable and I was not big on things that really should be solely used as gourds otherwise.

But that was in rural areas. In cities, where most people live, people ate apples, apples, and more apples. While pumpkins have been consumed by people for a few thousands years, apples go back long before recorded history. They were not native to the US, they were so important European settlers brought them. The earliest record of eating locally-grown apples in the colonies was 1630. "Johnny Appleseed" - John Chapman - was a real guy who planted a lot of apple trees, because they were that important. There is a reason a popular saying is 'as American as apple pie.'

Yet in the fall, apple flavor gets trounced by pumpkin spice now.

Apples are still the most popular American fruit overall, beating out oranges by nearly double. What is unclear is how much of those purchases are aspirational, like those bags of leafy greens you see purchased by the armful at farmer's markets that we all know will be thrown out a week later. We know people are drinking those pumpkin spice lattes, no one pays $5 to throw it away. Because anyone can grow them, apples are a tough business. The average apple farm is 6 acres and you get about 25,000 apples per acre. Your profit for 150,000 apples? About $15,000, and that's if you are doing most of the work yourself.(4)

Yet despite the popularity of apples, or perhaps because of it, Starbucks managed to make pumpkin spice the flavor of fall. Sprout Social tracks online data and found that pumpkin spice conversations outnumbered apple conversations by 6 to 1. How many of those are ridiculing some of the more obscene pumpkin spice efforts, like below? That is unknown. 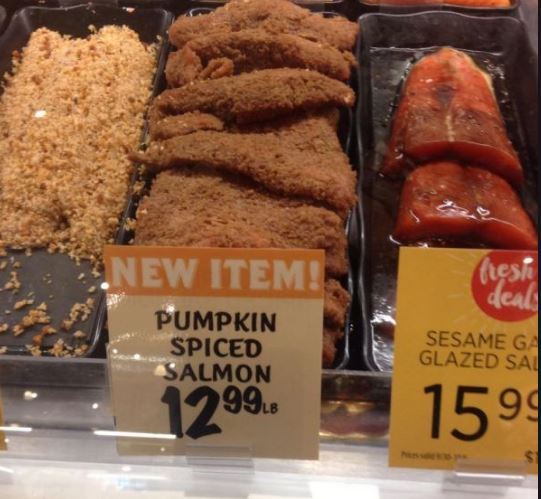 Now that everyone is on the pumpkin spice bandwagon, Starbucks is pivoting again. They just rolled out...wait for it...apple. An Apple Crisp Macchiato. Perhaps in 18 years I'll be writing a new article about the fall from grace for pumpkins.

There remain lots of options that are not apple or pumpkin but they seem more virtue signaling stunts for wealthy people than anything. You can buy Angelic Bakehouse Tarragon Vinaigrette Fig Snack Crisps or Loacker Quadratini Hazelnut Cube Wafers. That doesn't mean anyone will. Autumn is the season of body positivity - letting yourself go and being content about that is all the rage now - so most will forgo Organic Whole Grain Apple Cinnamon Fruit Grain Bars and all those other aspirational gimmicks and settle in for a high-calorie treat. Christmas is only 85 days away and we need to look the Santa part.

(1) Which did happen. The self-styled Food Babe, alternative huckster of the early 2010s, griped about the ingredients in her usual 'if I can't pronounce it you should not eat it' fashion and they added some pumpkin puree.

(2) We had an apple tree near our house and my mother enjoys recounting the tale of how my father once shot at a deer out of the dining room window. He missed the deer farther away but got the apple tree and it caught on fire. The tree was fine. They're pretty resilient.

(3) Everything was called a squash, and yet we always somehow knew what people meant. The Library of Congress says it came down to us from the Native American word askutasquash -“eaten raw or uncooked” - and if you want to eat a raw bowl, you are welcome to it.

(4) That's enough to pay your taxes but how many of us want to work and pay 100% tax? If you pay one of those 80 companies certified by USDA to sell you an organic sticker you can charge more.
Science 2.0
More Articles All Articles
About