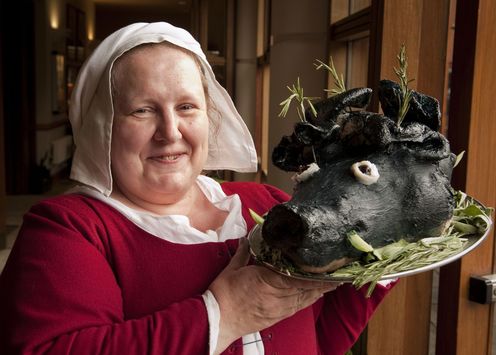 Want something a little different for Christmas this year? Caroline Yeldham, courtesy of the Leeds International Medieval Congress

By Iona McCleery, University of Leeds.

With Christmas almost upon us, there will be plenty of frenzied present shopping and meal planning. Haven’t made that Christmas cake yet? Fear not. If you were preparing the festive meal 600 years ago you’d have far more on your plate.

The picture below is a calendar page from a Book of Hours, a type of prayer book popular among pious rich people in the Middle Ages. Apart from the costumes they are wearing, the people at the bottom of the page seem much like us – keeping warm and enjoying their food and drink. The 12th day of Christmas. Courtesy of the Brotherton Library, University of Leeds., Author provided

It may surprise you to learn that this particular calendar month is January. The feast day celebrated by the couple is Epiphany on January 6, picked out in red (Epyphania). Our Christmases, hectic though they may be, are actually a doddle compared to the traditions of old.

Medieval people celebrated all 12 days of Christmas, from December 25 through to Epiphany – the day the three kings turned up with gifts for the newborn Jesus – although they did not usually feast every day. Some households had their big feast on Christmas Day. For others it was the first of January or the 6th, depending on local custom.

There’s not much detail as to what the couple ate at their winter feast. The artist was more interested in depicting the strawberries and flowers in the margins than in putting food on the table. This is typical of medieval manuscript art. Even elaborate descriptions of royal feasts say little about food. We know even less about what the poor ate, although lords probably feasted their tenants at least once over Christmas.

We do know that preparations for winter would have begun in the late autumn. Humans and animals both ate the same basic foodstuff: grain. Poorer people did not have enough grain for animals over winter so most pigs and cattle were fattened up on acorns and slaughtered.

Calendars commemorate this strategic act for the months of November and December as in the images below, paired with the relevant signs of the zodiac (Sagittarius and Capricorn).

Fattening in November and slaughtering in December. Courtesy of the Brotherton Library, University of Leeds

Of course, the wealthy could continue to keep their animals alive, so they had fresh meat all winter. It’s not true that they used spices to liven up rotten meat: cloves, nutmeg, cinnamon and pepper were imported from India or Indonesia, so if you could afford them you could afford good meat. The rich could also afford sugar – candied fruit, sugared almonds and sweets have always been popular Christmas treats.

The poor would have eaten sausage and bacon instead, salted fish if they could get it, stored or dried apples, peas and beans, perhaps a bit of honey, and would only have had the added flavors of onion, leeks and garlic. Even salt was expensive. The hungriest time was actually not the months that we associate with winter cold, but the months of April and May. It was then that stores had run out and there would be little growing yet in the garden.

Nor was there much dairy as hens naturally lay less in winter and cows don’t produce milk until after they have their spring calves.

The best way to find out what the wealthy ate is to turn to their financial accounts and cookery books. Cookery books such as the Forme of Cury, written for the household of King Richard II (1377-1399), provide some tasty recipes. For a recent project we made recipes from this text and others for the public to try at festivals and markets around Yorkshire.

In Castleford Market in December 2012 we prepared seasonal tastes such as gingerbread, mutton stew (mounchelet) and apple pudding (pommesmoile). An opulent Christmas feast. Courtesy of the Brotherton Library, University of Leeds

But it was nigh on impossible to prepare the main dishes that the rich had at their feasts. Turkey originally came from the Americas so was not found on English tables until the late 16th century. It probably replaced a showier but much less tasty bird: the peacock. The price of these birds meant that most people had to be content with another large expensive bird, the goose, which was a traditional Christmas main course until relatively recently.

Also closely associated with Christmas was the wild boar – a boar’s head was often brought into the hall to accompanying carols. But it wasn’t always intended for eating.

And then elaborate displays of prepared meat, sugar or wax in the form of fantasy animals, angels and castles were often part of the entertainment, sometimes even moving mechanically or exploding.

So count yourself lucky as somebody who won’t go hungry this winter. You may have left the pudding quite late but you can leave the peacock and pommesmoile for next year.

Iona McCleery, Lecturer in Medieval History at University of Leeds, receives funding from the Wellcome Trust (Society Award no. 092293).