Hank Campbell
Neuroscience is still in its infancy, despite claims by people using fMRI to suggest links between lots of things, but a few things are established, like that fear 'resides' in the amygdala.

Linking that same part of the brain to obesity in mice, and therefore humans, in a new paper warrants more skepticism. Mice are, as famously stated when science was science, not tiny people. We do have things in common with mice, just like we share 60% of our DNA with bananas, but no one suggests their study on bananas has 'implications' for humans the way every trial lawyer running a grift and wanting to sue an agriculture company suggests about mouse models.

One thing we share in common with all other animals is that we like delicious food. Companies want to sell what people like so they make delicious food.(1) Because correlation is poorly understood in modern times, 16th century peasants seemed to understand it better than everyone at Center for Food Safety, we get claims that some type of food - Doritos or whatever - are addictive. A few, like the science leader on the Narcissism Index, Dave Goulson,(2) even try to invoke biology, but it is unsatisfactory in the science world unless a plausible mechanism that makes certain people lack impulse control is discovered.(3) 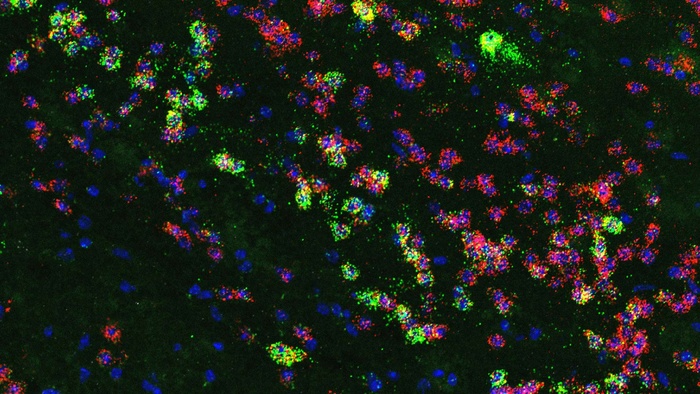 IPACNts neurons, in green, in the brain’s amygdala are correlated to mice eating even when they’re not hungry. Credit: Bo Li Lab/CSHL/2022

In the study, when the neurotensin-expressing neurons in the mouse version of the fundus striatii, the clunky-named interstitial nucleus of the anterior commissure (IPAC) were active mice ate delicious food even after they were full. When these IPACNts neurons were shut off, the mice only ate until they were no longer hungry. They didn't just keep eating chips like I do during the World Series (I predict the Astros in 4 games, if you are asking.) Behavioral interventions are always best - learn to control your impulses, people, the food you happen to like is not addictive - but after that it gets trickier. In a world of body positivity, obese celebrities are to be applauded even though they are clearly at high risk for nearly as many diseases as smokers, but poor obese people may not get applauded, they may get the 'we have to pay for your health care so we can tell you how to live' argument from a government that just told every employee they'd be fired if they exercised body choice about a vaccine.

An intervention could mean medication, but today those have side effects. Will there one day be a way to manipulate neurons for people who won't control their eating?  We'll see.

I don't blame food because I am not a supermodel, but I also don't think I'd miss eating all that much.(4) It could happily be something I do as part of a routine, like brushing my teeth.

(1) Apple sets out to make phones that you want to use all of the time, and to achieve that they combine aesthetics technology, and marketing. Food companies do the same thing with their products, yet a desire to eat potato chips gets dismissed as addictive chemicals in a corporate conspiracy, while two generations of zombies staring at their phones are laughed off.

(2) Maybe even the world. The Narcissism Index is how much time you spend on Twitter to reach the fewest people. Among prominent people - and Goulson is prominent in the anti-community because he says obesity in donut eaters is not caused by too many donuts but because he can 'detect' glyphosate in donuts - with the same number of Tweets, he is the top narcissist. 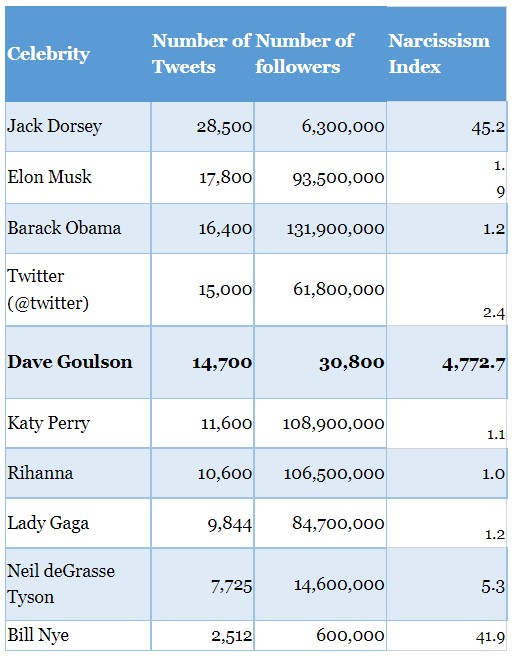 (3) Generation X was the last 'free range' group of young people, but also the first to have plentiful, affordable food. The World War II generation grew up in a Depression, so unlike today's economy where government just prints all the money it wants to give to government unions and creates inflation, there was deflation. Money bought more but there was far less to buy. The Baby Boom after World War II also saw an increase in prosperity and the kids grew up in a disposable world - but food was still a problem. That is why doomsday prophets like Paul Ehrlich and John Holdren got so much Population Bomb and Ecoscience traction with their claims about food.

But science ignored them at that time like smart scientists do now, and instead set off an agriculture boom that made it possible for even poor people to get fat. For the first time in the history of the world. Cultural evangelists pivoted from saying starvation would occur thanks to evil corporations to saying obesity would occur thanks to greedy corporations. This nonsense was aptly ridiculed in the Mike Myers comedy "So I Married An Axe Murderer."

(4) I didn't miss driving, but California has driven Lyft and Uber to the point of destruction with regulations. Now they are demanding that Uber drivers buy electric cars so gig economy drivers have a referendum in November to place a small tax on the "super rich" to subsidize the electric cars Governor Newsom is forcing everyone to buy. Who opposes a tax on the super-rich to combat climate change without hurting the poor? Governor Newsom and the Democratic party and the super-rich in an economy that is bigger than the entire country of Germany.
Science 2.0
More Articles All Articles
About