Louisiana Has Important Things To Worry About, Lawyers Shouldn't Invent A 'Cancer Alley' To Pile On
By Hank Campbell | August 31st 2021 04:01 AM | Print | E-mail

Hank Campbell
During the COVID-19 pandemic, the American public fell back in love with science. In the first 19 years of this century, Californians denied vaccines to such an extent a law had to be passed to prevent coastal parents from creating a Whooping Cough pandemic. Every building had cancer warnings somewhere - even oncology wards in hospitals warned cancer patients they might get cancer by visiting their doctor - and Non-GMO Project rock salt(!) took off.

That has now changed.(1) For most of the country, Purell, Clorox, and Lysol replaced bottles of useless green-labeled goop that claimed to be natural alternatives. People wanted what worked.

That has the lawyers who run environmental groups in a panic because a public that trusts science is a terrible jury when you want to try and suggest baby powder will give you cancer. The lawyers got a bit of a boon from America's new President when he made an offhand remark that Louisiana had an 85-mile long "cancer alley." 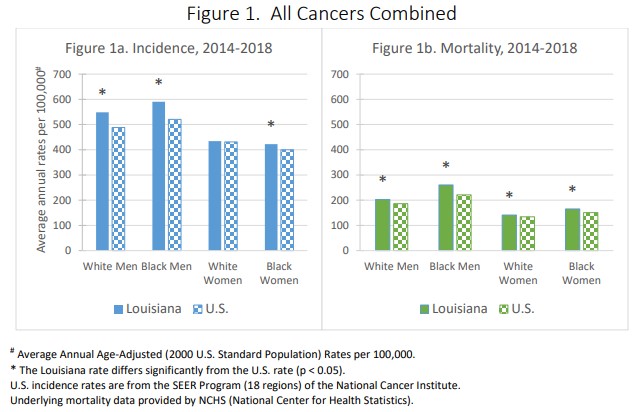 If this were the 1990s, that would be manna from heaven for lawyers, yet if they were hoping for a new "Erin Brockovich" case, all they got was a modern Tom Girardi. The problem lawyers face in 2021 is that it is more difficult to pay a PR firm to get shock journalism to repeat just-so stories that people are keeling over from cancer - they are pretty much stuck with The Guardian, Mother Jones, and a bunch of crackpot websites hoping to invoke "environmental racism." Hinkley, California residents, for example, the chromium-6 'pollution' case that made Girardi and Erin Brockovich famous, don't have higher levels of cancer and never did. Girardi knew that, as did PG&E and every cancer expert, but Girardi knew it would not matter to a jury - only emotion did.(2)

Science did not matter back then, but the public are a lot smarter now.

The problem with averages is they are scientifically meaningless

Of course there will be cancer clusters at various points in time, just like there are cancer-free zones. That is the way statistics work. If we only look at the first week of the baseball season, the average for all players might be the same but someone would be at .400 and someone would be at 0. Lawyers could sue over that player stuck at 0 and they could even find an epidemiologist who'd link terrible performance to Big League Chew.

Because of exploitation in the past, rigor was demanded and data on cancer are now pretty comprehensive. The Louisiana Tumor Registry does not show any "cancer alley." It only shows that cancer in Louisiana is higher than the national average.

Lots of things impact that; big causes are lifestyle, like smoking and obesity. Then there is genetics. Cancer statistically linked to environmental causes is a tiny blip compared to those.(3) It is shady epidemiology to claim it, but epidemiologists make a lot more money being expert witnesses for attorneys than they do at their jobs so it isn't a shock so many try to link things to cancer.

If environmental lawyers really cared about people, they'd donate to nonprofits like ours that educate the public on the health risks of lifestyle choices, not look to get their spouse on the next Real Housewives show by becoming rich demonizing science for personal gain.

Louisiana has enough going on with the devastation from Hurricane Ida, they don't need to be told by Democrats that having jobs is killing them too.

(1) For now. Coastal elites still hate vaccines but they don't want to look like Republicans so they take them; they just now refuse to believe they work and demand that everyone still wear masks.

(2) A documentary contends that scaremongering science wasn't even close to extent of the questionable practices Girardi used before and after he got a shakedown payment from Pacific Gas and Electric. All he had to do was get a jury to believe the average was higher and that a company was the cause.

(3) Epidemiologists live for statistical blips, though. It is why they were the last to accept that cancer has genetic causes, long after the science and medical communities.
Science 2.0
More Articles All Articles
About