Chemicals To Put Out Fires Are 'Riskier' For Firefighters Than Actual Fires? Not According To Science
By Hank Campbell | May 10th 2021 09:39 AM | Print | E-mail

Hank Campbell
A new paper uses emotional verbiage like "forever chemicals" and sketchy correlation to try and claim that fires are not what firefighters should be worried about when the alarm rings, it's the chemicals created by Evil Corporations they should fear.

Firefighters are going to be enraged if they see it, and they should be. It puts their lives at risk. This is not junk science, it isn't science at all.

Polyfluoroalkyl substances (PFAS) are compounds in use since the 1940s in too many useful and safe (and safety) products to count. In the eternal quest to find new things to raise money about and sue over, environmental lawyers have increasingly targeted them. A small state like Vermont, a popular target for the anti-science fringe, even had the House there propose a ban on perfluoroalkyl and polyfluoroalkyl in, of all things, ski wax.

It's also irrelevant. We can literally detect anything in anything at this point, as long as you accept parts per quadrillion as meaningful. Except it isn't. It makes scientists angry when activists do it, because it is homeopathic belief in mysticism to claim traces of anything are killing us. It should make the public angry as well, because our tax dollars pay for this nonsense.

In a post-pandemic world, now that even the most left-wing people have embraced science like cleaning products and vaccines again, so it's good to be skeptical of claims about PFAS for two reasons; math and money. 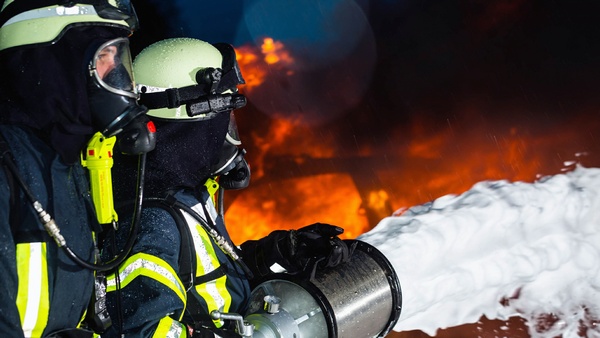 You can't trust the math - in this case statistics - in this new claim because it has become common for activists to create a belief, wrap it in meaningless data, and pay someone to publish it in a journal. Any journal. Including a company that made its way onto the list of "predatory" publications for good reason. International Journal of Environmental Research and Public Health is a pay-to-publish imprint of Multidisciplinary Digital Publishing Institute, which was prominent on the Beall's list of predatory publishers before it was taken down due to pressure on his university by...wait for it... Multidisciplinary Digital Publishing Institute.

MDPI is the same company that took money from fringe conspiracy theorist Stephanie Seneff to publish her paper claiming a weedkiller causes autism, obesity, cancer, multiple sclerosis, and everything else - without providing any evidence. The company is well-known for spamming every email they can find (almost 900,000, according to what hackers got during a data breach) soliciting articles they will publish if you have money, and for which peer review will solely consist of formatting done in China.(1)

If you read the paper you can see there was only peer review in the same way a believer in astrology might peer review a paper claiming a Sagittarius is more likely to be skeptical. It is believers, not critics, which is the opposite of what peer review is supposed to accomplish. Real peer review asks questions any smart person would ask. Do firefighters die of more heart attacks than the average? The answer is yes, and the Fire Fighter Cancer Cohort Study does show that. Do they get more cancer than the average person? Yes.

Both of those are due to two things: one is age. The longer you live the more likely you are to die of a heart attack or cancer. Age is the biggest risk factor for almost every mortality. Most firefighters are fit, so they will actually live longer, outside a work accident.(2)  The second is smoke. Smoking is the world's greatest lifestyle killer. There is no debate on that. Firefighters, regardless of great protection, inhale more smoke than non-smokers. That can lead to cancer.(3) 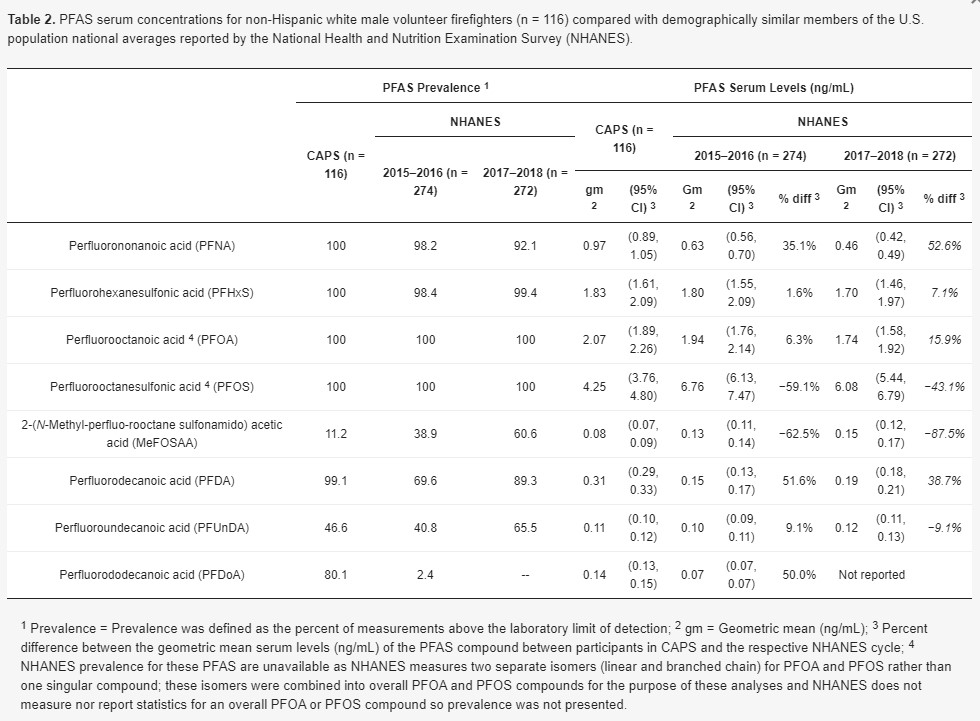 Despite a specious foundation, the paper claims statistical significance, which is meaningless. And yet the authors can't find a single limitation in their paper. I can't recall the last time I read a paper claiming to be epidemiology that didn't address the limitations on their methodology.

Including this one. Their claim comes from a survey of 135 firefighters in a small section of New Jersey and then they correlated those questionnaire results to a table of nine PFAS chemicals. Perfluorododecanoic acid and perfluorodecanoic acid were higher in volunteer firefighters.

So these chemicals put them at risk? No, those are not toxic unless someone sticks a tube into the stomachs of rats over overdoses the animals on them. At such tiny levels - claiming 80 more of nearly nothing shows they are not interested in actual relative risk -  they could have gotten it from using nonstick cookware in their house every day. The only reason disease is linked to chemicals in foam is because with 4,000 different PFAS chemicals out there you can find them in anything. Which means you can correlate chemicals in foam to cancer as easily as I can correlate organic food to lower fertility in men.

Don't want to ban chemicals and make lawyers rich? Why do you hate firefighters?

That's really what this paper sets out to achieve. It certainly isn't about public health of a small group of volunteer firefighters in one small part of New Jersey. That is such an oddly narrow bit of data dredging even Environmental Health Perspectives might not have let it through peer review.

(1)  Even if the journal were credible, there is a lot of room for skepticism by scientists. Far too many epidemiologists in the food and chemical activism space use statistical manipulation to claim with "statistical significance" that a chemical is harmful without using any science. I once sent an employee to "debate" whether or not trace chemicals detectable in a pizza box are making more people obese than eating the pizza. I put debate in quotes because no one serious could be found to make the 'for' argument - despite it appearing in progressive outlets like Mother Jones and Guardian - so an agreeable fellow took up the mantle just so there could be a talk.

If an epidemiology paper is provocative enough to appear in The Guardian, which is basically a successful Mother Jones except in England, the rule of thumb for scientists is it won't be science.

(2) They have risky jobs so their chances of a work-related accident are higher than someone working at Kinkos, but that has nothing to do with chemicals.

(3) Discovering the link between smoking and all kinds of diseases lent an aura of credibility to epidemiology that was then exploited by activists in the food (Miracle Vegetables! Increased Mortality!) and chemical (Endocrine Disruption! Increased Mortality!) spaces. A field that was once so conservative it refused to accept that there was a hereditary aspect of cancer now rushes to publish anything data dredged until p>.05. And COVID-19 means a new wave of credibility for a field that was so in disarray insiders had been wondering if should be abandoned - and that means a new wave of dodgey claims about car seats, breast milk, and Manwich cans. All with no biological plausibility of any kind.
Science 2.0
More Articles All Articles
About