Hank Campbell
Environmental Working Group, the trial lawyer organization that claims modern pesticides are killing us but the old kinds labeled as "Organic"(™) create healthier families,  has a new conspiracy tale out, this time that a "chemical cocktail" in plain old drinking water is causing 100,000 cases of cancer per year.

While USA Today (they'll blame Trump) and New York Times (they'll blame scientists) are sure to cover it, you don't need to be concerned. Like everything EWG does, this is manufactured hype.

They may have fabricated a new chemical scaremongering analytical framework to test the waters of a new lawsuit or fundraising campaign or whatever but it is the same old debunked "chemical cocktail endocrine disruptor" nonsense that has failed science scrutiny for the last 25 years. 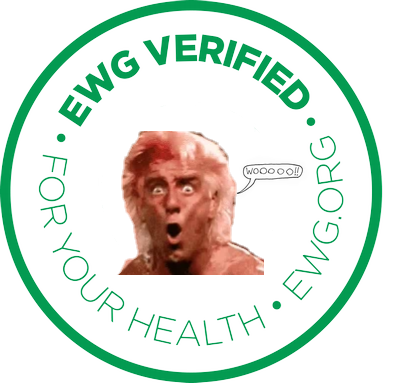 Using their woo-based analytical framework they claim they can prevent 100,000(!) cases of cancer if Evil Big Science would stop putting their chemical cocktails into drinking water. Oncologists and researchers will be clawing out their eyes reading that, as they should, but it is really up to us, the public, to put a halt to their belief in homeopathy and sympathetic magic.

If you are scientifically literate you know the dose makes the poison. Paracelsus noted in his Third Defense that for any chemical there is what we now call a no-adverse effect level (NOAEL) and then a level that is hazardous. It applies to coffee, aspirin, pesticides, you name it. Take enough of anything and it can be poison. It's so well-known we have been delighting fans of science with counter-intuitive examples on our coffee cups for 12 years.


The 2019 mug on my desk as I write this. CLICK THE IMAGES FOR FULL SIZE. If you want one for yourself, we send them free of charge to people who make a $100 donation either through the site or via check. We change them every year but water will not be on it in 2020, no matter what EWG claims. Some things are too ridiculous.

Environmental Working Group, aided by by hype from Fred Vom Saal and a variety of homeopaths, argue that is not true, that instead of a safe level for chemicals there is a U-shaped curve; stuff happens at high levels, but not at normal levels, and then happens again way down at the micro level, a drop in 60 Olympic-sized swimming pools or something. And that effect can be stated as positive (Zicam homeopathy claims it will relieve your flu "symptoms" two hours earlier) or negative (any detectable chemical can disrupt hormones.)

Lacking any proof of the latter over the 25 years, anti-science activists began to throw together names of all kinds of chemicals and insist EPA had not studied them combined that way before approving them.

And they are right, scientists also don't study the impact of each fly's wings gravitational pull on the moon before sending robots to Mars. Because that would be stupid.

As stupid as the premise of Environmental Working Group's claims about science here.

But math is a language and using language you can say time travel might be possible, so the language of math is how EWG writes its latest science fiction; Publishing in something called Heliyon (3) they say their custom analytical framework added up what they claim are the combined health risks of carcinogens (which are themselves based on mouse studies and statistical inference) in 48,363 U.S. water systems in the U.S. and claim that if those compounds are actually causing cancer, then they can prevent 100,000 cases of such cancer by simply banning everything.

They added up all of the chemicals that statisticians claim might lead to higher risk of cancer to claim they could prevent cancer deaths they don't know were caused by chemicals? That is like the Astrology crowd writing about ancient architecture by citing a UFO Conspiracy paper as fact.

They don't show they are causing cancer, they didn't run any tests - this is mathematical fiction

Since we are only dealing with math, and by people who don't do it very well, they have no clue if anyone has ever died from their trace level chemical cocktail, all they do is take the correlation of each chemical and add them on top of each other. While biologists will be shocked when this gets mainstream media attention, it will be a surprise if mathematicians don't go all 350.org on them and put students in masks to invade the homes of the authors.(4)

EWG trots out the anti-science trope that chemicals are only proved safe in tests of that chemical and EPA scientists must be stupid. They insist that EPA does not consider magical effects and force companies to spend an extra $5 billion running tests on every other possible chemical in the world before granting approval and therefore the science is bad.

Mainstream toxicologists, chemists, and biologists know that is gibberish.

EWG wants to push a lot of buttons so they name drop radiation - the anti-science progressives who are their demographic also hate nuclear everything and overwhelmingly believe cell phones cause cancer, just like they hate agriculture and vaccines - arsenic (at lower levels than you would get from eating 8,000 apples a day for life), and more. They cast a big net, as fundraising campaigns do.

Olga Naidenko, Ph.D., EWG's vice president for science investigations (who even testifies in friendly anti-science venues like California that cell phones cause cancer, showing no understanding of physics or biological reality despite having a degree) concedes that water for Americans is safe - unless you believe in EWG magic and that chemical "cocktails" create some sort of compounding effect that the science consensus cannot detect.

Maybe Dr. Naidenko believes failed rocket launches occur due to fly wings flapping too. In homeopathy world, or on Nibiru or whatever planet this might count as science, anything is possible.

At this point promoting the Dirty Dozen List is just lying.(1)

If you search on a clean machine (no cookies based on your Amazon shopping and whatever) there are no prominent media outlets promoting their nonsense and getting search authority for them. 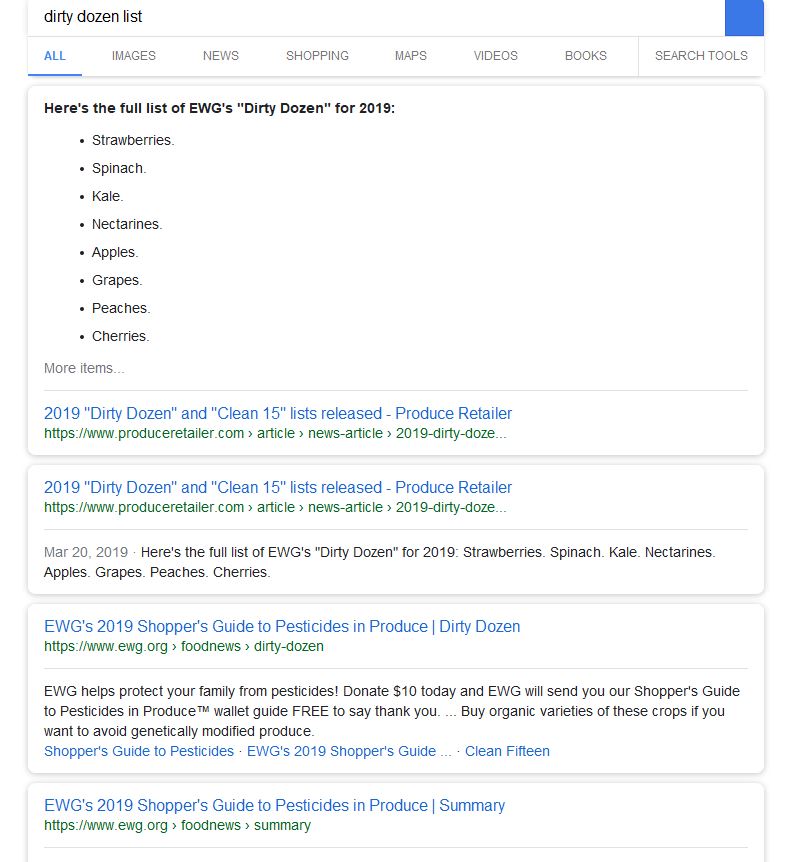 (3) You can also find articles on vaccines "hesitancy", which in environmental codespeak for vaccine denial, the JFK assassination and whatever science fiction quantum mechanics writers with too much money are writing about these days. 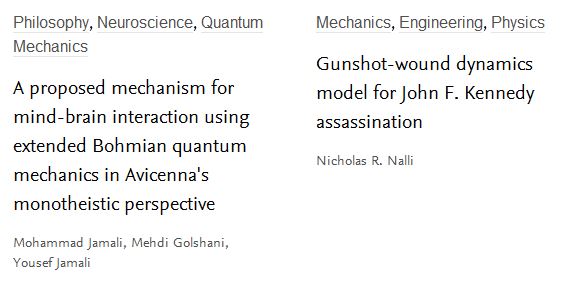 (4) On Twitter, his wife denied that he even pays students to protest (though only students that protest get his $100 "grants) so she is sure to deny he ever endorsed this KKK-style attack, complete with masks and torches. It didn't help that they put the picture on the website (now deleted - that is the archive.org version). 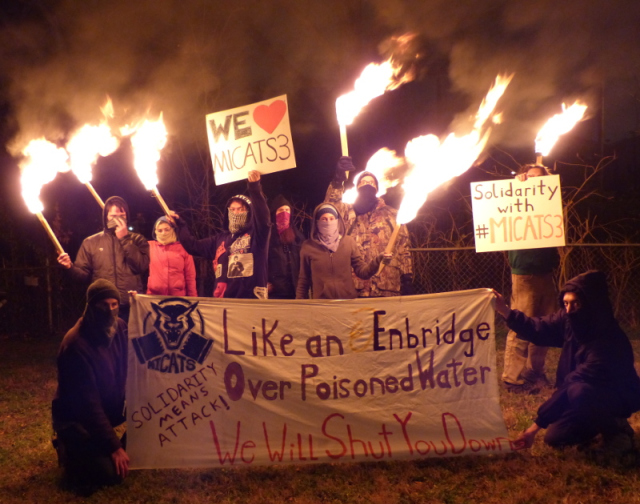 And if she wants to gaslight the public by pretending he did not endorse it, just because he deleted his tweet doesn't mean it didn't happen. 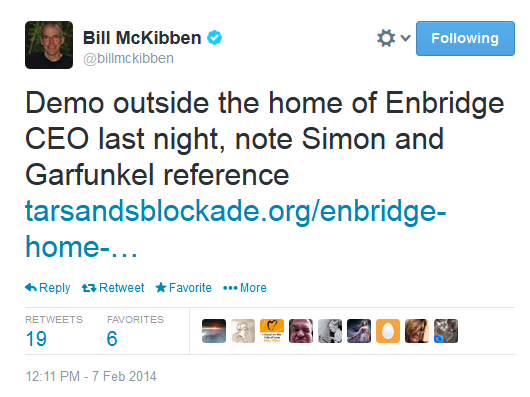