Hank Campbell
When we think of racial bias we usually think about differences when being stopped by the police or being watched more closely in a small deli, but there is another facet of it, an indirect bias by people who otherwise behave in ways that seem diverse and tolerant. In a recent preprint paper, the authors concluded that white liberal politicians and individuals engage in "competence downshift" when talking to minorities while conservatives don't. Liberals downplay their own verbal competence and use more emotional language. It's like mansplaining, except for people of color.

Politicians have long engaged in theater, often good and rarely truly bad. Former Massachusetts Gov. Michael Dukakis looked incredibly out of place in a tank in 1988, for example, and in a video from earlier this month, another former Massachusetts Governor, Utah Senator Mitt Romney, looks like he's had a servant blowing out birthday candles for him his entire life, but for the most part they do quite well. Politicians usually know who they are speaking with and appeal to them adroitly.(1)

What about their hidden beliefs?

For that, an analysis of decades worth of speeches is more telling than a single event. As are experiments where participants determine how to communicate someone. Such studies found something deeper than theatrical photo ops or tailoring speeches to the audience: "White liberals self-present less competence to minorities than to other Whites—that is, they patronize minorities stereotyped as lower status and less competent."

The paper for the Journal of Personality and Social Psychology is interesting because how racist people react in situations with minorities is well-traveled ground but how good-intentioned people behave gets far less study.

It's still bias if you mean well

In the first part of the study (there are five components) the authors examined 74 speeches by white presidential candidates during a 25-year period, half for a mostly white audience and half for a mostly minority audience. They were looking for language that related to ability versus words related to warmth. As they describe it, “supportive” and “compassionate” are friendly, warm words whereas “assertive” and “competitive” relate to ability or status.

Among Republicans there was no statistically significant difference in speeches regardless of the ethnicity of the audience but Democrats used fewer competence-related words in speeches for minority audiences than they did whites.

There was no meaningful difference in usage of words related to warmth for either. 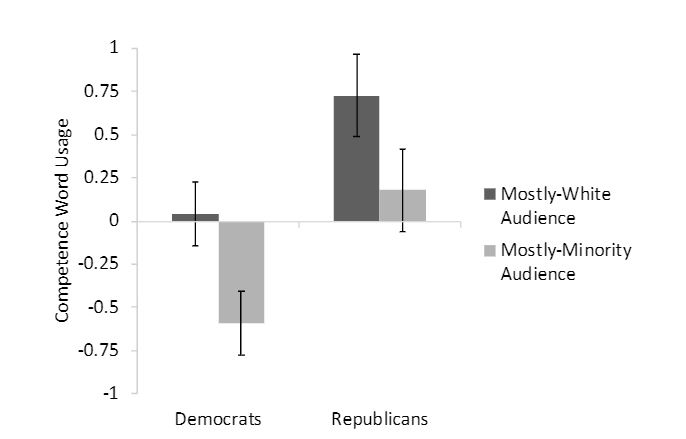 Are conservatives prejudiced and just hide it better?

Some will read this and argue that their conservative counterparts are more prejudiced but hide it better.(2) In another experiment using undergraduate students (100 women and 53 men) who identified as White the authors sought to find out.(3) Each participant read a book club scenario in which a new member was to write the Secretary of the group, who was named either Emily or Lakisha, with a review of a book for the monthly meeting. In the hypothetical email they were going to send the Secretary they were asked to score 24 words which had been ranked for warmth or competence by a separate group. The scoring of each word was based on how warm or competent the sender would appear to the Secretary, not how warm or competent each word seemed to the sender.

Though two thirds of the participants were women, there was no gender difference in the results. Instead, similar to the analysis of Presidential speeches, those who identified as more liberal engaged in more competence downshift, selecting words that would make themselves appear significantly less competent with Lakisha, a name chosen because it sounds more stereotypically black than Emily, which was chosen to be more stereotypically white. If conservatives had the same bias but were hiding it, it would have shown more when they were scoring words as to how it might make them appear to another person. That didn't happen. 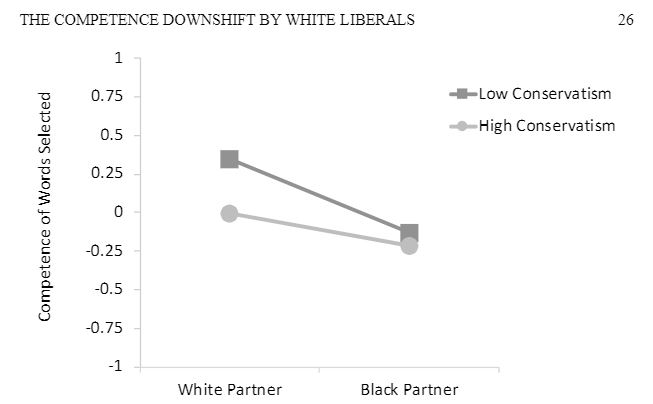 The difference again was in competence words, warm words were basically unaffected. The trend was the same across all five studies in the paper.

Though whites across the political spectrum have obviously supported more minority candidates, there were an estimated 1,500 Black elected officials in 1970 but over 10,500 in 2011, the authors note, and actions matter more than hidden individual beliefs, it may be that indirect bias and stereotypes still remain.

But why? One of the most literate and engaging Presidents in history was a minority, surely more liberal people would believe stereotypes less due to President Obama's impact.

It's hard to draw a conclusion on that. It could just be a generational issue and 20 years from now this will have disappeared, thanks to the current generation at least appearing to be less racist.

I have simplified a lot of this paper, and it is certainly open to criticism, starting with their methodology, so it might be helpful to read it with a keen eye for the details, but I'd like to know what you think.

(1) While urban people may assume rural communities are hicks and politician speaking to farmers shouldn't make a joke about whether to bring the Rolls-Royce or the Bentley given the cost of the trucks in the parking lot, some farmers do darn well for themselves. When you own tractors that cost $100,000 each, you aren't impressed by a BMW 5 Series.

(2) In the real world it makes no difference, because thoughts are different than behaviors and behavior shapes the future. If one person is overtly prejudiced while claiming another secretly is, only the overt behavior will be remembered in the future. It's why negative stereotypes about races began to be criticized in the 1960s. No President was more racist than Lyndon Johnson but he signed the Civil Rights Act of 1964. He signed it into law even though it was more favored by Republicans in Congress (80 percent in both Houses) than his own party (61 and 69 percent). His behavior mattered more than his sentiments to his advisers.

(3) Confounders abound, of course. They were all at Princeton and participated in exchange for a chance to win a $25 gift card, so it's hard to know how many would have done it regardless. Money may instead be an equalizer. Most rich people who are not celebrities (and therefore won't have their restaurant bill posted on Twitter shaming them if they leave a normal tip) look at $25 as $25 they'd rather have - they wouldn't dig a ditch to save it but answering some questions, sure.
Science 2.0
More Articles All Articles
About