It used cover crops to reduce tillage - the thousands of years old approach of preparing soil by plowing or overturning soil - in organic field crop production systems. Since organic food is now a gigantic $130 billion industry the scholars wanted to see if domestic organic soybeans could be competitive with their modern scientific counterparts. To become competitive among a wider socio-economic demographic, organic farmers need to reduce costs and they can't do that when they limit themselves to older pesticides that require more applications and intensive labor. Aquaponics are also threatening to erode their business, since organic industry trade groups contending that chemicals their lobbyists choose to use in soil are better than using no soil at all have been unconvincing to the public.

The scientists compared regular soybean production after a cover crop mixture interseeded into corn, to reduced-tillage soybeans after a roller-crimped cereal rye cover crop after a corn silage forage crop. 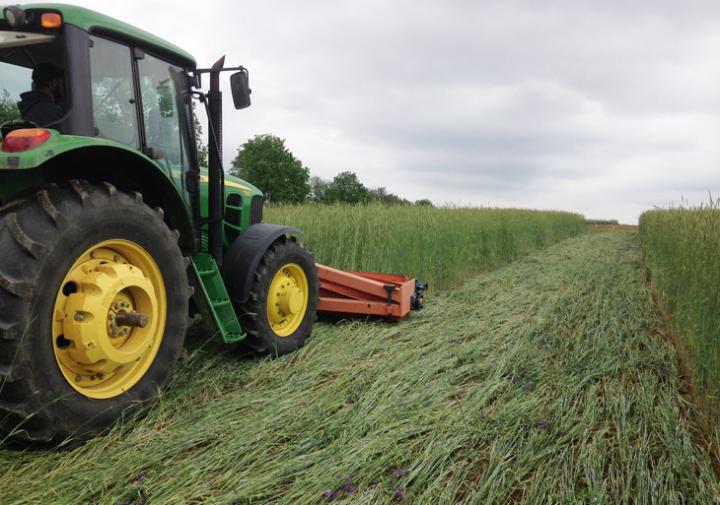 In that process, there was 50 percent less 'soil disturbance', which is desired by people who worry about soil conservation over food.  So the environmental halo remains in place, but though reduced-tillage meant reduced input costs it will be $46 per acre less profitable because of lower yields. Since soybean revenue is just over $500 an acre and farming operates on razor-thin margins a loss of 10 percent is a lot of money, so prices would need to remain high if the corn-soybean-spelt organic cropping system is going to work.

Since organic soybeans are not yet viable how do organic foods use them in everything? They have a bit of a cheat. Though domestic organic food has some fraud that is mostly at local farmer's markets where small groups are exempt from any standards. Organic imports have no criteria at all. Studies by independent groups have found endemic fraud in imported organic food. Not as systematic as olive oil but still common. India and Turkey are happy to sell Americans 'organic' soybeans that are not organic, since they know they can't really be caught and it makes no difference. The food is identical and no activist groups want to damage their allies by doing surprise spot testing of organic food.

So if fewer rotors for crops makes organic shoppers feel better, this could work as long as they continue to pay a premium. But I predict that 'no soil damage at all' aquaponics will overrun the conventional organic marketing groups that remain stuck in the past.
Science 2.0
More Articles All Articles
About