Hank Campbell
2020 started out being a weird and devastating way to end the decade yet we naively thought those Australian wildfires were as bad as it could get.

Now people outside that country barely remember they happened. Because then we got coronavirus. Luckily, we dodged the murder hornets but then went right to race wars. New York, the city, county, and state, has had the worst of both COVID-19(1) and the looting, but fear not Manhattan, June is probably as bad as it gets for 2020.

Well, maybe, unless July really has a surprise in store.

Screenshot: the 1996 "Independence Day" film, where American exceptionalism showed we are so awesome we can even use a Macbook to take down aliens capable of faster-than-light travel. And we'll turn July 4th into a world holiday while we do it.

Well, an alien invasion is not going to happen(1) but something else that sounds like terrifying science-fiction is actually close to reality.

Generally, no one wants cockroaches. I have seen them in nice New York hotels, I have had them in expensive Upper West Side New York apartments. They're as disgusting as people who don't live in crowded, pest-infested places think. New York may not want them, but cockroaches find a way to forge ahead. That's actually a good quality in robot cockroaches.

Harvard engineers have prototyped new, smaller cockroaches, about the size of a penny and dubbed Harvard Ambulatory Microrobot-JR. HAMR-JR is smaller than its predecessor, HAMR-VI, but it can skitter about - 14 body lengths per second is downright scary - and carry loads almost as well. No, they assure us, it will not climb up the inside of the drains of your sink. At least not yet. They developed this new iteration using classic MEMS (micro-electromechanical system) tech(2) such as the piezoelectric actuator.

The beauty of size is greater functionality. While big cruise ships are great for getting norovirus and lots of other acute gastrointestinal illnesses, they don't have a lot of flexibility. Small boats can dock in a lot more places. So critters that can be manufactured at scale based on desired results - speed, payload, whatever - could lead to breakthroughs using metamaterials and mechanical assembly, rolling and folding methods.

And they look really scary so once they have on-board power they will be a lot of fun to unleash at a friend's house. 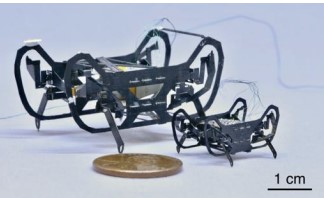 HAMR-JR, about the size of a penny, but lighter.

(1) I actually think we are first and that we are going to be the conquering warlike aliens that future alien civilizations are watching science-fiction movies about when we show up with guns big enough to shoot down their moon. Someone has to be first to conquer space, it can easily be us. Unless you believe in that multiverse mumbo-jumbo, then it could be dinosaurs in top hats who worship the cast of "Charmed."

(2) When I began my physics software career almost 30 years ago MEMS was going to be the next big thing 15 years after it was first done and they are ubiquitous now - almost everyone has an inkjet printer or a cellphone, which incorporate them, and every modern car has an airbag - but they remain a tiny amount of money compared to the many technologies that have passed it by. So they never quite took off. But they are a lot farther ahead than the quantum computing also said to be coming real soon 30 years ago.
Science 2.0
More Articles All Articles
About