Hank Campbell
I didn't even know Scientific American Blogs still existed. They do, they were just irrelevant and no one remembered until a few days ago. Given their recent foray into nonsense, it can be the next place where denier for hire Paul Thacker pretends to be a journalist.

And for a time it was probably successful, although perhaps a little too cultural-focused to gain a science audience it was out there generating content and that is good enough. But once Bora left it fell off the map.

For obvious reasons, I think about blogging a lot, and that means Discover's foray into it, dramatically scaled back now, and non-science places scientists write like Medium and Forbes, but I had forgotten about Scientific American Blogs until Dr. Alex Berezow, VP at the American Council on Science and Health (my co-author on a best-selling book, 2012's "Science Left Behind" - you should go to the Council website and grab his RSS feed), called out a bizarre rant against food by a teacher and someone who has an organic garden or whatever, titled "Broccoli Is Dying. Corn Is Toxic. Long Live Microbiomes!" 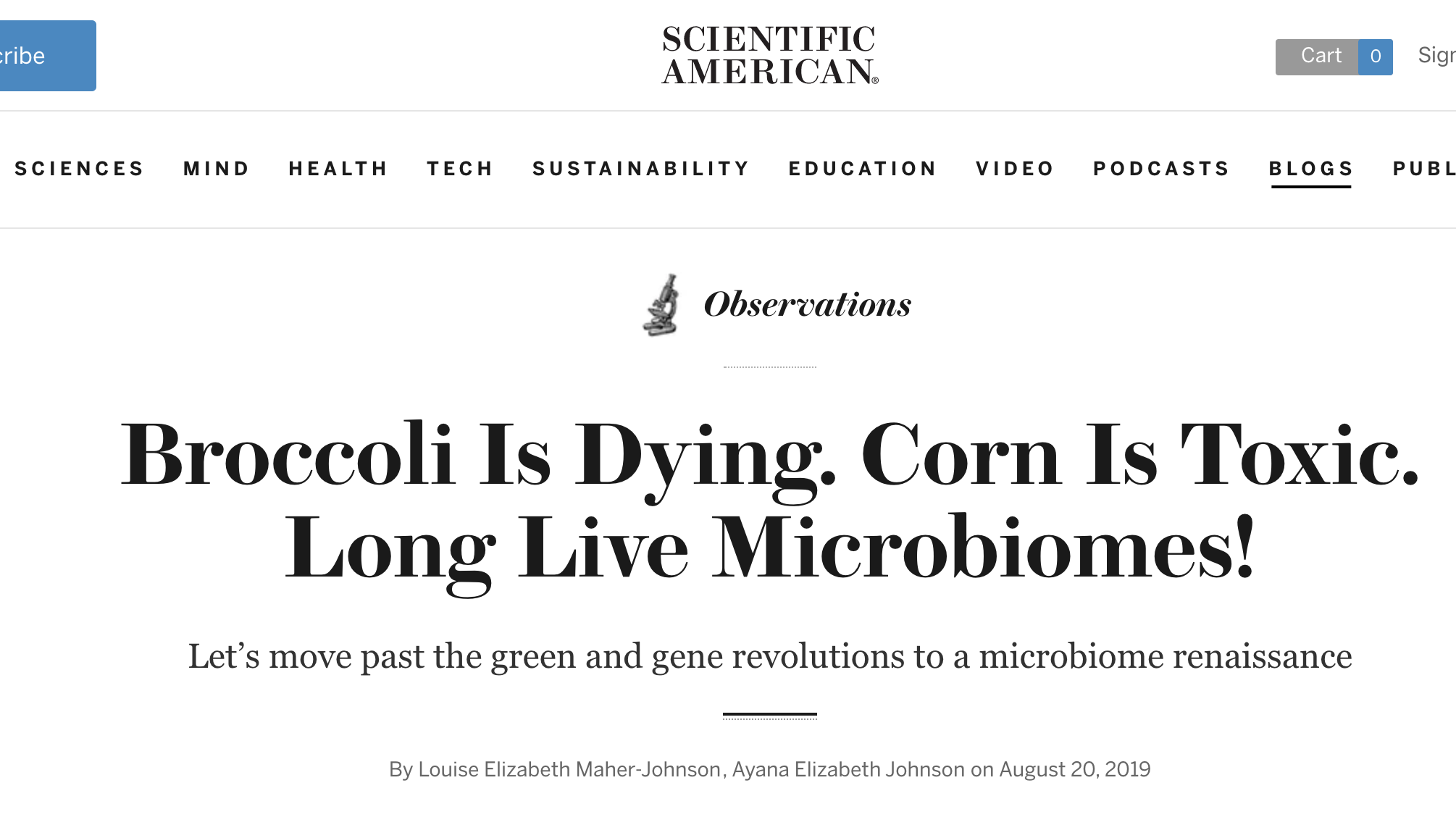 It's hard to recall what has been more hyped than the microbiome, except maybe gibberish about endocrine disruption and epigenetics. Certainly acai berries, chocolate, red wine, vitamin D, gluten-free, they all had their moments in pop culture, but nothing like the microbiome, which took a kernel of scientific truth - we need good bacteria - and turned it into an expensive yogurt business which turned into all kinds of tenuous claims about chemicals and food and effects, psychological and physical, all linked to shamanistic beliefs that a supplement will shape the trillions of bacteria in our bodies.

It's all rubbish but that may be where Scientific American Blogs resides today. Defenders are insisting because it's their blog it has no editorial oversight, and that's fine. I don't control what scientists write here either. But we only let one loon in at a time. If their blog section only has one person writing and it's a loon, that is hurting their brand.

Not all press is good press, it isn't like Activia or some other supplement company is suddenly going to throw millions of dollars in ads at them, and they are in a jam. When they shifted from science to politics as science, they lost a lot of public engagement. They got sold for about a dollar and are now a small cog in a British wheel that is owned by a German family. When you are a group that barely breaks even and part of a large media conglomerate you don't need negative publicity.

And this is negative publicity. Scientific American editors and staff may be comfortably ensconced in New York digs so they may think farmers are dumb rubes, but farmers spend $100,000 on pieces of equipment, and they have multiple monitors displaying real-time land data so they can optimize inputs while watching commodity prices. They know more about science than gardeners who pontificate at Scientific American blogs ever will.
Science 2.0
More Articles All Articles
About