Hank Campbell
Muons are leptons(1), fundamental particles formed in the atmosphere by cosmic rays that are a heavier cousin of electrons. The Standard Model has three generations of leptons; electrons, muons, and tau plus their three neutrinos. The Standard Model is in line with "the big bang" and measurements of the hydrogen/helium ratio - because the number of types of neutrinos affects the prevalence of helium.

Things were great, or at least in a kind of intellectual détente on the Standard Model, until recently.

Muons were discovered when in 1936 Caltech physicists Anderson and Neddermeyer noticed something that curved differently from electrons and other particles in the presence of a magnetic field. From there, theory followed. All good, except the Muon g-2 experiment at Fermilab recently measured the muon “magnetic moment” and it disagrees with theory. By quite a bit, and they have 4.2 sigma (standard deviations) accuracy so it is not settled like the Higgs boson was with 5 sigma but it is compelling enough a group of cranky, argumentative experimental physicists agreed it is real.

Are theoretical physicists wrong? Is the Standard Model of particle physics flawed? Or is this a missing link that will be explained by unknown particles or forces? Does it matter?(2)

A recent paper did a new theoretical calculation of this parameter and that reduced the discrepancy with measurement, but it still has high energy physicists cheering that it may mean something new. Theoretical physicists don't want to be haunted by Feynman's "If it disagrees with experiment, it's wrong" postulate so they are also scrambling for answers.(3)

In a strong magnetic field, as with electrons, the direction of the muon's 'magnet' wobbles in a way that can be compared to a spinning top. This g-factor can be calculated to very high precision, but physicists will be the first to tell you that you can easily get a high-precision and yet wrong answer. That is the downside to convergence. 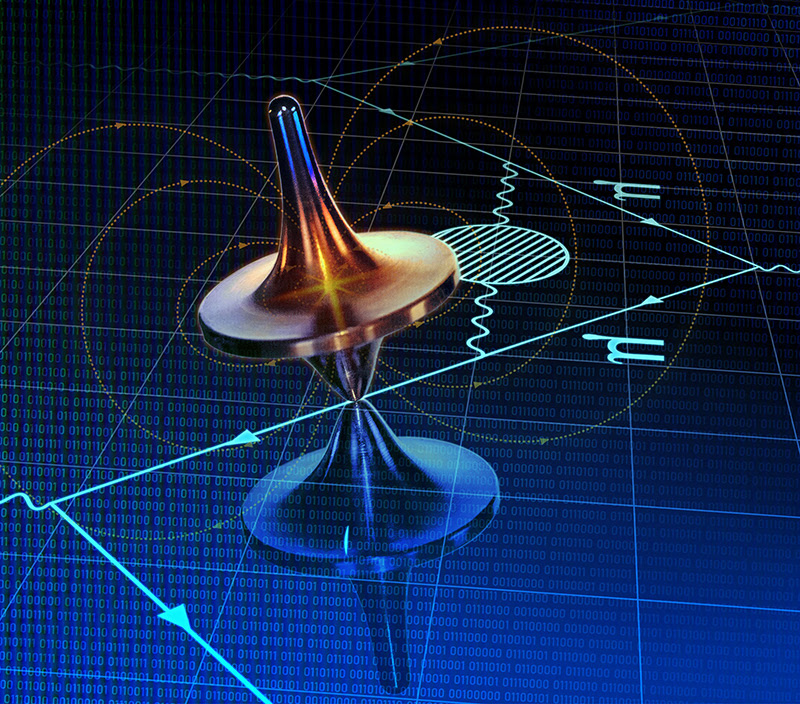 In this graphic, the muon spins like a top in a magnetic field, impacted by the magnet from the Muon g-2 experiment and virtual particles from the quantum vacuum state. As it changes the hadronic vacuum, its magnetic moment changes. The background is just graphical, in this image by Dani Zemba of Pennsylvania State University.

So what's the drama? Short-lived subatomic particles affect the value of the g-factor and the Standard Model accounts for that. Except it doesn't, if the new measurements hold up.(4)

Some physicists say they have been refining the accuracy of the calculations for decades, and those have been calibrated by electron-positron colliders. So measurements may be the anomaly. The public are right to be skeptical because measurements also claimed faster-than-light neutrinos just a few years ago. But it was experimental physicists who fact-checked that, while pop culture theoretical physicists were pitching books about what it might mean for time travel and multiverse mumbo-jumbo.

The new "reference" approach was daunting - a billion variables - but it predicts values for the muon magnetic moment that differ from the measured value by...less.

Hardly an endorsement but this could all be nothing anyway. The difference is 4.2 sigma, so there is a 1 in 40,000 chance that that the wobble is not magnetic, but statistical. More runs at Fermilab and other experiments and, honestly a lot more physicists looking at the methodology will clear it up either way.

(2) It's pretty esoteric to people who just want to live their lives. When I. I. Rabi was told of the discovery of the muon he joked, “Who ordered that?”

(3) String theory believers hope this means they could still be right.

(4) Don't worry, even if you are one of those '5G cell phones will kill us just like radiation from light bulbs does' types. We are made of quarks and muons don't bother interacting with us.
Science 2.0
More Articles All Articles
About