The Golden Globes Did Something Pro-Science, And Anti-Vaxxers Were Enraged
By Hank Campbell | January 7th 2019 11:55 AM | Print | E-mail

Hank Campbell
When I first began writing about the anti-vaccine issue, California was the home of the movement (1). The state had more philosophical exemptions than the rest of the country combined, and they were primarily wealthy white elites living on the coast.

Things have changed in those 12 years. California had to pass a law mandating vaccines for kids, done after I wrote of schools, such as in Marin county, where under 30 percent of children had vaccines, but getting a law passed was a sign that Hollywood had shaken off the Jenny McCarthy, Jim Carrey, Mayim Bialik, Rob Schneider faction (2) and embraced saving the lives of children. Governor Jerry Brown was not doing anything without his largest donors being on board.

And that brings us to the the Golden Globes award ceremony last evening, which had a bizarre, if well-meaning, skit wherein a group of not-a-real-doctor people ran into the audience to give people pretend vaccines. 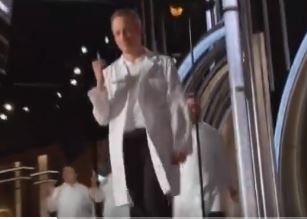 Yes, it was a comedy misfire but that's okay, they were showing that vaccines are important.

This led to hilarious Twitter tropes(3), namely of ouraged anti-vaccine people putting white napkins on their heads in protest.  Here is just one.


I am hoping this catches on. 'Put on your tinfoil hat' is pretty long-in-the-tooth for paranoid conspiracy ridicule these days.

So help out scientists and doctors. The next time someone says something crazy about chemicals, health, energy or food, tell them they forgot to put on their white napkin.

(1) The American home. It began in England when Reverend Edmund Massey called vaccines “diabolical operations” in 1772, just as it found a modern resurgence there in the 1990s courtesy of Andrew Wakefield, who wanted to sell his competitor to existing vaccines. In the early days, and until the 2000s, it was more the province of fringe religious people. But in modern times religious states like Alabama and Mississippi have very high vaccination rates, even with religious exemptions included, whereas progressive states cling to firebrand rhetoric from the 18th century. They do, however, sometimes adopt the "freedom" language of the right wing, as Dr. David Gorski notes on ScienceBlogs.

(3) Obviously, Twitter only really matters if you are selling something. Once a week some anonymous kook retweets their own tweet calling me a Nazi and someone affiliated with the New York University "journalism" department insists I must be a paid shill for Big Science even though this is a non-profit and 100 percent of the money is paid out to writers or maintenance costs. Companies have to cave into this stuff but actual non-profit media does not have to enable such corrosive manipulation of culture.
Science 2.0
More Articles All Articles
About