Hank Campbell
Is it sacred land if it's two and a half miles in the air and only a few elites were allowed to visit on penalty of death for anyone else?

It is, since 2014, according to a few locals mobilized by activists from the mainland who were more interested in blocking science than helping the local community - and have politicized astronomy, in the form of the Thirty Meter Telescope, in their war. To try and bolster their case, and engage in photo ops of government "desecrating" the land they built supposed sacred structures on the site. But they arrived very late and built them illegally. By the time they started saying science would ruin their sacred ground there were 13 observatories and telescopes already there for 40 years, when the Reserve 13,000 feet in the air, above 40 percent of Earth's atmosphere, was set aside for that reason.

In reality, it is great for astronomy and a nice view if you can avoid altitude sickness on the long drive up, but it was never any kind of vital sacred space, any more than Mt. Everest was.

Yet opponents of astronomy had hoped to create imagery of social authoritarian government suppressing their religious beliefs while killing the environment. It hasn't worked because the social authoritarians they hoped to demonize are the Hawaiʻi Department of Land and Natural Resources and the University of Hawaiʻi at Hilo - who have been nothing but kind and respectful to the point they enabled bad behavior. No one believes Hawaiʻi, the most Democratic in the U.S., and a university at the base of the volcano, hate the environment. Nor was anyone believing that California and Canada, participants on the committee, do too. 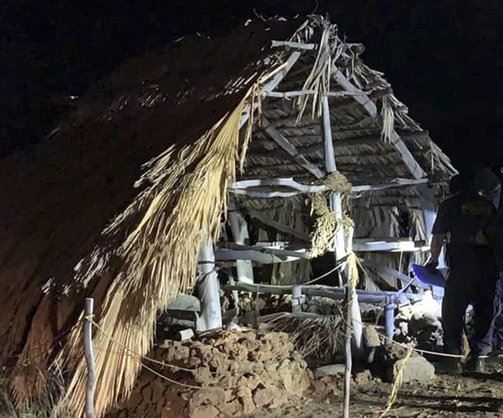 This "religious structure", a simple frame with a frond cover, was hastily thrown together after partisans from the mainland who never left after the 2008 election found a new way to raise money - blocking science 13,000 feet in the air. Photo: Pi'ikea Keawekane-Stafford via AP

The illegal "structures" hastily and illegally thrown together in 2015 didn't convince the state Supreme Court. Nor should they have. Imagine if someone in Manhattan was paid by NRDC to stick a cross on a construction site so they could declare it desecration and discrimination against religion when the city took it down. A similar attempted shakedown was happening at Mauna Kea but they couldn't make it about the environment, since America has the most rigorous environmental practices in the world, so they tried to invoke religion.

What got left out of the native narrative is that what little scientific evidence there is of ceremonial use that high up shows that the same people protesting now would have been put to death if they had even tried to climb above the treeline back then. Not many went anyway. Natives back then were likely too intelligent to go without cars. It takes two hours to go up it with cars, which means the trip is 1 MPH. It's a much tougher walk.

Hilo, which stands to benefit the most from this new influx of science, is among the poorest towns in Hawaiʻi. Obviously they will not be turned into scientists overnight but it's simple economics to know that when hundreds of millions of dollars in construction is injected into a region, along with a whole bunch of smart, diverse people, the economy and culture booms far more than when there is reliance on fickle tourism.

Why do environmentalists not want high-paying, white collar jobs in a science program that will require mitigation of pollution?  It is exactly what they should be fighting for but instead they became obstructionist about astronomy just like groups have in energy, biology, and vaccines. The uncomfortable truth anyone over the age of 30 learns is that at the executive decision level, most environmentalists need to find ways to stay in business.  They can't raise $2 billion a year by being positive about the modern world.

So they attack and undermine.

They likely regarded Hawaiʻi as an easy win because it is so heavily Democratic, and therefore signals more respect for environmentalism. They also won these fights in the past, when the public were less jaded by hysteria: environmentalists effectively drove new astronomy out of the mainland when they successfully manufactured squirrel hype at Mt. Graham.

There was no real concern among the public when the TMT was approved by the state in 2009 because 13 other telescopes and observatories were already there, and the ecological protection was terrific. Having astronomy meant outside funding to improve the area without industry and India, China, and Japan were footing the bill - because it is among the best spots in the world for seeing deep into the ancient universe. The state liked it because Hawaiʻians get the benefits of multicultural, educated people whose income will fund improvements in all areas.

In 2015, students in Hawaiian Studies at the local university, encouraged by their teacher, staged a short walkout to protest in the rain. Then a few shacks appeared, claiming religious significance.

Courts saw through the veneer. They realized the outside activists promoting dissent had never heard of Hilo or could have found Mauna Kea on a map before they were paid to cause protests.

Though this will get built, Hawaiʻi loses

Still, though the courts have sided with science and policymakers the activists won. After 10 years of manufactured controversy, even the University of Hawaiʻi has given up on Hawaiʻi. The entire world has agreed the Thirty Meter telescope will be the last astronomy program in the state.

It's a loss for science, and a loss for Hawaiʻi, but a big win for South America, where they recognize the direct and indirect benefits to culture and economics when science comes to town. Unless government lets environmental fifth columnists undermine science there also.
Science 2.0
More Articles All Articles
About