Hank Campbell
Ask some, and certainly companies selling remedies, and they will tell you there is so much depression during holidays that suicides rise noticeably.

If someone believes it, a producer or editor in corporate media will want to publish it, and therefore more people hear about it, and that is why many believe that suicide rates rise during the year-end holiday season. It isn't true, any more than there is more strange behavior in emergency rooms during full moons, but some will swear by their anecdotes.

The Annenberg Public Policy Center (APPC) of the University of Pennsylvania analyzed media data of news coverage during the holidays from 1999 on and found that last year what politically experts generally predicted did happen; lockdowns and concern over COVID-19 reversed the decline in suicides.

Yet the average daily suicide rate during the holiday months was actually among the lower periods. So why do half of journalism stories claim that suicides go up during Thanksgiving and Christmas? 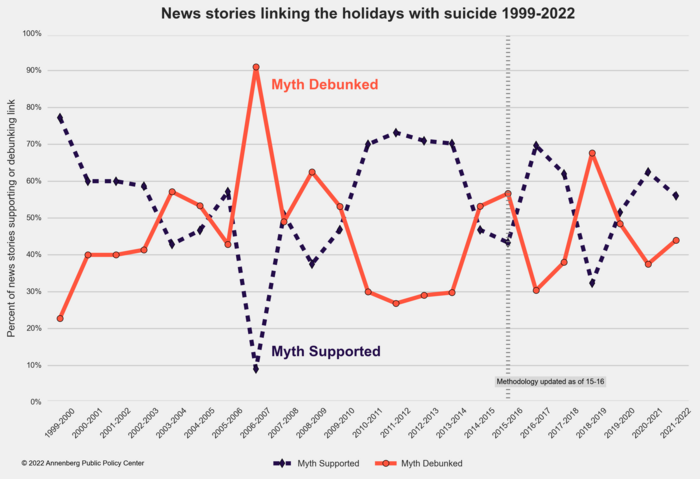 Half of corporate journalism stories(1) that discussed holidays and the suicide rate supported the myth that holidays meant more suicides. Little wonder that public trust in journalism is down near that of Congress and lawyers; people know it is often about selling advertising, which means getting viewers, not telling the truth.

***
Obviously you can light a candle rather than curse their darkness, by donating here. All of your donation goes to programs, no salaries or offices.

Why this myth matters

For 16 years we debunked anti-vaccine myths, like that the MMR one caused autism and that a 'chemical cocktail' was bad for the human immune system. Yet journalists working at outlets which overwhelmingly catered to the political demographic that held those beliefs dismissed it as harmless. Yet it was not harmless, children died, and finally after nearly a decade of work we got the home of the anti-vaccine movement, California, to put an end to their arbitrary vaccine exemption, and now the state is up near places like Alabama and Mississippi in essential vaccines for kids.

Only when Republicans disliked mandatory COVID-19 vaccines or being fired from jobs did more journalists cover the perils of the anti-vaccine movement. Covering issues only when it deviates from the political beliefs of journalists, editors, and the advertisers selling to those attracted to political skew is exactly what trusted guides for the public should not do.

Yet it is an agreeable just-so story for journalists, who can lament over-commercialization of the holidays, debt, toxic family situations, and unrealistic scenarios in Hallmark movies and claim people are killing themselves in droves, without using the sensible refutations of the myth provided by the CDC, the Suicide Prevention Resource Center, and the National Institute of Mental Health, media scare people and perhaps create copycats if instances are magnified.

There is no question government lockdowns and brutal psychological bullying of anyone who had doubts about heavy-handed approaches to limiting COVID-19 risk led to nearly half of young people showing anxiety or depressive disorders but blaming the results on holidays, rather than journalists and cultural mullahs on Twitter, is ridiculous.

Like all health myths, from endocrine disruption due to BPA and PM2.5 causing your child to have lower grades, it will not go away this year, but we persevered to get California on the vaccine train, and they went from having more unvaccinated kids than the rest of the US combined to being near the top in acceptance, and we can do the same for mental health - if the half of journalists promoting myths will get on board.

(1) Methodology: Search terms like “suicide” or “suicides” with variations of the words “holiday,” “Christmas,” “New Years,” “increase,” “peak,” and “rise,” from November 15, 2021, through January 31, 2022 using the LexisNexis database and NewsBank.
Science 2.0
More Articles All Articles
About