Hank Campbell
It's not often that a guy who can't order lunch in under a thousand words can be stumped for what to say, but when it comes to "Automatic Reload" by Ferrett Steinmetz, I am at a loss. Mostly because all of the good one-liners were taken by others before I got my galley.

The best cyborg meet-cute you'll read this year? I can't use that, Corey White did. A cyberpunk rom-com? Yes it is, but I'd be cheating if I say it.

The end is: You know how movie studios are releasing films to streaming early to keep people out of theaters? Tor should do that with this book. Because most Netflix shows are actually crap and when this comes out May 26th, everyone will be back in theaters and bars, and right now they could be reading this book. And if they pick up this book they will stay inside and finish it. That's a public health win. So here you go with a link to Amazon Smile, which means if you choose our non-profit we get a penny or something: 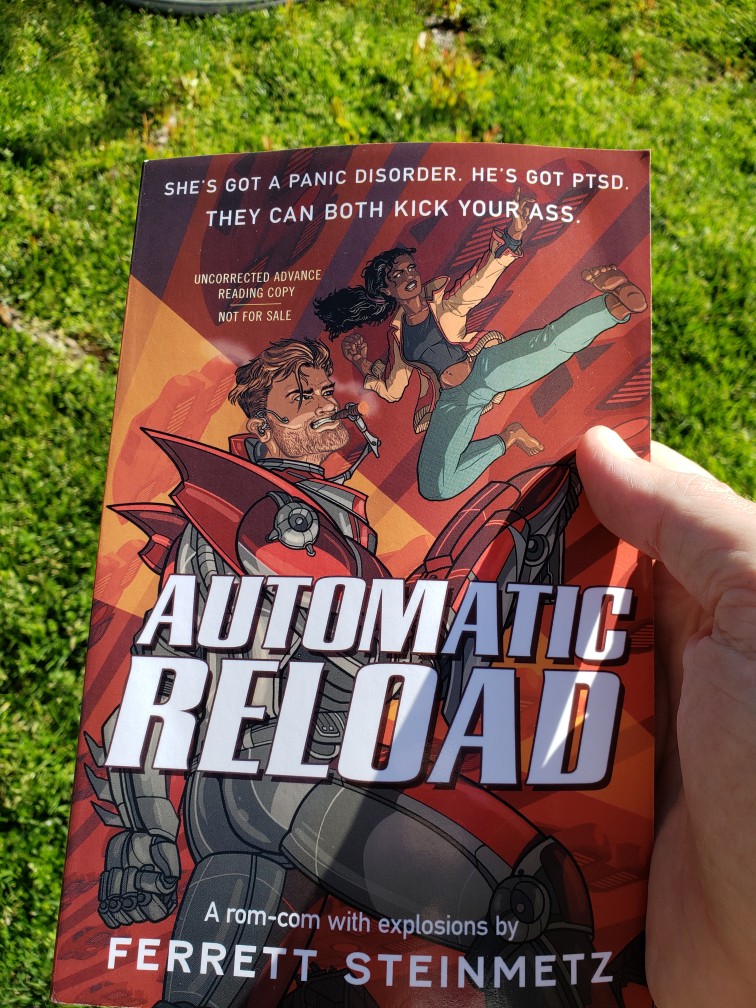 But maybe the power of that statement is lost if I don't start at the beginning.

The beginning is "Nine Princes In Amber" by Roger Zelazny ... wait, that's too far back. The beginning you care about is a hulking multi-million dollar biohacked killing machine who seems to inhale cigars, something I've only seen Korean application engineers do without vomiting. He suffers from PTSD and the last thing he needs is to get tangled up in a conspiracy weaved together by an omniscient worldwide enemy.

Hilarity ensues, right? Kinda, yeah. If you find committing felonies while on the run from not only the world's most dangerous shadow organization but also their enemy funny. And then there is the mental health stuff, which ends up being really compassionate, even educational, about panic disorders without being preachy, because dysfunctional coping techniques are part of the plot.

He regrets what he gets himself into and it's going to get worse once he handcuffs himself to a gorilla-strong woman with panic disorder, I can tell you that without giving away anything major.

"I'm sorry? Is war won on style points?"
I am not used to civilians correcting me on military tactics.

My only quibble was on page 75 where our author opines about their present state of one field of science, so let's assume our future, which I found dubious, but then on page 88 I learned even that was a set-up. I won't spoil that part of the plot either, but I had to appreciate that he fooled me into doubting him for 13 pages.

"No, no, you definitely should have punched him. Of all the people, he's the guy to punch."

There is punching, and guns, and explosions, and movie quotes, and comedy, and more guns. You can't go wrong. I even loved the Howard Chaykin-ish cover by Paul Sizer.

It's not perfect. It lacks a gay pride rainbow-colored Transformer shooting hearts out of its turrets, but if you can live without that, you should preorder this book.

And Tor, seriously, roll it out early and your sales team will be cackling like Scrooge McDuck on his mountain of gold. There is no risk and a lot of upside. I found three typos in the whole thing. No one is going to care but I'll send them to you if it helps.