Hank Campbell
Tracey Woodruff, PhD, MPH, of the University of California San Francisco, frequent collaborator of anti-vaccine activist and organic industry trade group head Gary Ruskin (US Right to Know) and sue-and-settle attorney Raphael Metzger, is back with a new paper claiming they can 'detect' chemicals in pregnant women.

Well, we can detect anything in anything by now so that is no surprise. It is only "proof of concept" that technology has improved so whereas parts per million used to be 'zero' now it is parts per quadrillion. It would be more of a surprise if I couldn't detect a proton of something somewhere. I write that she is "back" because this paper seemingly gets rewritten every year, and your tax dollars are paying for it.

To science literate people, chemicals are everywhere - including chemicals linked to cancer in rats - we have only just recently been able to 'detect anything in anything' and set off a chemophobia craze that finally ended with the COVID-19 pandemic. People are stocked up on chemicals like Purell, Lysol, and Clorox. Science is cool again, and that has activists in a panic.

No one is believing that a trace chemical in french fries really causes cancer today(1), no one believes much of the 'all science is evil' narrative at all now. Yet if that is how you raise money, you have to keep saying it.

Professor Woodruff has no medical experience of any kind, leaving it a mystery why UCSF would name someone with no credentials a Professor in their OB/GYN department. It's even more of a mystery why Professor Woodruff writes basically the same paper every year. This year the press release headline is that they found "evidence of 55 new chemicals in people" whereas in 2018, for example, it was 56.

“As we suspected, more chemicals are present in pregnant women than previously identified, some of which may be hazardous to the developing fetus and to adults,” Professor Woodruff stated then.

Let's examine that. What does "present" mean to anti-science activists? In this case it means being able to detect one ionizable proton using high-resolution mass spectrometry. You read that right, if they can detect one proton, which requires a $35,000 machine, this group will declare it "may be hazardous" - activists love modals like "may" because it gives them room to slither back out of it when biologists, toxicologists, and chemists note it is nonsense.

Activists don't need real science to "suggest" risk, they only need statistics. Epidemiologists claimed in all seriousness that the election of President Trump caused Latina women to go into pre-term labor, and it got a lot of media attention because if fit the partisan 'he hates foreigners' narratives, but a look at the data showed it was really only 0.00007 more.  That's statistical noise that a non-partisan epidemiologist would dismiss.

If you flip a coin, what is your risk of getting tails? 50 percent, right? Now imagine you wanted to do a science study of coin flips to show that President Trump's election causes more coins to flip tails.

All you have to do is create 10 columns of coin flips and 61 rows. Is there a risk you will have tails on the coin occur 5 times in a row? More than a risk, it's almost guaranteed. Not only is it bordering on certainty, you can probably find it happening in 7 out of the 10 columns, which means you can declare with "statistical significance" that coin flips during the Trump presidency were prejudiced against landing on heads.(2)

A good epidemiologist will laugh at that and note that unless the tails are all happening 5 in a row in the same place in each column, that isn't valid. Which is exactly the point. A good epidemiologist won't make that claim, but shoddy ones who have an agenda that does not involve informing the public do it all of the time.

This leads to Professor Woodruff's queasy relationship with the Metzger Law Group. Metzger is famous in California for exploiting the state's Proposition 65 law to shake down companies. Proposition 65 was a voter referendum that handed off science to foreign bodies like France's statistical group, the International Agency for Research on Cancer (IARC) and others. If any group on the list found a "risk" of cancer, by law California companies have to place cancer warning labels on them. Today, IARC has declared that over 900 chemicals increase "risk" of cancer and California stores are littered with cancer warning labels. Walmart even has a blanket cancer warning just for entering the building. 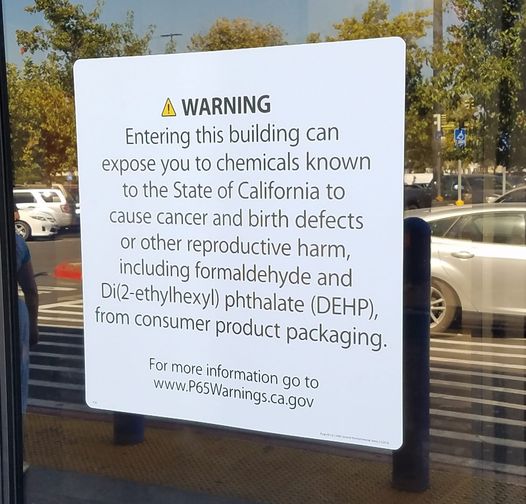 In California, they have a blanket warning buildings like Walmart that a chemical 'has been linked' to cancer, even if it was only in rats or using data dredging of statistics. Then there are hundreds of individual warnings inside. Cancer prevented: 0. Rich lawyers: thousands. Credit: Hank Campbell

The problem with conflating hazard and risk the way IARC and California politicians do is that it has nothing to do with the real world. IARC and shoddy epidemiologists ignore dose because they only want to call something a hazard - even compounds that IARC working group members sign contracts with lawyers to testify against in advance. If you only care about calling something a hazard, it does not matter if it's 1 dose or 10,000. If they can detect a drop of a chemical in 160 Olympic-sized swimming pools, and that chemical can cause disease at high doses, they will say your risk has gone up. Then Nick Kristoff will babble about it in the New York Times the way he claims sperm counts are caused by exercising too little - and too much. And television.

COVID-19 has put the chemophobia industry into a tailspin

Yet there is now hope that's changing. The COVID-19 pandemic caused coastal elites in places like San Francisco to flip from being anti-science to appreciating the modern world again. Pictures from store shelves last year revealed overpriced "green" bottles of barely-working stuff everywhere in stock while Purell, Lysol, and Clorox couldn't be found. Wealthy progressives who dominated the anti-vaccine scene - in California we had to pass a law to stop them from harming their children by denying them medicine - are now buying their way to the fronts of lines for their cherubs and themselves.

People appreciate science and medicine again and have turned their back on placebos like the "Peruvian tree bark" and light pills CNN journalist Chris Cuomo and his wife were foisting off on the gullible. Meanwhile, Professor Woodruff and her fellow deniers for hire are busy ranting about trace chemicals and 5G cell phones. The public now know that this stuff is just a money grab. 5G is no more harmful than a light bulb no matter what Woodruff's "Industry Docs" project at UCSF tries to claim about all progress being a corporate conspiracy. And that means even the most staunch science denier about chemicals will soon become as literate as 16th century peasants and realize that just because we can detect something in parts per quadrillion does not make it harmful.

(1) Acrylamide, for example, was only first discovered in food in 2002 but since obscene doses can cause cancer in rats, Metzger sued over it. McDonald's and Burger King settled, of course, because their attorneys know science is irrelevant until a case gets to the appeals process and a San Francisco jury might have awarded $100,000,000,000. Yet to activists a settlement is "proof" of harm.

Except there is no harm and never has been. In his Third Defense, Paracelsus noted that for any chemical there is what we now call a no-adverse effect level (NOAEL): “All substances are poisons. There is none which is not a poison. The right dose differentiates a poison and a remedy" which became colloquialized as 'the dose makes the poison.' The least educated person for hundreds of years was able to grasp it. And then along came environmental activists, who instead insist that 'the presence of any pathogen leads to pathology' and try to science up their mysticism with pseudoscience terms like "bioaccumulation."

Acrylamide scaremongering failed because humans cooked food for tens of thousands of years before it was even known to be in it. That a french fry is causing cancer because the potato is cooked is slightly less ridiculous than that the french fry container is causing cancer, which Professor Woodruff has also claimed using the same junk methodology in this new paper. Not to mention the chemicals that have saved lives by preventing explosions in houses during fires, she statistically suggests those cause dumb children.

(2) Just find enough "clusters" of heads or tails to claim statistical significance. Harvard made this technique popular in the 1980s when they did it with Food Frequency Questionnaires.

61 rows, coin flips here but for Harvard School of Public Health they were foods, and 10 columns, which to them were health effects. Using a coin flip random generator, if seven times out of 10 you get runs of five tails in a row, you can claim that coin flips are not random with statistical significance.