Hank Campbell
When Daniel Craig was announced as the new James Bond, he took a lot of criticism. I will be honest, I was among the critics. I have read every book, seen all the films, I wear both Charvet and Turnbull  &  Asser shirts for no other reason than they were in the books (the French brand for villains, naturally, and then Turnbull for the man himself) and I was firmly on Team Clive Owen for the role.

Craig was clearly a Sean Connery and not a Roger Moore, who was most like the Eton-schooled Bond in the books. He was too short but author Ian Fleming was creating an idealized version of himself, much like Dan Brown fictionalized himself as an Indiana Jones for art history majors, yet I conceded there is no reason all spies had to be 6 feet and up.

I was kind compared to a lot of others. Craig was criticized for his hair color and his eye color, he was criticized because someone told him to wear a life preserver in the boat coming up the Thames to officially announce him and he did.


That sort of clueless timidity was ridiculed adroitly in a very underrated movie; "The A Team."

Yet his biggest cultural sin was chewing gum during the press conference. He got berated for that along with everything else. It looked coarse, low class, vulgar, some claimed. This was an odd take on a character who literally once had his own chewing gum. 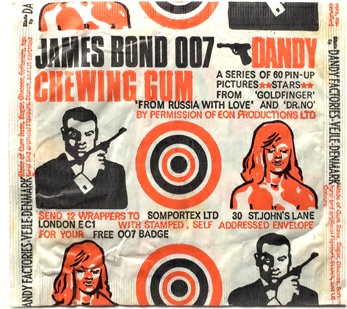 One of his American successors, Ethan Hunt of the "Mission: Impossible" films, even used chewing gum as a Bond-like gadget in 1996.

15 years after all of the criticism and Craig is the best James Bond ever. He had two great films and, being an old guy with an opinion I'd argue that is better than his predecessors, who each had one.(1) No one cares about his height or his hair now and we don't think he's afraid of water.

What about the chewing gum? He was clearly nervous in that press conference.(2) Those nerves, and the impostor syndrome most of us likely face in daunting situations, are why he chewed it.
But he may have been correct. Nervousness often causes a dry mouth and gum helps produce saliva. Jerry Darsch, director of the Defense Department’s combat feeding program once said gum had been included in military rations for nearly a century for two reasons; you can't communicate if you have a dry mouth, and chewing gum calms nerves. It is basically like a fidget spinner for your teeth.

Great Britain's Health and Safety Executive, found that “in 2019/2020 work-related stress, depression or anxiety accounted for 51% of all work-related ill health and 55% of all days lost due to work-related ill health.” Different people have different ways to relieve stress. Getting me to try and meditate is a waste of time, but TaeKwon Do or chewing gum? Those I can do. A study a few years ago reported that people who chew gum report lower levels of stress.

Do we want to advocate more psychiatric medication or more ways for people to calm down without pills? I know what I prefer.

Craig may have been out of fashion chewing gum to calm his nerves, but he was not out of his mind.

(1) "Casino Royale" and "Skyfall." "Dr. No", "The Spy Who Loved Me" and "Goldeneye" are the good movies for Connery, Moore, and Brosnan respectively. As postmodernism afflicts everything, it is fashionable for young people to contradict prior generations, so "On Her Majesty's Secret Service" is enjoying a renaissance but they can't be taken seriously.