Hank Campbell
When I was a young guy living in Florida, on one station we used to get reruns of a television show called "The Saint". I liked the stick figure cartoon and the halo that would appear above his head in the beginning. Roger Moore was cool.

He became the third actor to play Ian Fleming's British super spy James Bond (and the longest-running) and was the perfect choice. Yet most people remember the 'cartoon-y' James Bond films that came on his watch. He is unfairly derided as the worst James Bond now, and that is saying something in a roster that includes George Lazenby and Timothy Dalton.  "The Spy Who Loved Me " holds up pretty well, the recurring actors all have at least one good movie.

In the 1980s Pierce Brosnan was a private detective on a show called "Remington Steele". The hook of that show was that a female PI was the brains behind the agency but she knew some people did not like dealing with a female PI, so she created a boss who was a man and she worked for him. One day, a man shows up and he is Remington Steele and jumps right in helping. She can't out him or her company is regarded as unethical. Hilarities, mystery and eventually romance ensue.  By then, Roger Moore was a bit old to be Bond and Brosnan was perfect to replace him but could not get out of his contract. (1)

In 1995, Brosnan finally got his chance. Since the movies had exhausted the books, "GoldenEye" was written from scratch and it gave us a Bond equivalent to Sean Connery's, and it also gave us a modern 'Bond girl' equivalent of the woman who created the archetype of the Bond Girl, Ursula Andress (2), in Famke Janssen. Like Bond itself and the movies he was in, the women of Bond had a lot of variation in quality.(3) You can find innumerable lists of 'hot' Bond girls, but it's not easy finding good ones.  And I want to rehabilitate the reputation of one of the most reviled, the scientist Dr. Christmas Jones.

Since Worst Bond Girl lists are subjective, a barroom argument can break out over Tanya Roberts or Britt Ekland - being in bad movies really helps bad Bond girls get derided - but almost everyone can agree on Denise Richards as Dr. Christmas Jones (4) as the worst, even "Entertainment Weekly" jumped on that bandwagon in 2008.  She wore shorts and a tank top in 1999's "The World Is Not Enough" and that sealed her doom though, in truth, the movie was not all that good either. (5) 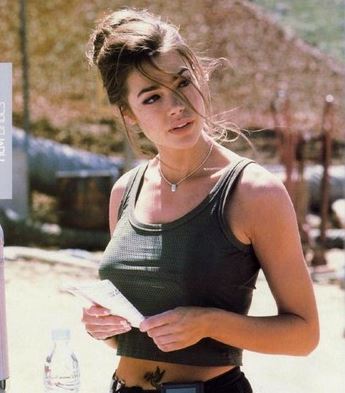 Her casting made sense. "Wild Things" had been something of a controversial (sex) hit and Michelle Yeoh's ultra-competent Bond girl take in the previous hadn't resulted in on-screen chemistry. But Yeoh hadn't been playing a scientist, either.

Our scientists have to have a certain...look...or we dismiss them.

But it's time for a rethink of Dr. Christmas Jones. The character is a brainy, athletic, serious person in the former USSR to help dismantle nuclear weapons. This is not Britt Ekland running around in a bikini and somehow being afraid of that "da plane, boss, da plane" guy from Fantasy Island. The 1990s were an era where "Tomb Raider" and its competent heroine were the rage. While archaeologists were quick to note that most of their peers do not look like Lara Croft, no one was saying Lara Croft is a bad role model for women in archeology despite the fact that she wore the same outfit as Dr. Jones.

Richards is no dummy, she knew why she was hired and she knew how a Bond girl was supposed to look. But she also knows how scientists are supposed to look. And this was not it. Having the friggin' "Gorillas in the Mist" guy directing her was not going to help. - and directors matter.  If I pick one movie and tell you to guess how good an actress Natalie Portman is, and that movie is "Star Wars Episode I", she is going to make a lot of 'worst of' lists despite the fact that she was terrific in plenty of things before or since.

Her character really bugged me a lot at the time, you can see why in the clips above, but she bugged me nowhere near as much as Teri Hatcher did in the movie before this, and yet Teri Hatcher does not make 'worst of' lists.  But Hatcher was just the wife of...wait for it...a media mogul who wanted to start a war with China to get exclusive coverage for his network.  We go easier on fictional network wives than we do scientists.

So let's forget Denise Richards and focus on the character, Dr. Jones. I think she deserves a rethink.

In 1999, women had been outpacing men in PhDs for a decade but then, like now, they were being force-fed a diet of stereotype threat and gender bias by social scientists who happened to be mostly women.  Men still had the bulk of top positions in science academia, so sociologists who needed to insist the fix was in against women showed some motivated reasoning.

In popular culture, women were increasingly strong role models too.  Bond's boss had been a woman since 1995. The strong and attractive female role model was a suddenly a "pro-sex feminist insurgency that swept the puritanical old guard into the dustbin of history," wrote Camille Paglia, so why was an attractive scientist character derided in a James Bond film? Critics didn't just pan the movie - and it was like most James Bond films a lot of one liners and innuendo and silliness - they said the whole character was bad.

Women striving to do good science in 1999 probably did not want to have the pressure of looking like a Bond girl. But it's a James Bond film, it is not teaching teenagers to expect female scientists to look like Denise Richards any more than they expect to get invisible cars from their friends. And I may be mistaken, but I don't think Jodie Foster was accepting any supporting roles in Bond films around that time so the choices were either (a) have no female scientist or (b) make the female scientist a frumpy stereotype or (c) make her an empowered role model that was portrayed by someone not entirely comfortable with the role and with a rather stilted script.

I think you go with (c), just like they did. Today, it is easy to dismiss Jones.  But the dismissal is being done by the same people who blasted a science-outreach-for-girls video because the girls were cool and pretty and having fun - things have gone so far the other way they are worried too many cool girls will go into science.  These people insist science be portrayed as boring and bland and then we'll have to spend $5 billion on outreach to convince girls to go into science all over again.

It's 2012, even for militant people who insist only their version of female scientists is acceptable. Some scientists will be men, some will be women, some will be ugly, tall or fat and some will even be both cheerleaders and scientists.  But movies are escapism, they are not shaping the culture.  "Prometheus" was hailed by Slate writer Alyssa Rosenberg for its positive image of women in science but you know who was insulted by that movie?  Every single biologist on the planet, if they took it at the same face value as Rosenberg takes Christmas Jones. She also hails Dejah Thoris in "John Carter" as some new wave of scientifically believable women.  Basically, she may only like female scientists in movies that suck.

In its countdown to Skyfall or (whatever that blatant puff piece on the new James Bond film was) feature yesterday, Richards spoke well of the experience and of Brosnan to USA Today.  Well, why shouldn't she?  She lived with Charlie Sheen, everything else in life has to look pretty good by comparison. Hopefully the history of science treats her character as kindly as she treats her past.

Is Christmas Jones the worst scientist in movies?  I have one worse (6) but what is your pick? That Daniel Craig is the best James Bond ever - and even better than the Clive Owen I was rooting for - well, I will brook no argument on that.

(1) You needn't bother renting these, they don't hold up very well. The black-and-white Saints still do okay but Remington Steele is very much a 1980s show. While it came on a year after "Hill Street Blues" network executives had not figured out that a large chunk of the TV audience wanted something more complex.

(3) Two dramatically different, great Bond women, though Andress gets dismissed by some today.  If I am trapped on an island and want someone who can help me find food, Honey Ryder would be a better choice than 99% of scientists:


(4) Harkening back to "The Saint" again, this time the movie, she was the most ridiculously worst casting since Elisabeth Shue.

(5) Bond movies have their spots and then seem to fall off.  Outside hard-core James Bond fans, if you ask who is the best Bond, people will say Sean Connery. Yet if you watch his movies, most of them are pretty terrible.  In reality, Connery did one good one, maybe two for die-hards, Moore the same, Dalton did one, and it primarily looked good because it came after the last Moore film and Brosnan did one. So far Daniel Craig has also done one good movie, despite his being the best James Bond ever.

His director for the third installment, Sam Mendes, is the guy behind "American Beauty", which is among the worst Academy Award-winning movies of all time.  Things don't look good for Craig breaking the curse.

(6) I already mentioned Elisabeth Shue but she was not the worst. Tara Reid as an anthropologist in the world in "Alone In The Dark" was the worst, though that gets us into 'is anthropology science?' rants.
Science 2.0
More Articles All Articles
About