Hank Campbell
In December, people begin to think about the new year, and that means resolutions to lose weight. Exercising is a lot of work and feeling hungry much of the time is not desirable so many will instead opt for diet plans. One popular diet is the Atkin's Diet, where natural sugars are replaced with protein, while another is the Ketogenic Diet, where sugars are replaced with fatty foods. Both seek to put your body into a metabolic state called ketosis, where elevated level of ketone bodies replace glucose.

Both proceed from biological fact but just like expensive biking suits with the same sponsors as popular riders, or Kinesiology Tape appearing on middle aged men in local gyms because football players wear them, they become popular because a whole lot of people engage in totems of elite fitness experts but not the work ethic.

Unless you are engaging in strength training to build more lean muscle mass or on a caloric restriction diet to lose weight, more protein isn't helping you, according to a new study. 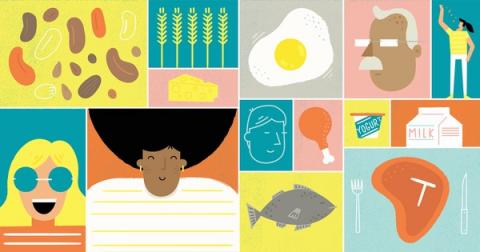 America is far wealthier than it was in the past so most Americans already consume enough protein. Adding to that isn't a weight loss regimen, with quality food at affordable prices Americans consume more calories than in the past of all calorie types. This has led to a surge in diet fads, from claiming wheat is the problem to corn syrup to trans fats in pie crust rather than pies and BPA lining in cans.

To get better answers than fad claims (and the epidemiologists and book authors who rush to take advantage of them) the authors of the new paper identified 18 studies consisting of 22 intervention groups and 981 participants. Inclusion was based on healthy adults, physical activity and other real world circumstances. The sources of protein the participants used ranged from meat to legumes so that is a confounder for anyone that wants to make specific choices about protein types.

Dumping carbohydrates and opting for high fat or protein isn't necessarily a good idea. Unless the calories have dropped too, it doesn't help. If the calories drop, you don't even need to swap out any energy source for another. It has good 'shock' value for the body, the way any crash diet does, but it is not a long-term lifestyle.

However, if you are engaged in strength training, to produce more muscle mass (which burns more calories than fat but is heavier, making weight a deceptive metric) you should cut back on more fat and carbohydrates and ramp up the protein, while still consuming fewer calories. At least until your muscle mass catches up.