Hank Campbell
If you want to annoy someone in their late 30s, joke that all they care about are avocado toast points or beard grooming or running off to Coachella when a project needs to be finished. Because they are millennials.

You can also stereotype Baby Boomers or Generation X(1) and get a rise out of them. Everyone seems to know that these "generation" classifications were entirely manufactured by advertisers, but they caught on and have become part of the lexicon. Advertisers created these sweeping generalizations based on demographics.

Yet they may not be right at all. They may even be shockingly wrong.

Though demographics lead us to believe these groups must have a lot in common, 100,000 people surveyed show that when it comes to nearly 400 issues, they don't. Maybe 10% agree on all of the things demographers pick and choose as representative, like avocados. If you think modern epidemiology is suspect because lots of rows and columns with foods and diseases means anything can cause or cure cancer with p>.05 statistical significance(2), you really won't think much of demographic research. And yet it's used by a giant chunk of a $1 trillion industry. 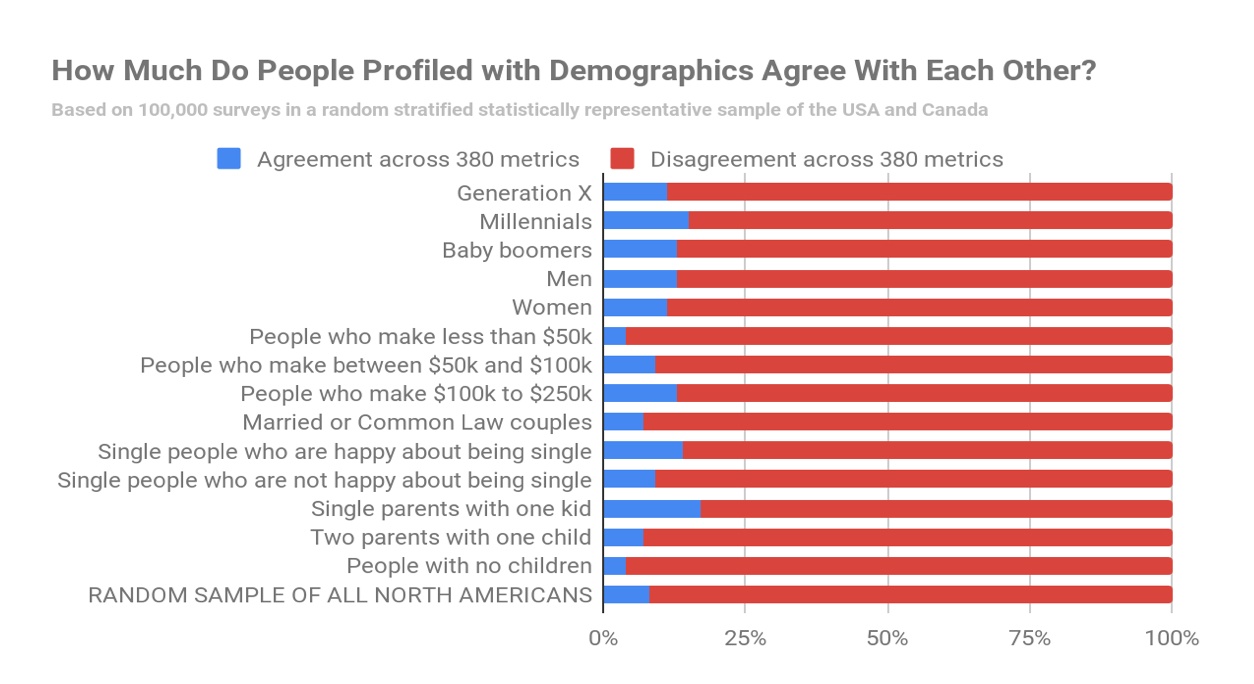 Poor people and those with no children are all over the map when it comes to issues but even millennials are only 15 percent similar despite being told their whole lives they are easy to compartmentalize.

No wonder advertising is simultaneously credited with every problem ("ultra-processed food") and yet every benefit (publicizing the harms of smoking).

Perhaps they do deserve the credit. Is a low percentage really that low when it comes to public impact? Other sociological analyses have declared an issue reaches a tipping point long before the majority have adopted it. Around 10 percent. And it takes time and persistence to get there. So although the first U.S. gay rights organization was founded in 1924, it was only in 1972 that George McGovern became the first presidential candidate to support equal rights for gay people (the Libertarian party, founded a year earlier, had already done so) and TV didn't get its first (openly) gay character until 1977.(3)

Advertisers may have been right in broad spectrum ads over time for that reason. But demographic advertising remains the least optimal way to spend money if so many agree on so little today. That is why the somewhat clunky targeted ads are the future. Right now, they are sort of ridiculous; if you buy batteries on Amazon and go to Facebook you will get a lot of ads for batteries you already bought, but using network theory - we should be able to determine 90 percent of the pertinent information about an individual's preferences even if they are not on social media because their friends are on social media - should mean a way to anticipate what you might want to buy. Do your friends buy rechargeable batteries? Maybe you would like some too. Did you friends on Facebook buy a generator? Even if you are not on Facebook at all you might need a generator also, because clearly a storm happened that knocked the power out and people love to solve problems after they occur.

Like population level claims about health (BMI, sugar and salt guidelines, etc.) attaching demographic results to individuals has been even less relevant to the real outcomes than Harvard School of Public Health epidemiology papers. We learn at a young age that broad stereotypes lead to errors even while recognizing they spun out of control from a kernel of data. It's time to keep that in mind when we believe that we know how younger people are going to turn out.

After all, throughout American history we have seen adults with knowledge of broad demographics insisting they knew all children would go awry:

Obviously it was young people who won the Civil War in 1865, and young people in 1939 went on to clobber the Axis in World War II.  But if we had listened to demographers we would have surrendered.

"Kids these days" will  end up surprising us as well. We just have to ignore ridiculous claims by marketing groups and let them become who they are meant to be.

NOTES:
(1) And they have changed. A generation used to be 20 years whereas the Baby Boom was an event; births that happened when soldiers returned from war and a whole lot of babies resulted starting in 1946. Then it became a whole generation somehow. When I was young, Baby Boomers were those born until 1966, 20 years, then marketers decreed a generation was a much more awkward 18 years rather than 20 so being born in 1965 I was suddenly Generation X. Weirdly, Billy Idol. who was actually in the band Generation X, was born in 1955, making him a Boomer. Except when he was born the Baby Boom had been an event, so he was not part of the Baby Boomer generation until after he left Generation X for a solo career.

Like horoscopes (in America I am a Virgo, had I been born in India I would be a Leo) these generational terms are either relevant or irrelevant based on whether or not you want them to be.

In the case of WebMD, however...

(3) None of that was without drama. Maryland, the most heavily Democratic state in the continental U.S., became the first to ban gay marriage, in 1972, a few months after McGovern supported equal rights and was criticized by his party for doing so.
Science 2.0
More Articles All Articles
About