Hank Campbell
Some people would not or said they could not socially distance effectively during the early days of the COVID-19 pandemic, the 2019 coronavirus mutation that originated in Wuhan, China and spread worldwide. Is there scientific truth to why?

A new paper's results suggest that 'naming and shaming' and social media videos are not always the way to promote social distancing compliance during a pandemic. But it's surveys mixed with questions via Amazon Mechanical Turk (meaning participants in a narrow demographic and were paid) so caution is warranted.(1) The psychologists used information from 850 adults compiled in early March and linked individuals with higher working memory capacity, basically the ability to store information briefly, with greater compliance to social distancing guidelines during the early stage of the COVID-19 outbreak.(2)

The United States reports a greater problem with COVID-19 than other countries have reported but it's unclear if that's due to a mutation or cultural. In 2003 SARS, caused by coronavirus, tore across Asia, which has strong mask usage, while in 2012 MERS, caused by coronavirus, did the same to the mid-east. Yet some claim the 2019 version in the U.S. is hitting harder because social distancing compliance is voluntary.(3) March 13th to the 25th were the first two weeks following the U.S. presidential declaration of a national emergency due to COVID-19 so that makes sense for this kind of early analysis, because social pressure wouldn't have kicked in yet. 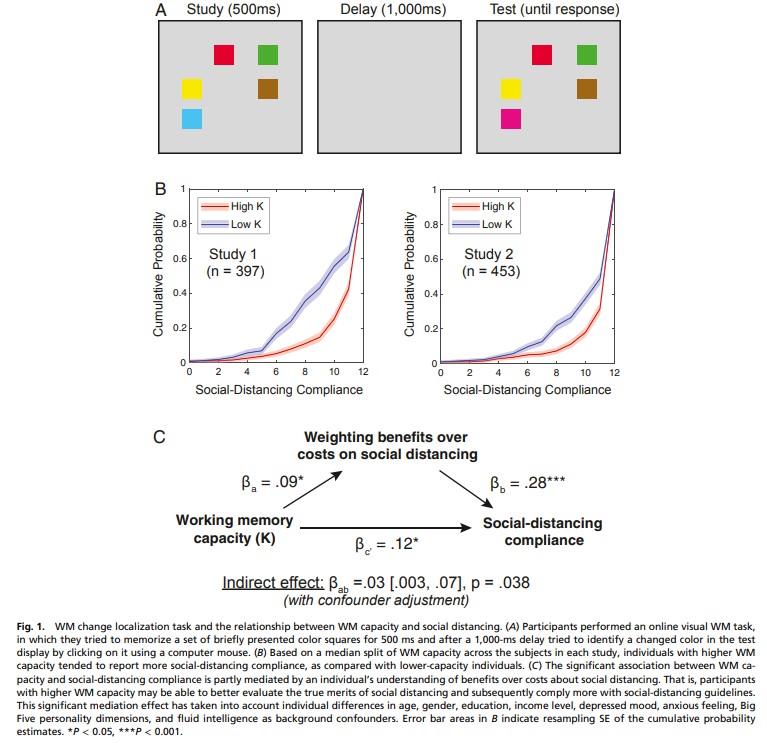 The authors acknowledge the limitations in trying to create a map of the cognitive building blocks regarding decisions to social distance, which compounds with the use of Mechanical Turk and the narrow subset of people who participate. it's unknown if respondents have social or personality disorders that may affect their decisions but have nothing to do with working memory. Yet that doesn't keep them from declaring what they believed all along, without a scientific hypothesis; that if you have worse working memory, you are more likely to basically be selfish and not care about other people.

There is obviously a great deal of cultural bias in both California universities and career government employment, which makes it easy to casually stereotype people outside the tribe and declare that science. But the evidence does not match their conclusion, it is instead more like a spurious correlation.

Science, like most things, is also a culture war, and since nebulous psychology claims also correlate working memory to intelligence, there will be an argument that noncompliance is a sign they are just stupid, but far more data show that ridicule and smears galvanize disenfranchised groups so those claims are even less constructive now than they are the rest of the time.

There is a valid research point in figuring out why some people calculate risk differently than others, maybe working memory could be a factor. But this paper does not show it.

(1) PNAS is the same outlet that published a paper claiming female-named hurricanes cause more damage, that a weedkiller turns frogs "gay", and let Facebook publish results on its experiment manipulating beliefs using their news feeds so the peer review process there has long been suspect.

(2) They have made the entire anonymous 1,159 participant data set, and how they got down to the 850 in the paper, and their scripts publicly available here.

(3) Others argue that China is lying, Brazil has no clue how many COVID-19 deaths they really have, and Japan didn't test because they were going to treat it like flu in senior citizens anyway.
Science 2.0
More Articles All Articles
About