Hank Campbell
Epicurious, a food website owned by the billion-dollar Condé Nast group, has stated it will no longer carry recipes that use beef. Because of the environment.

An elite Manhattan company plagued by lingering resentment due to its racial discrimination and pay inequity should not be doubling down on that first one. Yet they are, because an attack on meat is an attack on the health of poor people and minorities everywhere who want better lives. The site will still carry chicken, fish, and pork, so their claim only makes economic sense when you consider that their article was 'sponsored' by an alternative-to-beef company and sponsored content - advertising that looks like articles - is 60 percent of their revenue.(1)

It makes no science sense at all(2) and it's even more tone deaf that in the midst of an economic train wreck, Condé Nast wants to run American ranchers out of existence and create essential micro- and macronutrient deficiencies worldwide.

The answer may be that it's because they are headquartered in Manhattan, an enduring pocket of early 2000s self-importance the way a bowling alley was the last safe place in the 1950s version of "Pleasantville", because now joining them is Eleven Madison Park, once deemed the best restaurant in the world.  Only they are getting even crazier. 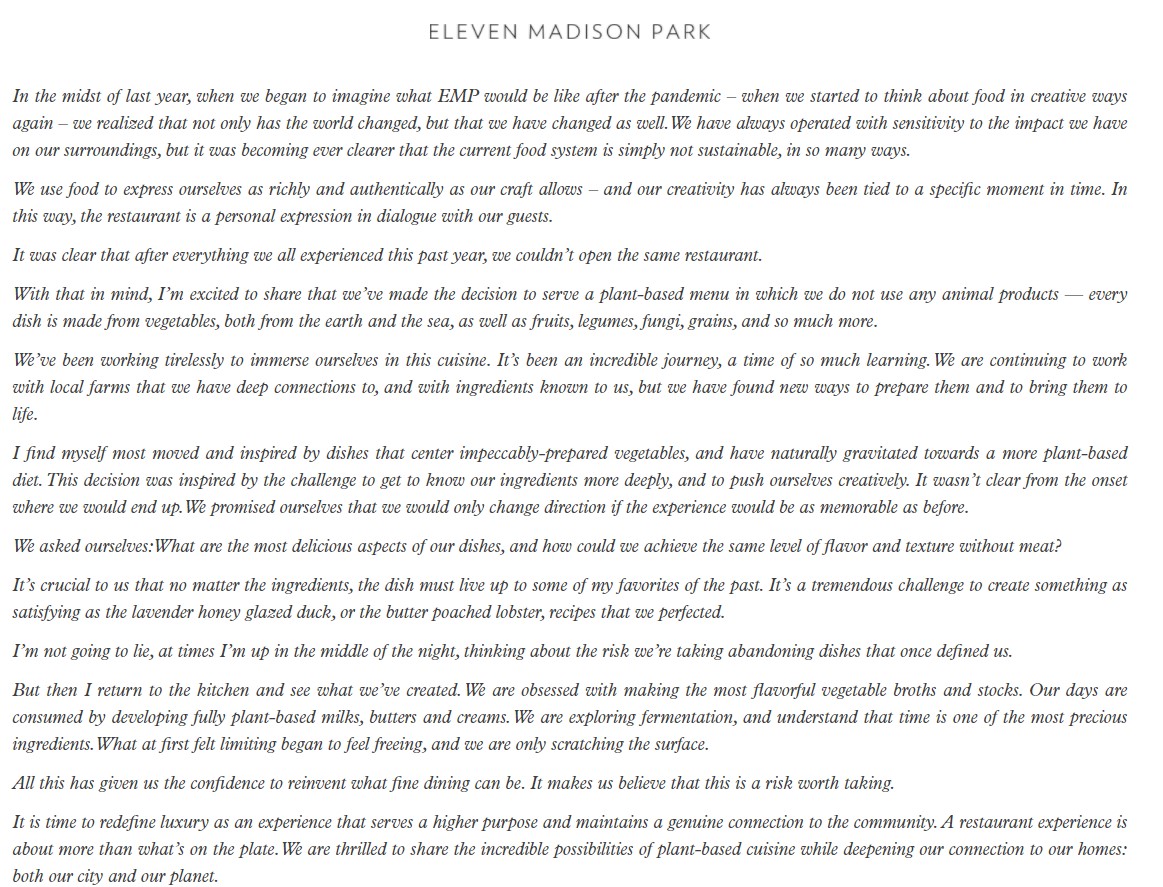 I have never been there. When I lived in Manhattan, they only took reservations a month in advance and there were never any available when I would remember to try.(3) Now I don't want to go. We get enough social authoritarianism in our daily lives, I don't want to pay an extra $500 for it. But Chef Daniel Humm lives in a bubble of rich white elites and does not see how demonizing meat means sending people in developing nations, primarily women, into a spiral of poor health and greater poverty.

Here is hoping the science community can help Chef Humm with science facts he did not learn from Chef Rabaey or at Pont de Brent but should research now.

1. Animals account for 3.9 percent of our emissions. Not the 15 percent casually thrown around when the crazy 51 percent is too silly to be invoked. Emissions are higher in the developing world, but they are also much higher for energy; billions of people burn wood and dung in homes because the World Bank, led by objections from the U.S., won't give them centralized energy unless it's solar or wind. Agriculture is not the big problem, travel is. If Chef Humm wouldn't tell his customers not to go to their homes in the Hamptons on weekends he shouldn't be telling poor people if they eat meat once a week they are the reason for climate change.

2. Over 25 percent of the world, 2 billion people, are small subsistence farmers, most with a cow, a goat, or some other animal that provides modest food and revenue. Telling them they should instead enjoy being vegan is so privileged even a Bard admissions officer would dismiss it as too sanctimonious.

3. Vegetable farming causes 150 percent more emissions than meat, and most land used for cattle grazing can't be used for fruit or produce or anything except grazing. Going vegan would mean more nature has to be given over to food production, not less.

Want to save the planet? Ending meat won't do it, but if you insist on doing anyway so the number one target for your virtue signaling should be lamb, not beef. And the losers if you win won't be "factory" farms, they will be billions of subsistence farmers in other countries.

What would lower emissions? We can absolutely make better corn using science, but Europeans not only oppose modern chemicals, they mandate bans on it for small countries that want to trade with Europe. We can even make cows that belch less.

The irony of all this is that Chef Humm is telling customers what they will like or they should get out and I applaud his free market sensibilities even if it is masked in social authoritarianism. He is putting his wallet where his beliefs are.

Because it is a free market and I am not a Manhattan elite who wants to tell you how to live, I believe you can still go, and I hope you enjoy it. Just be sure to order a chaser of aspiration to wash down the self-importance - and try not to think about the little people you're relegating to poverty and poorer health outcomes.

(1) Some quotes from employees:

“It’s weird what we’re doing for money”
“Once I decided this was my year of selling out, I’ll do anything.”

(2) Though it doesn't have to make any science sense. When Chipotle declared they were GMO-free, they were lying. Except when it is marketing it is not lying. They stopped using GMO plants for the oil in their burritos but the meat, cheese, and soda were all still produced using genetic engineering. They still claimed they were GMO free and no customers were the wiser, but I bet they felt healthier eating those aluminum-foil-covered heart attacks.

(3) Manhattan is littered with Michelin starred restaurants but in my opinion you can't get any better than Gabriel Kreuther. They even got me to eat vegetables the last time I was there - the difference was they didn't lecture me on why I should. Here is hoping that they won't have become cultural mullahs like Eleven Madison the next time I am in town, but I would not be surprised if they have. If there is one thing you learn about rich people in Manhattan, it's that they are followers.
Science 2.0
More Articles All Articles
About