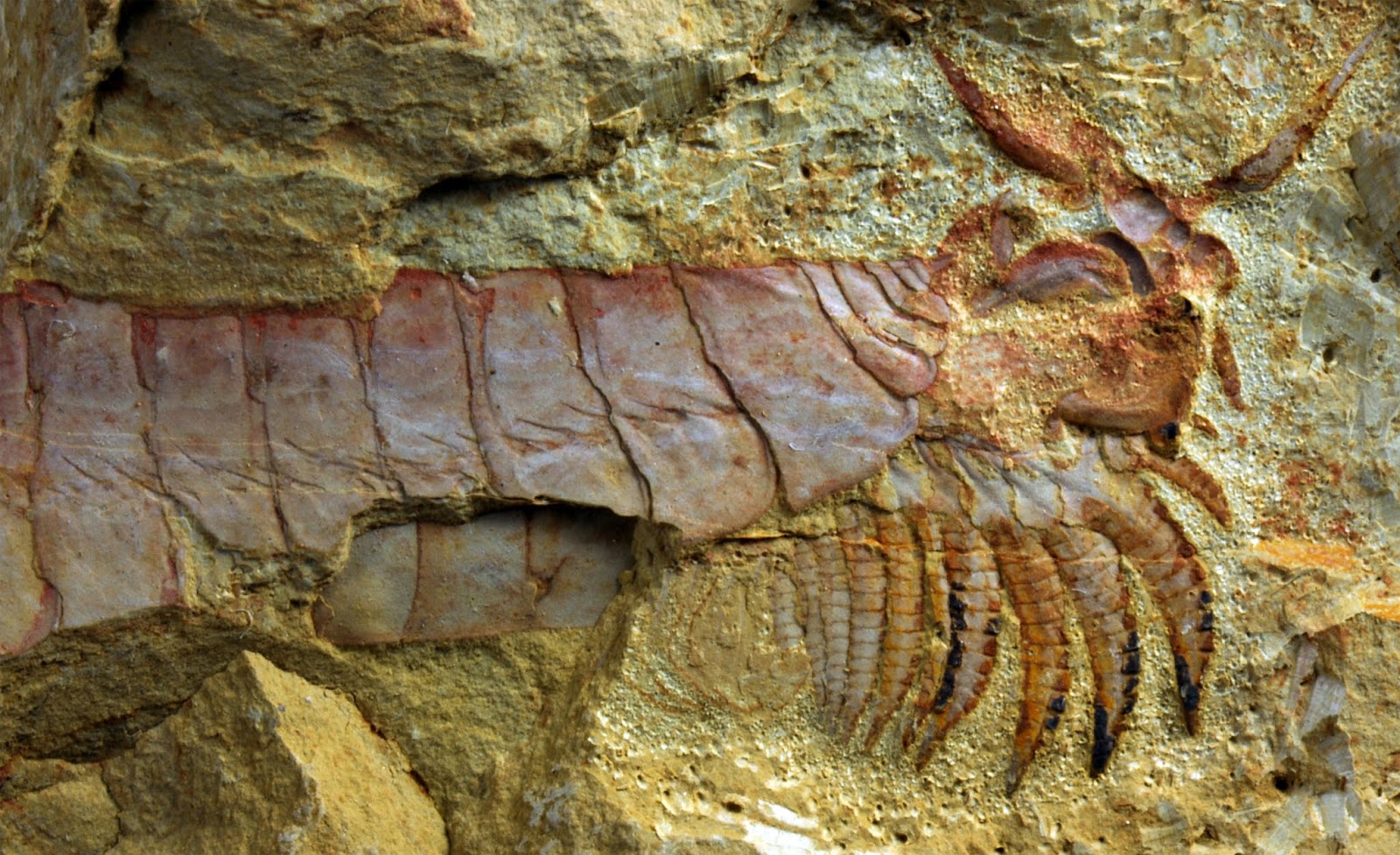 This fellow is Chengjiangocaris kunmingensis, a rather glorious fuxinhuiid arthropod. While he looks like he could be from the inside of the Lascaux Caves and their fire-kissed Palaeolithic paintings, albeit by a very ancient Picasso, he was found at a UNESCO World Heritage Cambrian fossil site in southern China.

As his name indicates, he is from a locality in the Yunnan region near Kunming. He is unusual in many ways, both because of the remarkable level of preservation and the position in which he was found. This fellow proved to be a rather fortunate specimen as his carapace had flipped over before fossilisation. This allowed researchers to to examine the fuxianhuiid's head in greater detail than ever before. Most specimens are found with a carapace in the way.

The study published in Nature, highlights the discovery of previously controversial limbs under the head. These limbs were used to shovel sediment into the mouth as the fuxianhuiid crawled across the seabed.

Using a feeding technique scientist's call 'detritus sweep-feeding', fuxianhuiids developed the limbs to push seafloor sediment into the mouth in order to filter it for organic matter – such as traces of decomposed seaweed – which constituted the creatures' food. Fossils also revealed the oldest nervous system on record that is 'post-cephalic' – or beyond the head – consisting of only a single stark string in what was a very basic form of early life compared to today.

"Since biologists rely heavily on organisation of head appendages to classify arthropod groups, such as insects and spiders, our study provides a crucial reference point for reconstructing the evolutionary history and relationships of the most diverse and abundant animals on Earth," said Javier Ortega-Hernández, from Cambridge's Department of Earth Sciences.

Ortega-Hernández co-authored the paper with Nicholas Butterfield and colleagues from Yunnan University in Kunming, South China. The Xiaoshiba 'biota' in the Chiungchussu Formation Maotianshan shales of China's Yunnan Province is similar to the world-famous Chengjiang biota, and also produces spectacular arthropod fossils.

The recent publication on the Qingjiang biota found on the edge of the Yangze craton along the banks of China’s Danshui River are similar in age, competing with the world's most famous Cambrian fossil assemblage, the Burgess Shale. The roughly 518-million-year-old site contains a dizzying abundance of beautifully preserved weird and wonderful life-forms, from jellyfish and comb jellies to arthropods and algae and is about 10 million years older than Burgess (at 508 million years) if you're following Chinese lagerstätte, the site is just over a thousand miles from the Chengjiang site. Photo credit: Yie Jang (Yunnan University)
Fossil Huntress
More Articles All Articles
About