American Hostage Situation: Buffalo Terror Shows Why Crazy People Should Not Have Guns.
By Hontas Farmer | May 19th 2022 10:38 AM | Print | E-mail

The racially motivated terrorist in Buffalo is just the latest example of people in our communities who everyone knows are nuts, but no one will do anything about them. Part of this is because in our country we won’t take constitutional rights until a crime is committed. A bigger part of this is because our communities will not confront such people out of pure FEAR. A Critical Race Theory perspective of this would say that, regarding the Buffalo shooter, White racial solidarity was why he was not confronted by another White person about his beliefs. Beliefs that are extreme even by the standards of people who believe the “White Replacement” conspiracy theory. He has a manifesto that makes the organized KKK look sane and rational by comparison.

Most of whom think that the answer to White Replacement is to have a White wife and White babies.

The Buffalo shooter needed to have someone in a pointy hat sit him down and inform him of this basic fact. The answer to a low birth rate is to raise the Birth rate. As an African American, and an transgender person, there is nothing fundamentally wrong with that. People are attracted to who they are attracted to. If they want the world to have more people in it who look like them so be it. There can be no racism in a person's openly declared preferences (Unless they are interracially entangled on the sly and ashamed of it or something like that.) SEX, procreation, by some means was the solution to this guys problem. Even just donating sperm anything but shooting a bunch of people.

I’ll wager why no one in his family or community really stood up and said something. Yes a sense of White solidarity may have been a part of it. Some may have on some level agreed with him.  There is a bit of evidence to support this. 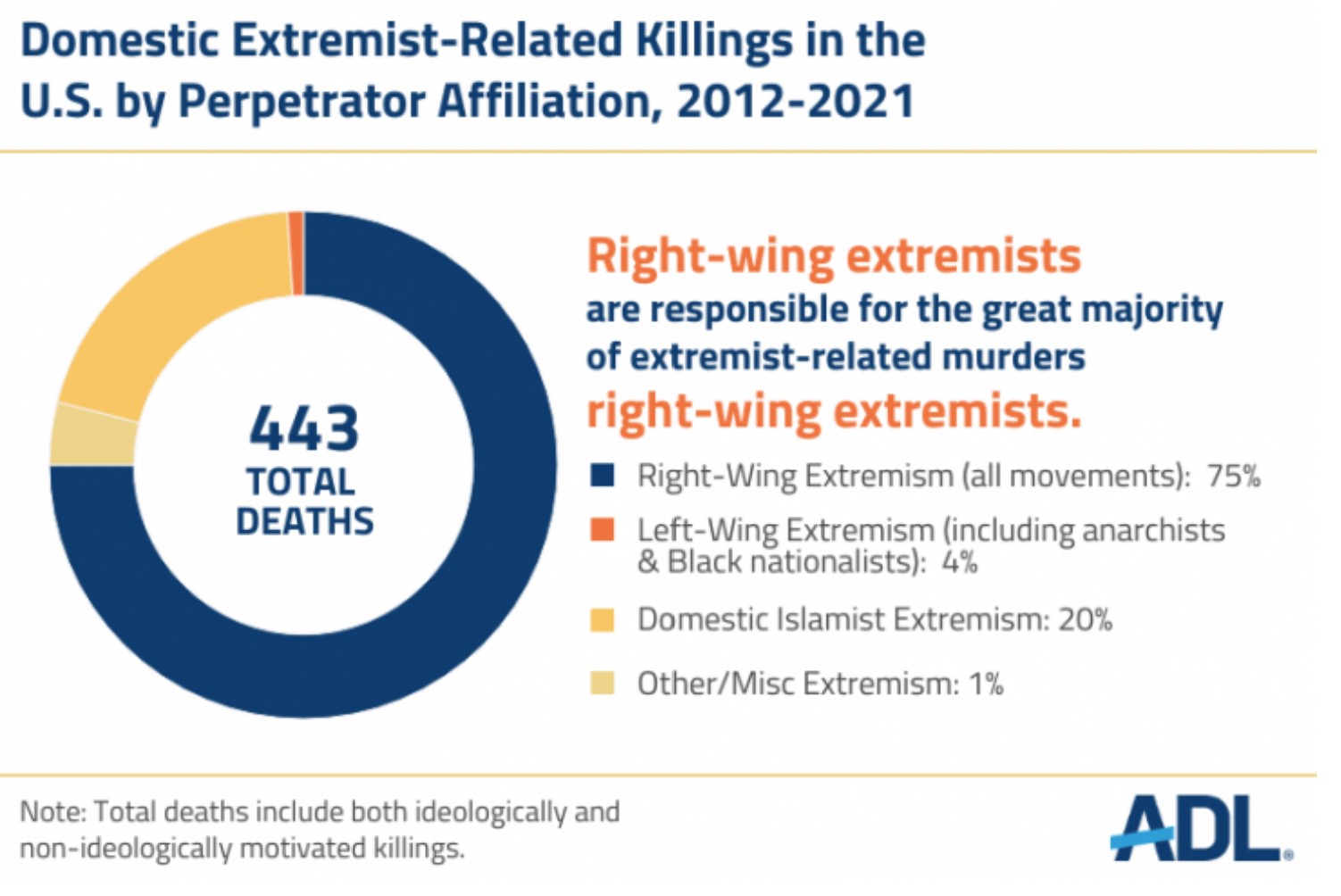 My take on this data. If on average each extremist killed two people that means about 160 White Right-wing extremist murderers.

There are millions of right-wing people, who are White, and who have extreme views on race. Many of them will use violent language or imagery but also realize killing would be counterproductive even to their cause.   Most of them would never kill anyone outside of say a civil war or something.

I hate to say it but social groups of extremist individuals may have a role to play in controlling people like the Buffalo terrorist.  They would be or could be people whose opinions the killers value and to whom they might listen and be diverted from acting in this manner.   They'd still be horribly racist but at least they might not kill.

The problem, the root problem with that 160 or so racist murderers wasn't just racism it was being so unhinged that ordinary laws, or social norms, even those of supremacist groups, would not stop them.

As I thought about this it came to me that we have a similar problem in the Black community. Gangs and gang violence and the code of silence around them. How many people in gangs are responsible for the killings? How many are just like this terrorist, crazy, heavily armed, killers looking for an excuse and protected by racial and other forms of solidarity? How many are barely in a gang but really so crazy and homicidal that the gang exercises no real command authority over them?

Guns in crazy hands are the problem, and we need a real solution.

The bigger issue is they likely were scared of him and his guns. That he was so crazy he was too much even for an area so White he had to drive 200 miles to find Black people to shoot. He was a real example of the kind of person who would or could shoot up a school and really threatened to, or was accused of having done so. (To be honest him coming to school in full hazmat for one week given the pandemic was the least crazy thing.) That is a level that is so far off the reservation even an organized group like the KKK would’ve had to wonder if he wouldn’t shoot them too.

I offer no solutions for this but only the imperfect suggestion that all gun owners be required to get a mental health checkup, one hour with a counselor every six months at least. Furthermore, having been unwillingly placed in a mental hospital should lead to a total loss of gun rights for two years. Simply seeking help should not do this. To buy a gun should require a new mental health check within the month before. This should be federal law.

I say the above as an Illinois FOID (Firearm Owners Identification Card) holder and one who fully supports that the US 2nd amendment right has a place in the modern world. Reasonable regulations are needed. We need a way for anyone who has a gun to get treatment … no questions asked … no fear of losing their right for seeking help.

No one who is so crazy it is likely even White supremacist organizations wouldn’t take them should not be armed. Instead, it should be normalized to be able to report such concerns to proper authorities that will help and not criminalize the person. Such criminalization can make people in a community hesitant.

Murder and Extremism in the United States in 2021 (adl.org)