An Illinois judge has overruled Governor JB Pritzker's mask mandate at least in the case of students who are party to the lawsuit.  It was denied being a class action and even admits that the collective bargaining agreements between teachers unions and school districts that call for mitigation efforts still stand.  From what I have been able to see at the two places I work and around Illinois Colleges and universities nothing has changed at all.   As a legal guidepost the Illinois state supreme court has found that the governor can impose an emergency health order that applies to restaurants under the same authority for these masking rules.

In this state the mandates are indoor mask wearing.  With vaxx or test for certain public buildings like schools.  No one is being forced to get a shot outside of a minority of healthcare workers.  About every educator I know or have heard from has wanted the shot or if not understands why testing regularly is needed to help slow the spread. 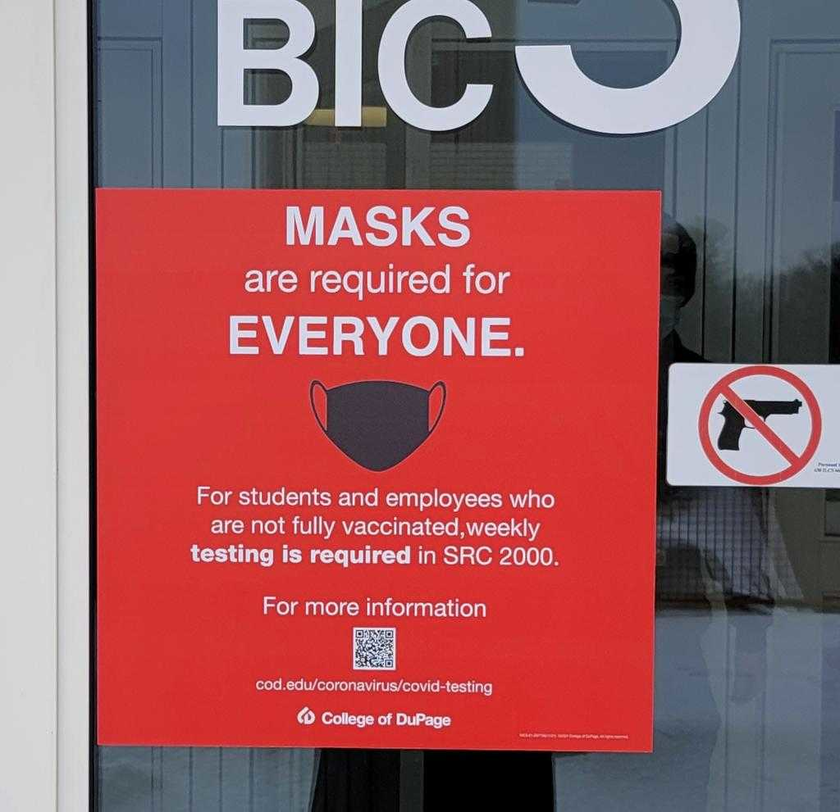 Mandates In Illinois Colleges And Universities

My direct personal observation at College of DuPage in Glen Ellyn IL (Illinois), Elmhurst University in Elmhurst IL, is that nothing has changed.  There does not even seem to be any type of movement or motion towards not having mask given the clearly articulated rules everyone knew when they signed up for the semester.

This is the attitude of many schools around the area.

There could be a college or university somewhere in IL that does not require mask, but the consensus is to follow science and apply reasonable mitigations.  If you do not want to wear a mask most college courses can be taken online and remotely.

"But I want Free Dumb" And In Person Education.

My message to all who want to battle with faculty over mask mandates or education content in schools and any faculty who find themselves in that situation.

Without teachers' school is just a building and without professors' college is just a big library.

As a counter protester in Canada said so well the price of living in a society is the cooperation of other people.  For a school that means having teachers.

If teachers are villainized, intimidated, or harassed, then then our nuclear option is to just refuse to work.

If that takes the form of a strike, or just disengaging from teaching.  Showing up putting on a film and not taking questions so be it.

School is just a building education is what you get from following our instructions. There is no right for people who are anti-science, and anti-intellectual to have the services of scientists and intellectuals to get educated.

Dumb is free education from me and from other educators cost following the rules we set.  If Sangamon County Judge Raylene DeWitte Grischow is not a fool and knows therefore she dared not touch the agreements made between teacher's union labor and administrations of schools.

I would extend this caution to any lawyer, any judge, or just anyone with a loudmouth who thinks they can force teachers to teach in schools NO YOU CANNOT.  You can rule, jargon, threaten, or otherwise try to intimidate.  All you will get as a result is a closed school or a classroom with no teacher.  Try that at college where you are grown, and the faculty are grown, you'll get treated like a grown person who breaks any other rules.   In college your option is to take class remotely not to try and force in person class to be on your terms.

A youtuber I support but disagree with sometimes, David Freiheit of the channel Vivai Frei supports the anti-mandate, anti vaxx, and some anti Trudeau truckers. he is a very smart man in his field, but he does not get the fact that science does not state absolute philosophical truths worked out via logical discourse. There are times we do talk that way but in the scientific method data reigns supreme.  When we do discuss things in a more philosophical way, we will render that in the form of an equation, that can make predictions, which we can compare to data.  He is not a fool though and was willing to speak to the counter protestors.

In a US American context, we could assume safely that one side was right wing, another left wing, etc.  In Canada even demonstrators who are very polarized seem polite.  In fact, I am confident that the people being violent on either side up there are Americans going up to Canada and acting a fool.

Another key difference is that the mandates in Canada are mostly Vaxx or you lose your job, Quebec even almost had a Vaxx or Jail mandate by way of a special tax.

For my personal view a Vaxx or jail, or vaxx or expulsion mandate is too far.  No one should be forced to inject anything into themselves.  At the same time while the vaccines are not 100% invincible protection, they make one exponentially less likely to get or spread the disease than an unvaccinated person.

As such it is reasonable to require them as part of a complete system of mitigation that can accommodate the unvaccinated as we have in most places in the United States.

A hard mandate of the Canadian kind is in another category.  The protest in Canada were about avoiding a level of mandate that would cross a line.  A line no one in the US anywhere nearby.

That said I can only imagine a US version of this.  Likely a convoy of trucks festooned with neo-cofederate symbols rolling into Washington DC a majority black city to bray about their Free Dumb.

The bottom line.  You can have your freedom.  But if you live in a society with others that means following the rules society sets forth.  We live in a society where minorities who are such by nature have protection.  Choices you make can and will be held against you, especially if they affect the life and health of others.

So, if you want your kid unmasked homeschool.  IF you don't want to wear a mask in college, go remote.  Campus is our society, follow our rules or be gone.