Bill Maher's Positive Covid Test Does Not Show the CDC Is Wrong. If Vaccinated No Mask Required
By Hontas Farmer | May 14th 2021 12:27 PM | Print | E-mail

Resistance to giving up mask is the new anti-mask.  Indeed, the fact some people think it does prove that they have no idea how vaccines work.  They do not prevent infection.  Vaccines teach the body how to kill the virus so quickly that infection does not result in disease (1) (2).  Such facts were never the real point for many people.  The issue was that mask became a way to signal belonging to a political/social group during a US election year.  It became a way for elite doctrinaire (often with doctorates) liberals to show their non-existent moral and intellectual superiority.   Something which I am sad to say is quite common in such circles.   Such is why like Richard Feynman I would rather hang out with working people.

For example, read much of what is and will be written regarding Bill Maher. He has SARS-COV-2 the virus first detected in Wuhan China and native to the bats of southern China.  He will not be “sick” with the virus. The shot does not create a magical barrier of virus invincibility.  Yet look at how so many blue checks on Twitter still write on this as of May 14th 2021.  The paranoia is in canceling a recording of his show because a vaccine is doing what it does.

Once one is fully vaccinated it does not matter if the virus is in their system.  This is the way every vaccine ever has worked. (1) (2).

Mask Are Not About Covid They Are A Socio-Political Statement.

In certain social and political circles, it has been totally acceptable and not unjustified to sneeringly speak of anyone who is anti-mask as being anti science.  What was never great is how such talk also became charged with politics related insults, and statements of the moral and ethical superiority of all who wear mask, and who will vote a certain way.  Now many such people are saying they still want to wear mask and trying to paint it as a virtue.  IT IS NOT.

For example, here in Chicago one Stephanie Miller of WCPT radio was talking about Maher like he is a “COVID denialist”.  While lamenting how the presence or absence of a mask was a good way to tell who an “insurrectionist” is or a “covidiot” or a “MAGAt” etc.  She is not alone at all in speaking that way.  (Frankly like an unfunny establishment supporting version of Jimmy Dore.  He managed to have a following but not resort to sheer tribalism and hence get more actual results.)

Now that the CDC has said that someone who is fully vaccinated can go mask less it is now anti science to say otherwise.   If you are one who is fully vaccinated, and have the option of not wearing a mask, and chose who wear a mask, you may be perpetuating the idea that the vaccines do not work against all empirical data.  If you are such a person congratulations, by your own logic, you are now the covidiot.

I will point out such people are, in my opinion, worse than the anti vaxxers of previous days.  You see they had certain principled reasons to be anti vaxx.  So, they did not get vaxxed.   They were the ones called idiots… they did not call other people idiots while touting science.    To doubt science now that it goes against what you want to do because of political, and social concerns is far worse.  It is like what street gangs do wearing different colors but without the socioeconomic oppression.

The US Works Based On Liberty.

It does not matter that some people who do not want to be vaccinated and do not want to wear a mask exist.  That is their life, their health, their body, their choice.  They will catch the disease and suffer the consequence of catching the disease.  Maybe some of them feel that catching it will give them a more robust immunity?  Maybe some of them have health reasons that they cannot be vaccinated.  It is none of our business.

The root of all authoritarianism lies in the idea that the group knows better than the individual what they need.  As Joe Biden is saying it.

After a year of hard work and so much sacrifice, the rule is now simple: get vaccinated or wear a mask until you do. 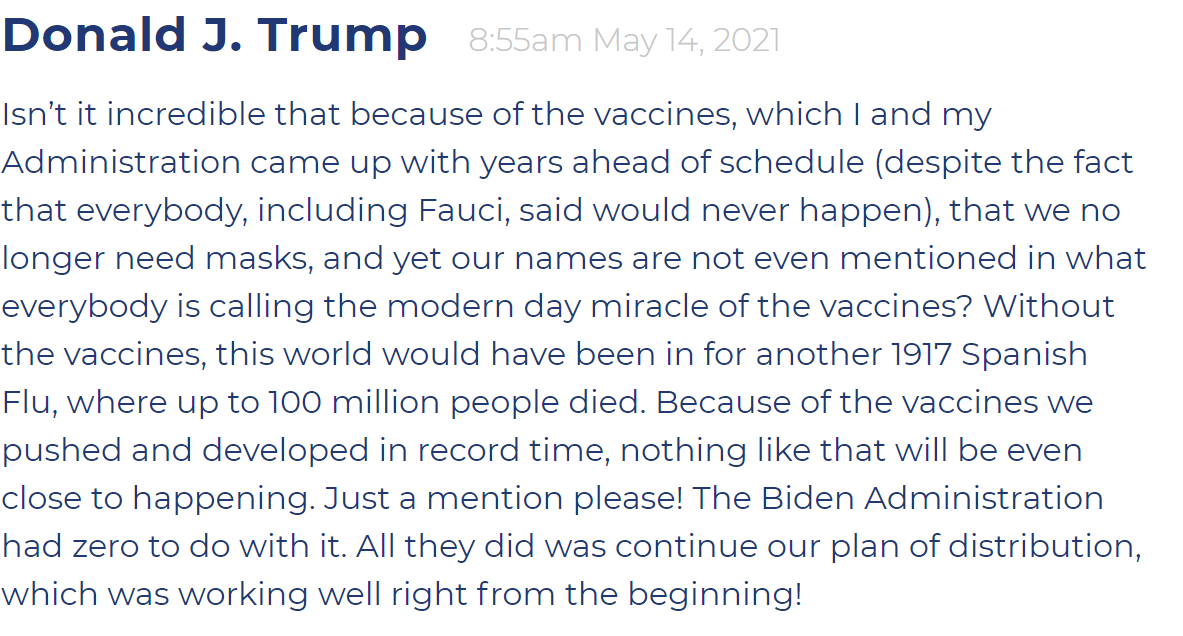 Trump trying to claim some credit.  If media want to make his supporters get vaxxed a bit more easily they should give him some credit. Who cares about the damn credit just get people vaccinated.

To me masks were always about COVID not politics.  In fact, I was wearing mask before it was cool due in large part to the early warning I got because I follow youtubers from various countries.  Some either focused on China and Asia Pacific geopolitics (China Uncensored), or were ex patriots who lived/live in China ( ADV China), or were Chinese people who YouTube about Tech ( Naomi Wu).  All were talking about what was going on long before that.  The others who had some expertise in microbiology were looking at the data and the circumstances Dr. Chris Martenson (Peak Prosperity). I also noticed genuinely nice, polite, Chinese people, speaking in mandarin in my local Walgreens buying up mask.  Which is when I say… I should too.  Chicago had direct flights from Wuhan after all …  All of which painted a picture of a very bad respiratory virus.  Anyone willing to listen would have seen that.

I could rail on about how the Democrats and Republicans all failed to show real leadership which made a bad situation 2-10 times worse.  What has done is done. Blame the Chinese Communist Party for lying and obfuscating from day 0 about this virus (3) (4) (self). Here we are time for a victory party. We should have a big HUGE July 4th, with ALL living presidents locking arms and signing God Bless America.  As we all flood the streets to dance.  Think like VJ day because victory over SARS-COV2, the CCP Virus

Waiting until some arbitrary numbers of people have been vaccinated before we loosen up will only make reaching herd immunity take longer.