The Chinese Space agency has achieved something interesting by launching the first part of their own space station.  This is not a breakthrough as space stations have been around for a while.  More science done in space will inevitably be good for humanity.  What is not good is the careless way they did their launch using a booster which will re-enter with no control at all, and which has a chance of hitting a populated area.  Human habitation areas are so small relative to the surface of the Earth that it is unlikely that the spent rocket body will hit anywhere near anyone.

Who Is Under the Rocket's Track? 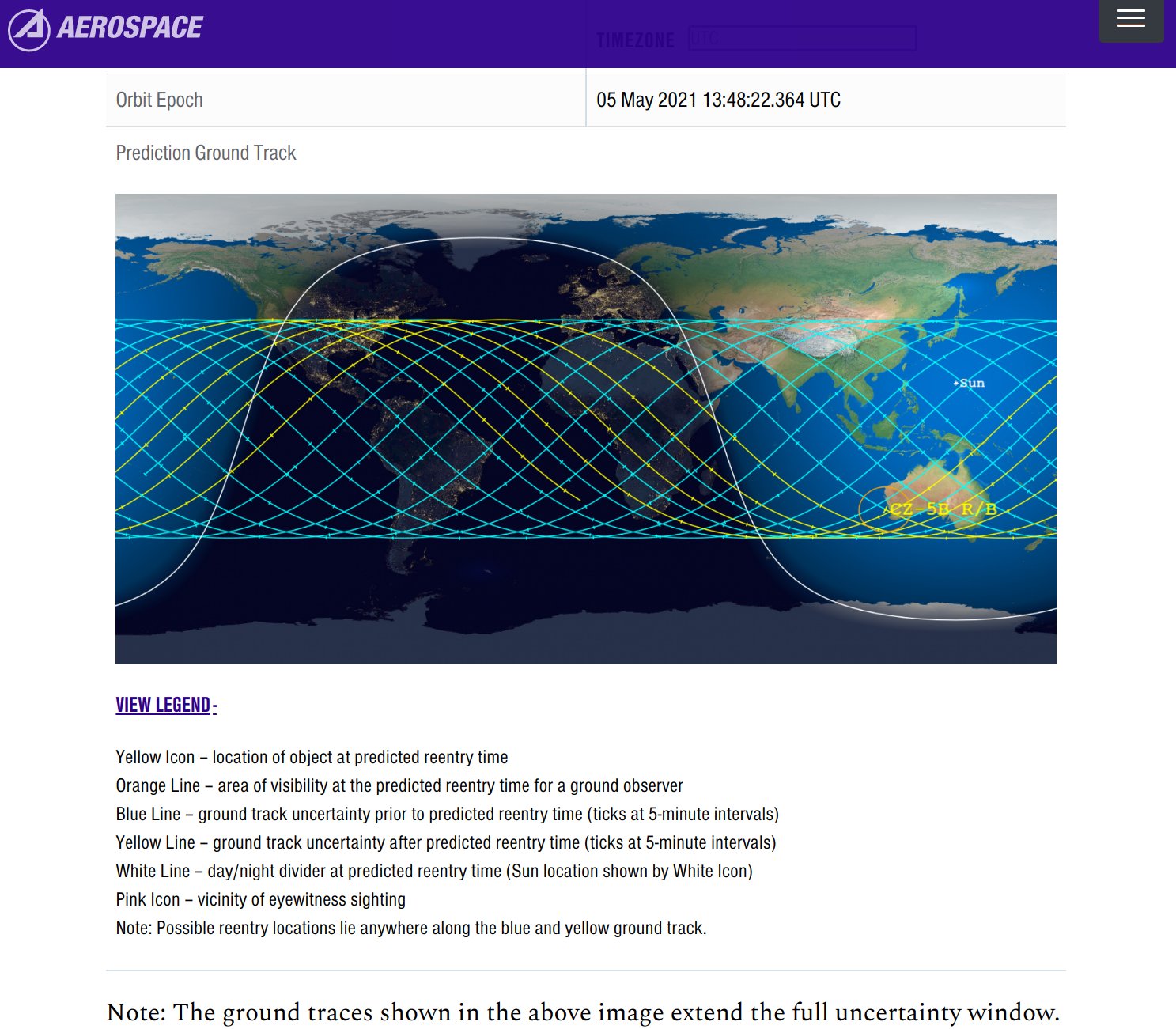 Notice that the orbital path of the rocket excludes large areas in the north and south.  That said it passes over temperate and densely populated regions of the world. Of those regions it passes over 2/3 of that track is the ocean.  Most of the rest of that track includes exceptionally large areas which are relatively unpopulated such as the Sahara Desert, the Gobi Desert and the Amazon rain forest.    For the sake of ease say 1/3 of the land area under the path of the rocket body is inhabited enough to at least having at least one person per square mile.  This leads to at least an 88% chance that you will not be hit by the rocket body or have any part of it come near you.  That is a rough and gross underestimate.

So, do not worry about this.  Worry more about crossing a street.  In much of North America we can worry more about death by heart disease than this.

China under the rule of the Chinese Communist Party has been host to numerous atrocities committed against the very people they claim to represent.   Such as possible slave labor and probably genocide against the Uighurs (Mattis 2021), oppression of religious minorities ( Haney n.d.) (Yue n.d.), and jailing of Hong Kong democracy activist (Lo n.d.), and so on.  This rocket launch was not one of those.

It was progress in their space program which could be done better. Hopefully, they will do better with the next launch.  Then also stop committing atrocities.   Then also, as a new superpower, learn that the way to stay a superpower is not by force alone.  Having   force and influence should be to spread some sort of humanitarian principle.  If their “socialism with Chinese characteristics” is a principle that leads to dumping space junk on the rest of the world then they can keep that.   That is as wrong headed as an American being “guided by the beauty of our weapons” as we bomb various parts of the middle east.

Haney, Stephanie. n.d. "Disturbing undercover video shot by a survivor's husband reveals the brutal treatment of Falun Gong followers inside a Chinese labor camp where many have died from alleged torture." https://www.dailymail.co.uk/news/article-7059781/Undercover-video-shows-brutal-treatment-Falun-Gong-practitioners-inside-Chinese-labor-camps.html.