Black holes are hot. Well, thermodynamically these suckers are freaking cold, but they do attract more attention than hot supernovae. And with attention comes recognition. As announced last month, as much as 97% of the $ 6.3 mln 2016 Breakthrough Prize money for physics went to black hole research.

More recognition is to be expected. That is to say: it is hard to imagine this year's Nobel Prize for physics not going to those who created microphones sensitive enough to listen to black holes waltzing and whirling in galaxies far away. The recordings are in stereo and rather modest in signal-to-noise, but soon gravitational wave observers will record with higher fidelity, across a broader frequency spectrum, and with multiple microphones giving us omnidirectional full surround sound.

LIGO's success in listening to black holes does not imply that astrophysicists have given up on imaging black holes. On the contrary. It is likely that this year we will witness press releases from the event horizon telescope collaboration, and last week NASA issued a press release on it's plans for IXPE, the Imaging X-ray Polarimetry Explorer mission to study "stellar and supermassive black holes, neutron stars and pulsars".

In this blogpost I already made my Nobel in Physics prediction for this year, and let me add another one: during the year we will see lots of pop science articles thoroughly misrepresenting black holes. The first one just came in. It's Discover Magazine covering NASA's IXPE mission with a piece entitled "NASA plans to peer inside a black hole".

Now that is blatant nonsense. For sure NASA will not peer inside a black hole, and no one should expect them to do so.

You need some astronauts to build a cosmic wall for you. A huge spherical shell of bricks centred around you. Regular red 4 lb bricks will do fine. But you will need loads of them. A tredecillion bricks to be precise. That's going to render you a thin spherical wall as heavy as our whole galaxy and positioned far beyond the orbits of the planets in our solar system. In preparation you start reading up on Schwarzschild radii, and conclude that in order to prevent the shell of bricks to form a black hole, the spherical wall should be large enough for a pulse of light starting at the center to travel more than 100 days before reaching the wall.

So you instruct an army of astronauts to build a spherical brick wall with a radius somewhat larger than 100 light days. For the given total mass of bricks, this radius yields the particular advantage for the astronaut bricklayers building the wall to experience a gravitational acceleration due to the wall comparable to the gravitational acceleration at earth's surface.

Once the sphere is complete, earth is shielded from any starlight not emerging from sun. Yet, nothing changes for us in terms of gravitational phenomena. Earth continues its orbit around the sun, and people continue to walk on earth, fly in airplanes, and launch rockets. All of this is the case, thanks to Newtons's shell theorem (or if you prefer, thanks to it's general relativistic cousin Birkhoff's theorem. In simple terms, this theorem states that a uniform spherical shell exerts no gravitational force on objects (Newtonian view) or doesn't bend spacetime (Einsteinian view) anywhere inside, while on objects anywhere outside it exerts a gravitational force (bends spacetime) equal to the force (bending) that would result if the full mass of the shell would have been concentrated at it's center.

As long as your spherical cosmic wall retains a radius larger than 100 lightdays, no black hole will ever get formed and all is safe. But guess what. Under it's own gravitational force the sphere of bricks starts shrinking. First slowly, but then at ever larger speed. As soon as the sphere shrinks to less than 100 light days radius...

... nothing happens. People continue walking on earth, and the planets continue their orbits around the sun. Nothing whatsoever changes to the gravitational phenomena inside the cosmic wall. This cosmic wall is getting smaller but stays spherical in shape, and the shell theorem still applies. 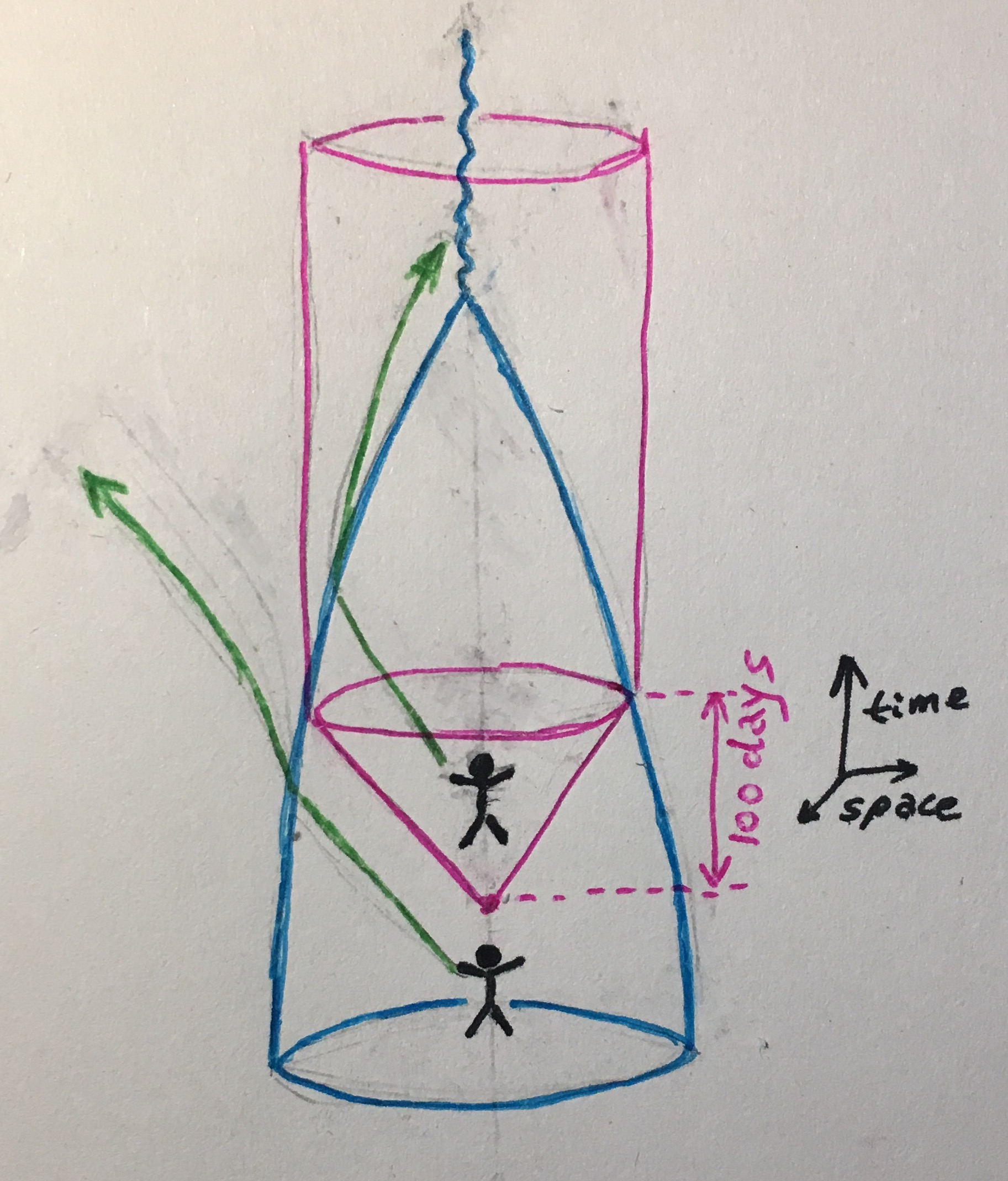 Spacetime diagram of event horizon (pink) formation due to infalling shell of matter (blue). Time runs upward. Two outgoing laser flashes (green) are shown, one before the horizon forms, and one after.

A 100 days before the cosmic wall passed the critical radius of 100 light days, an event horizon got initialized. A boundary between an inside and everything else outside that is causally disconnected from the inside. This horizon started small somewhere. It could have started in your belly or in mine. Either way, none of us would have noticed. The horizon expands at the speed of light, within a fraction of a second including all human beings, and reaching the shrinking spherical wall exactly the moment it's radius passes the threshold of 100 light days. Once the spherical wall has fallen thru the horizon, the horizon stays constant in size measuring 100 light days in radius.

This horizon seems a boundary entirely abstract in nature. Yet, it is a boundary that acts as a watershed in spacetime delineating markedly different futures, different destinies, on either side. Your destiny becomes apparent much later and well after the spherical wall passes thru the critical size of 100 light days. In fact, the earliest you would be able to know for sure you are heading towards a grim future disconnected from the future outside, is 100 days after the spherical wall passes thru the critical radius of 100 light days. Even then you would still experience the same gravitational phenomena, and earth would still orbit around the sun as if nothing had changed.

But what then is the destiny awaiting you? Would you be teared apart? Would spaghettification happen at some point?

No, none of this is going to happen. No matter how closely the wall of bricks approaches you, the shell theorem will keep you safe from any deadly gravitation effects. So then what disaster will happen? By now that should be clear. The shell theorem doesn't protect you from being hit by a brick. And at some moment a true giga-tsunami of bricks will crush you out of existence.

Does the above puzzle you? Does it give you an uneasy feeling of retro-causality creeping in? Isn't it strange that a horizon would start to grow 100 days before the wall of bricks passes thru the critical radius? What if, seconds before the critical radius is reached small rockets connected to the bricks would fire thereby reversing the collapse of the wall and preventing the critical radius to be reached? Would the horizon that started growing 100 days earlier somehow be eradicated?

Such reasoning is based on the wrong intuition of a horizon being some tangible boundary. Black hole horizons are not tangible objects. They represent boundaries between distinct futures. If, at the last minute, the brick wall collapse gets reversed, we have to conclude that no horizon started to grow 100 days earlier. And no, this does not introduce any retro-causality as all that changes is in the future.


Twitter: @HammockPhysics
The hammock physicist
More Articles All Articles
About