Pseudoscience Creeping Into Your Conference? A Case In GMOs And Glyphosate
By Kevin M. Folta | February 13th 2016 06:04 AM | Print | E-mail

Back in November I received an email from Dr. Alison Van Eenennaam.  We both were planning to attend the Plant-Animal Genome (PAG) Conference in San Diego in January.  She pointed out one session in particular—a session called ONE HEALTH Epigenomics from Soil to People.  Here’s the schedule for the session.  Red flags anyone? 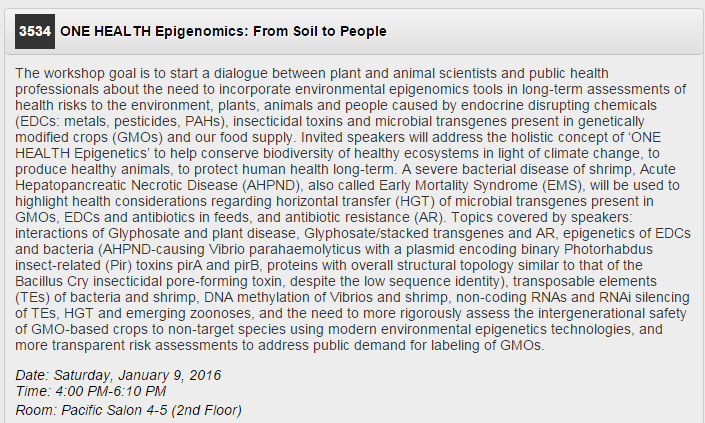 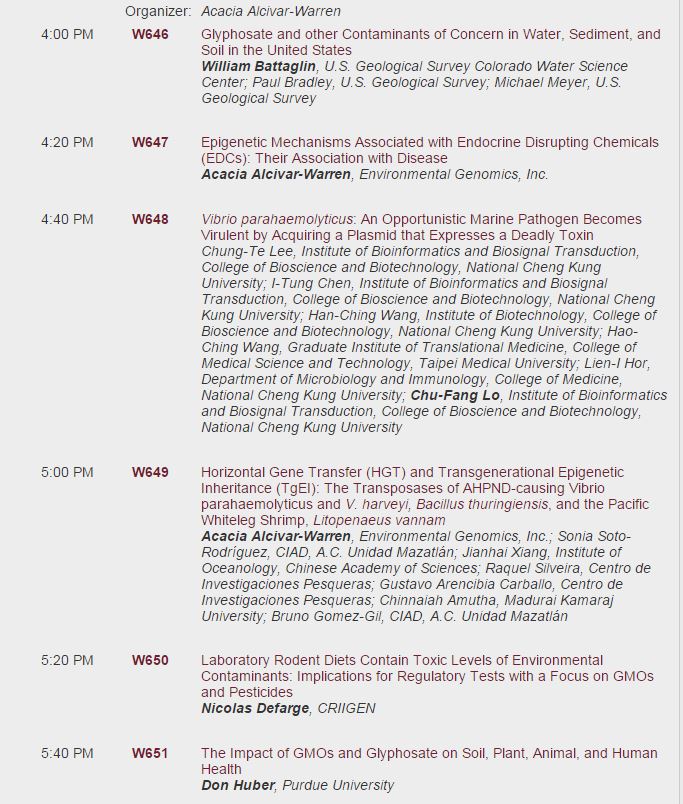 You can see from the session that the presentations were an odd mix.  The session was coordinated by Acacia Alciar-Warren, a veterinarian with a molecular biology background in shrimp relatedness. Most of all, none of the topics had anything to do with epigenomics.  Or genomics.  I sense that some genomics-relevant tag line was required to apply for a session in a genomics conference, so that was it. Huber and Defarge (from the Seralini program) represent known special interests against modern biotechnology, and have been widely criticized for false claims or lousy work.

Alciar-Warren was also the session moderator.  She dominated the session and asked the vast majority of the questions. She also steered the conversation.  It was a bizarre and disarticulated session, featuring an odd mix of legitimate science that was over interpreted, as well as rehashed data that are known to be false—presented with authority as scientific fact.

For example, two reasonable talks on shrimp diseases were hijacked by the moderator and Alciar-Warren steered from their legitimate moorings to tangents on the dangers of glyphosate, Bt and T-DNA inserts. The speakers even seemed confused.

The Seralini lab’s presentation was the recent PLoS One work, the paper that says that lab rodent feed is hopelessly contaminated with “GMOs” and pesticides, and we can’t trust any baseline data for medical tests in animals.

Dr. Don Huber did his typical shtick, presenting a credible-sounding talk that does not match what we know about herbicide mechanisms of action and food risks.  I’ll detail his precise claims on my blog, but they were nothing new. The session was so poorly organized that it ran overtime and Huber had to quit talking before he got to the Dragon in his Garage, the deadly pathogen from GM crops that he can culture for a decade but nobody else has seen.  Oh well.

Why Does It Matter?

Most of the audience was students. Concurrent sessions were compelling to faculty over a clearly crank session on anti-GMO/anti-glyphosate and tenuously contrived associations to shrimp diseases.  Those students are potentially vulnerable to misunderstanding these messages coming from apparently legitimate speakers. Dr. Alison Van Eenennaam was one of few that were called on to ask a question to Defarge, but got an insufficient, pandering answer.

It also is important because we need to discourage hijacking of our conference sessions by agenda-driven pseudoscience.  When Huber and Defarge’s typical scientific meetings are clusters of crystal rubbers and guys laying on the ground in bee suits, we legitimize bad science when we welcome it into our scientific meetings.

Don’t think they won’t capitalize on that.  These folks are quick to remind you of when their work punctures the veil of legitimate science. When we loan them our space, it gives them the patina of quality, and demotes the quality of our conference.

Who Should Monitor and Correct Pseudoscience Sessions?

This is not just an issue in genetic engineering and ag chemicals.  The same thing is happening with creationists, climate change deniers, anti-vaxers and other conspiratorial areas.  We need to see the problem and fix it.

I thought about a good public shaming in social media, but were Food Babe tactics needed to enforce reality?  After all, we do want unpopular ideas to be welcome in scientific conferences, as long as they play by the rules.

We should not exclude apparently goofy sessions.  A few years ago I put in a proposal for a workshop at the 2014 Seeds of Justice conference.  I was going to pay my way and just answer questions about biotech for those at the generally anti-GMO audience.  Organizers were excited by the idea, until they weren’t, and my invitation rescinded.  That’s censorship, insulating your tribe from ideas contrary to the mission of its central tenets. We should never do that.

On the other hand, we always scream that science should be self-policing.  We talk about how that is a strength of the peer review process.

With that in mind, we need to identify these instances of pseudoscientific creep into our scientific conferences.  Don’t cancel them, don’t fight them, but be sure to show up.  Ask questions.  Don’t let the moderator control the discussion at the exclusion of legitimate inquiry.

Most of all, show students and postdocs how to be appropriately critical.   Teach them to confidently and politely confront those peddling soft claims and bogus science.

The mistake I made was in not advertising the session and recruiting others to show up.  I should have brought it to the attention of every scientist at PAG, and had everyone in that tiny room, asking questions and requesting clarifications.

We are in the age where bad science and activists are searching for legitimacy.  Predatory pay-to-publish provide that patina, as so do presentations at scientific conferences.  We all need to remain vigilant and read the conference program.  We need to make any suspicious sessions known to the scientific community, and make sure we are there to protect our conferences’ integrity.