Mark Changizi
Boise State University's football team is smoking, and some have wondered whether their blue football field may help explain their success...so much so that, a couple months back, Oregon State painted their practice field blue to help them prepare for playing on it.

Could practicing and playing on blue really give the Broncos a leg up? It seems unlikely.

But it seems less unlikely than it would have a decade or two ago. Not because the Boise football team is doing well -- there are plenty of years when the blue field didn't give them the magic -- but because of the many studies showing the power of color to affect behavior (e.g., see this piece).

Off the cuff, one candidate hypothesis for the benefit of blue might concern something called chromostereopsis, a tendency to overestimate the distance of blue relative to other colors. See the figure below, where the blue appears to be farther than the red. On a blue field, this means a tendency to overestimate the ground distance, which could mean overthrown passes. It would also lead to a perceived mismatch in distance to a receiver and to the ground beneath his feet, which may cause the quarterback confusion. 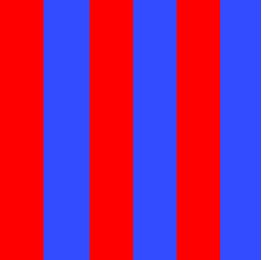 Whether this applies in the broad-spectrum conditions on the actual field is another matter. In point of fact, I did attempt to walk onto the Bronco's blue field, but practice was under way, and I was politely asked to leave.

But it got me thinking: Surely we can provide a perceptually more powerful field color pattern than simply all-blue! Possibilities are endless, but let's consider just a few:

1. Place an illusion such as the Pinna and Brelstaff illusion onto the field, corrected for perspective (and thus working on viewers only at certain spots). Players running toward the center would briefly feel that the world is spinning.

2. A more subtle idea would be to modulate the density of the artificial turf in such a way that one end of the field is coarse and the other end fine and dense. If the coarse-to-fine transition occurs smoothly, players' perceptions of distance will be altered. For example, when standing on the fine end of the field and looking at players on the coarse end, the viewed players will seem closer (and physically smaller) than they in fact are, potentially leading to an underthrown ball by the quarterback. Viewed from the opposite direction, the downfield players will seem farther (and physically larger) than they in fact are, leading to an overthrown ball.

3. Blurry streaks could be placed on the field, perpendicular to the yard markers. When we move through the world, we get optic streaks on our retina, something that indicates to our brains that we are in motion. If blurry streaks are painted onto the field, the runner's visual field may be tricked into thinking it is moving more quickly than it in fact is...and so the runner will end up moving more slowly. Blurry streaks could also be made via having the home team audience dress in colors as a function of row.

4. Street-artists are famous for their forced-perspective paintings, like that in the photograph below. The obvious painting to do for football is one depicting the opposing quarterback' momma having intimate relations with the home team coach. Sure, it would only be perceptually effective from just one spot on the field, but it would be well worth the wait!