The scientist involved in helping re-introduce the Great Bustard to the UK is “delighted” that birds released at a secret Wiltshire location have laid their first eggs.

Dr Tamas Szekely from the University of Bath says that the announcement from the Great Bustard Group comes a year earlier than predicted, and shows that the project is making good progress.

The Great Bustard is the world’s largest flying bird and although it was hunted as a trophy until it became extinct in the UK in the 1830s, it still lives in stable populations in eastern Europe. 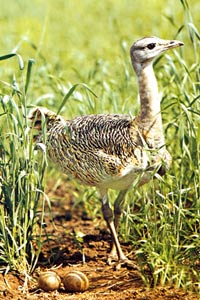 Since 2004, the Great Bustard Group has released more than 60 Great Bustard chicks, all hatched from eggs salvaged from nests destroyed by cultivation.

Due to fears of egg thieves and disturbance from bird watchers, the announcement that eggs had been laid in the UK was delayed. The eggs were incubated for a time by the female but were then abandoned. After examination they were found to be infertile.

“Males need to be four to five years old before they can breed, so the fact that the eggs were infertile was not a big surprise,” said Dr Szekely who is the project’s scientific adviser.

“What is encouraging is that the eggs were laid in the first place; unhappy birds do not produce eggs.

“The males have a spectacular courtship display which was seen in this country for the first time in over 175 years this year.

“This is a very exciting time for the project, and marks an important step towards a breeding population of Great Bustards in the UK.”

“Great Bustards are a magnificent species and birdwatchers have it as one of their top species to see,” said Dr Szekely, from the University’s Department of Biology & Biochemistry.

“They are shy and easily disturbed, so it is encouraging to see these developments.

"They next step is to see the first Great Bustard chicks hatch, and we very much hope that will happen within the next two years.”