Scientists have long struggled to figure out how the brain guides the complex movement of our limbs, from the graceful leaps of ballerinas to the simple, everyday act of picking up a cup of coffee. Using tools from robotics and neuroscience, two Johns Hopkins University researchers have found some tantalizing clues in an unlikely mode of motion: the undulations of tropical fish. 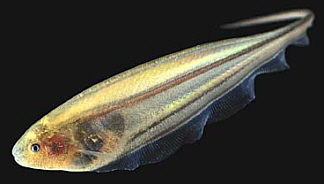 The fish is a glass knifefish, which was used in the research. It is native to South America.
Photo by Will Kirk/HIPS

Their findings, published in the January 31 issue of the Journal of Neuroscience, shed new light on the communication that takes place between the brain and body. The fish research may contribute to important medical advances in humans, including better prosthetic limbs and improved rehabilitative techniques for people suffering from strokes, cerebral palsy and other debilitating conditions.

"All animals, including humans, must continually make adjustments as they walk, run, fly or swim through the environment. These adjustments are based on feedback from thousands of sense organs all over the body, providing vision, touch, hearing and so on. Understanding how the brain processes this overwhelming amount of information is crucial if we want to help people overcome pathologies," said Noah Cowan, an assistant professor of mechanical engineering in Johns Hopkins' Whiting School of Engineering. In studying the fish and preparing the Journal of Neuroscience paper, Cowan teamed up with Eric Fortune, assistant professor of psychological and brain sciences in the Krieger School of Arts and Sciences, also at Johns Hopkins.

Cowan and Fortune focused on the movements of a small, nocturnal South American fish called the "glass knifefish" because of its almost transparent, blade-shaped body. This type of fish does something remarkable: it emits weak electrical signals which it uses to "see" in the dark. According to Fortune, several characteristics, including this electric sense, make this fish a superb subject for the study of how the brain uses sensory information to control locomotion. 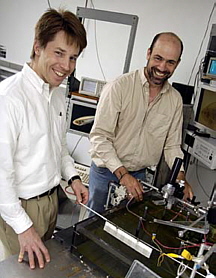 Noah Cowan (left) and Eric Fortune
Photo by Will Kirk/HIPS

"These fish are ideal both because we can easily monitor the sensing signals that their brains use and because the task we asked the fish to do — swim forward and backward inside a small tube — is very simple and straightforward," said Fortune, who also uses the fish to study the neural basis and evolution of behavior.

The fish prefer to "hide" inside these tubes, which are immersed in larger water tanks. In their research, Cowan and Fortune challenged the fish's ability to remain hidden by shifting the tubes forward and backward at varying frequencies. This required the fish to swim back and forth more and more rapidly in order to remain inside the tubes. But as the frequency became higher, the fish gradually failed to keep up with the movement of the tubes.

The team's detailed engineering analysis of the fish's adjustments under these conditions suggested that the animal's sensors and brains are "tuned" to consider Newton's laws of motion, Cowan said. In other words, the team found that the fish's nervous systems measured velocity, so the fish could accelerate or "brake" at just the right rate to remain within the moving tube.

"The fish were able to accelerate, brake and reverse direction based on a cascade of adjustments made through their sensory and nervous systems, in the same way that a driver approaching a red light knows he has to apply the brakes ahead of time to avoid overshooting and ending up in the middle of a busy intersection," Fortune said. "Your brain has to do this all the time when controlling movement because your body and limbs, like a car, have mass. This is true for large motions that require planning, such as driving a car, but also for unconscious control of all movements, such as reaching for a cup of coffee. Without this sort of predictive control, your hand would knock the cup off the table every time."

The researchers' understanding of the complex relationship between the glass knifefish's movements and the cascade of information coming into their brains and bodies via their senses could eventually spark developments in areas as far reaching as medicine and robotics.

"That animals unconsciously know that they have mass seems obvious enough, but it took a complex analysis of a very specialized fish to demonstrate this," Fortune said. "With this basic knowledge, we hope one day to be able to 'tune' artificial systems, such as prosthetics, so that they don't have the jerky and rough movements that most robots have, which is critical for medical applications."

The team's use of both neuroscience and engineering principles and tools also make it an important project for other reasons.

"So far, we have used a series of engineering analyses to tease apart some important information about how the nervous system works," Cowan said. "As we move forward, we expect to discover other exciting aspects of brain function that suggest new ways to design sensory control systems for autonomous robots."

Funding for this research was provided by the National Science Foundation.

Note: This article has been adapted from a news release issued by Johns Hopkins University.