Volcanologist Sarah Fagents from the University of Hawaii at Manoa had an amazing opportunity to study volcanic hazards first hand, when a volcanic mudflow broke through the banks of a volcanic lake at Mount Ruapehu in New Zealand.

Fagents and colleagues were there on a National Science Foundation (NSF)-funded project to study the long-forecast Crater Lake break-out lahar at Mount Ruapehu. A lahar is a type of mudflow composed of water and other sediment that flows down from a volcano, typically along a river valley.

Lahars are caused by the rapid melting of snow and/or glaciers during a volcanic eruption, or as in the case of Mount Ruapehu, the breakout of a volcanic lake. 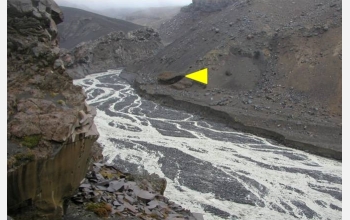 This image of the lahar channel shows the area right after the collapse of New Zealand's Crater Lake's walls. Credit: University of Hawaii 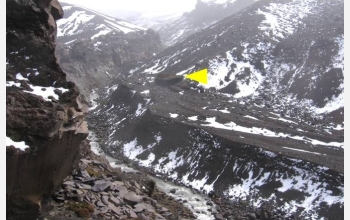 The lahar channel is pictured, just before the geologic event in New Zealand. Credit: University of Hawaii

"Lahars can be extremely hazardous, especially in populated areas, because of their great speed and mass," said William Leeman, NSF program director for petrology and geochemistry. "They can flow for many tens of miles, causing catastrophic destruction along their path. The 1980 eruptions at Mount St. Helens, for example, resulted in spectacular lahar flows that choked virtually all drainages on the volcano, and impacted major rivers as far away as Portland, Ore."

Fagents visited stretches of the lahar pathway before the breakout to assess pre-event channel conditions. Although the event was predicted to occur in 2007, the recent decreased filling rate of Crater Lake suggested that the lake bank actually would not be overtopped until 2008.

However, several days of intense rainfall and increased seepage through the bank ultimately caused it to collapse much sooner, on March 18, 2007.

A lahar warning system had been installed at Mount Ruapehu, and was hailed a success after it successfully alerted officials to the onset of the lahar. In total, about 1.3 million cubic meters of water were released from Crater Lake.

"We found a broad area covered in a veneer of mud and boulders," said Fagents. "It was an unprecedented opportunity to see the immediate aftermath of such an event. It's particularly motivating for the students who were along to learn first-hand about lahar processes in such a dynamic environment."

Fagents and colleagues returned to New Zealand a month later to conduct a more detailed analysis of the deposit. "Because the Crater Lake breakout had been long forecast, there was an unprecedented amount of instrumentation installed in the catchment by our New Zealand colleagues to capture the event," says Fagents.

Prediction of the effects of the events is of critical importance in populated volcanic regions. Many other volcanoes around the world, including Mount Rainier in Washington State, and Galunggung in Indonesia, are also considered particularly dangerous due to the risk of lahars, according to Leeman.

Fagents is developing a computer model to simulate lahar emplacement and to predict the associated hazards. "The intent is to adapt this model to account for different lahar triggering mechanisms, and for different locations, to make it widely applicable," said Fagents. "The ultimate goal is provide a useful hazards assessment tool for future lahars."