People paralyzed as the result of an accident or a serious illness are reliant on the help of others in many situations. In the Brain2Robot project, an international team of researchers has developed a robot control system based on EEG signals, which could in the future help very severely paralyzed patients to regain a certain degree of independence. You are cordially invited to attend a press demonstration of the Brain2Robot system:

To control the robot arm, the Brain-Computer Interface (BCI) developed at Fraunhofer FIRST is combined with an eyetracker, which first of all determines the direction in which the arm should move. For this purpose, the direction of the patient’s gaze is monitored by two cameras mounted on a specially designed pair of glasses. 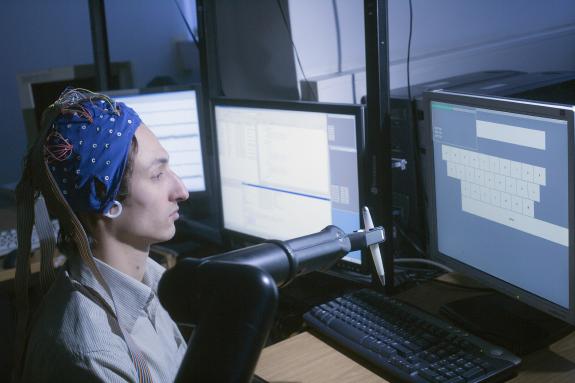 The actual movement of the robot arm is triggered by a signal from the Brain-Computer Interface. Researchers at Fraunhofer FIRST and Berlin’s Charité have been working for some seven years now on the development of the Brain-Computer Interface using a conventional electroencephalogram (EEG) of the sort employed in routine clinical procedures. Electrodes attached to the patient’s scalp measure the brain’s electrical signals. These are then amplified and transmitted to a computer.

High-efficiency algorithms analyze the signals using machine-learning methods. They are capable of detecting changes in brain activity triggered by the purely mental conception of a particular behaviour. They can, for instance, unequivocally identify patterns reflecting the idea of moving the left or right hand and extract them from the many millions of neural impulses. They are then converted into control commands for the computer.

In the Brain2Robot project, the pattern reflecting the idea of moving the right hand is used to set the robot arm in motion. The signal for the left hand triggers a certain action of the arm, e.g. grasping or lifting a coffee cup. Team leader Florin Popescu defines the project’s goals as follows: “The project is designed to help severely handicapped people cope with everyday life. The advantage of our technology is that it can directly convert intended movements into control commands for the computer.” 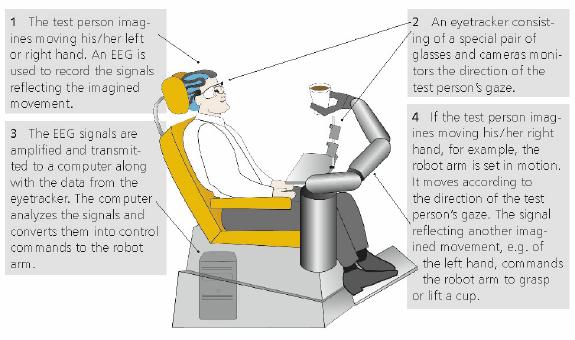 In developing the Brain2Robot system, the focus has been on medical applications, in particular the control of prostheses, supportive robots or wheelchairs. Another development to emerge from the BCI research is the mental typewriter, a communication device enabling very severely paralyzed patients to select letters and write texts. But other application areas are also ultimately conceivable, e.g. the use of BCI technology to control computer games or in automotive safety systems (driver monitoring, driver assistance).

Some EUR 1.3 million in funding is being provided to the Brain2Robot project under the EU’s 6th Framework Programme for Research and Technological Development.

Team leader Florin Popescu Ph.D., who was awarded a Marie Curie Excellence Grant in 2004, had this to say about the funding: “The grant enabled me to assemble a team of excellent young scientists at Fraunhofer FIRST within a very short period. Without the EU funding, it would not have been possible to develop the Brain2Robot system in three years.”