Some species of marine phytoplankton, such as the prolific bloomer Emiliania huxleyi, can grow without consuming vitamin B1 (thiamine), which contradicts the common view that E. huxleyi and many other eukaryotic microbes depend on scarce supplies of thiamine in the ocean to survive.

All living creatures need thiamine to live, as well as other vitamins. Organisms may produce some of their own vitamins, the way that human cells create vitamin D with help from sunlight, but sometimes they rely on other organisms to produce the vitamins they need and then consume them. For example, oranges and other fruits produce vitamin C, which humans need in their diets.

Until now, many marine microbes with cells that have a nucleus — eukaryotes — were thought to depend on other organisms to produce thiamine. If this were the case, B1 would be a major factor in controlling the growth of algae such as E. huxleyi, whose blooms are sometimes so large you can detect them from space. But the researchers found that E. huxleyi grows equally well in water that contains a precursor chemical to thiamine, known as HMP, as it does in an environment rich with thiamine. In fact, it could grow without any thiamine at all. 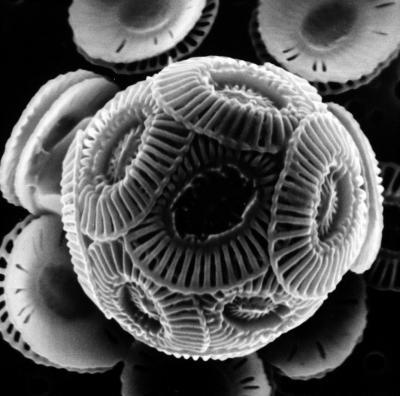 Emiliana huxleyi, a marine phytoplankton whose blooms can grow so large they are visible from space. The researchers found it does not require vitamin B1 to grow, as previously thought. Photo by Bjoern Rost, Alfred Wegener Institut

"If we added thiamine or we added the intermediate, there was absolutely no difference in the growth rate. They were growing equally well," says
Canadian Institute for Advanced Research Senior Fellow Alexandra Worden, co-author of The ISME Journal paper .

It was the discovery of a surprising biological mechanism that led the researchers toward this new understanding of thiamine. Genetic analysis had revealed 31 new eukaryotic riboswitches, which are segments of RNA that operate like mechanical switches to turn genes on or off. The researchers then found, unexpectedly, that the riboswitches were tied to genes of unknown function, not genes known to be connected with the production of thiamine.

Further testing revealed these organisms didn't only have a taste for thiamine — they liked HMP too.

"Our study shows that conclusions regarding the importance of vitamin B1 in regulating algal communities need to be re-evaluated," Worden says.

This is the second recent study to find that vitamin B1 is less important than previously thought. Another paper in The ISME Journal published this August by Stephen Giovannoni's lab at Oregon State University found that the most abundant strain of bacteria in the ocean, SAR11, grows well in an environment with HMP but not with thiamine alone.

Biochemistry suggests HMP should be more stable than thiamine in the environment, but researchers must next investigate how plentiful the molecule is in the open ocean. Understanding how phytoplankton survive is crucial for predicting how climate change could alter the Earth's marine ecosystem; for example, as the supply of vitamins in the ocean depletes. Phytoplankton take up carbon dioxide and eventually sink to the bottom of the ocean, which makes their growth a major factor in how much carbon remains in the atmosphere.

"If you want to model the global carbon cycle and you're putting into the equation that external sources of this vitamin are needed and critical for certain algae (based on prior reports), that its availability shapes which phytoplankton will grow, your predictions will be incorrect," Worden says.

She says this study shows that marine researchers need to reconsider the methods they have relied on to understand the genetic processes by which ocean microbes adapt, evolve and survive. In the past these methods have been based largely on analogy to biochemical pathways as characterized in medically, industrially or agriculturally relevant organisms, i.e., "model organisms."

"What we need to recognize is that there might be some other piece to the puzzle, that is different from that in the characterized model organisms, especially when most, but not all of the parts known from model organisms are present," Worden says.