A fossil of the ancient horse Eurohippus messelensis found in Germany contains a fetus as well as parts of the uterus and associated tissues.

Eurohippus messelensis had four toes on each forefoot and three toes on each the hind foot, and it was about the size of a modern fox terrier. Though different in size and structure, reproduction in early horses was very similar to that of modern horses. The new find was unveiled at the 2014 Annual Meeting of the Society of Vertebrate Paleontology in Berlin.

"Almost all of the bones of the fetus are still articulated in their original position. Only the skull is crushed," said Dr. Jens Lorenz Franzen of the Senckenberg Research Institute, lead author of the study. The study's co-authors are Dr. Jörg Habersetzer, also of the Senckenberg Research Institute, and Dr. Christine Aurich of the University of Veterinary Medicine at Vienna and head of the Graf Lehndorff Institute of Equine Sciences. 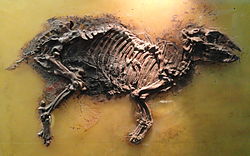 The specimen was discovered by a team from the Senckenberg Research Institute nearly 15 years ago, but its extent was not fully appreciated until it was studied using micro x-ray. The micro x-ray analysis revealed a structure known as the broad ligament that connects the uterus to the backbone and helps support the developing foal.

Remnants of the wrinkled outer uterine wall became visible after the specimen was prepared, a feature shared between Eurohippus and modern horses. The placenta in this specimen is only the second one that has been described for a fossil placental mammal.

The oil shales at Grube Messel have long been known for their marvelous fossils. These oil shales formed at the bottom of ancient Lake Messel and preserve the remains of mammals, birds, and other animals that were living near what is now Darmstadt, Germany about 47 million years ago (the Eocene epoch). No oxygen was present at the bottom of the lake when the dead animals sank down and finally became embedded in the muddy sediments.

There, anaerobic bacteria immediately began to decompose skin, muscles, and other soft tissues. As a result, the bacteria produced carbon dioxide, which in turn precipitated iron ions present in the lake water. In this way, the bacteria petrified themselves, developing only a very thin bacterial lawn depicting the soft tissue as black shadow. Consequently, Messel fossils preserve these remains not directly, but as images.

The size of the fetus and the presence of fully developed milk teeth indicate that it was close to term when it and its mother died. Nevertheless, its position in the uterus indicates that the two did not die during the birthing process. The fetus was upside down rather than right side up, and its front legs were not yet extended as they should be just before birth.