News Staff
A new fossil hominid species has been discovered in the site of Woranso-Mille in the central region of Afar, in Ethiopia.

The new species is named Australopithecus deyiremeda and consists of the upper and  lower jaws and a collection of teeth in the sites of Burtele and Wayteleyta, in Woranso-Mille, in the central region of Afar, about 50 kilometers north of Hadar and 520 kilometres northeast of the capital Addis Ababa. The fossil specimens are 3.3 – 3.5 million-years-old.

More than three-million years ago, the new species Australopithecus deyiremeda —name that comes from día-ihreme-dah, which means ‘close relative’ in the language spoken by the Afar people— lived in the plains of the region of Afar (Ethiopia), an area of eastern Africa, where it co-existed with the Australopithecus afarensis, the popular Lucy, discovered by Donald Johanson, Ives Coppens and Tim White in 1974 in the Ethiopian site of Hadar. A. afarensis is a species that lived in Africa between 2.9 and 3.9 million years ago. 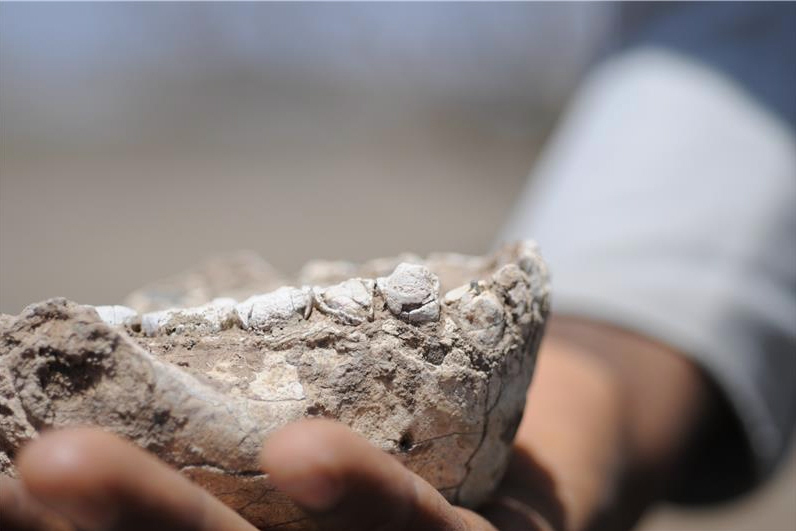 Scientists have long argued that A. afarensis was the only pre-human species which lived in the region between 3 and 4 million years ago. Some recent fossil discoveries —for example, Australopithecus bahrelghazali, from Txad, and Kenyanthropus platyops, from Kenya— challenged this long-held idea although a number of researchers were sceptical about the validity of these species.

“The discovery of A. deyiremeda in the region of Afar proves that A. afarensis co-existed with other human species; it is the first time that fossils provide conclusive evidence for the presence of more than one hominid species during the Mid-Pliocene”, explains UB researcher Lluís Gibert, who has participated in the field research conducted in Woranso-Mille since 2010 and is responsible for the chronostratigraphic and sedimentological interpretation of fossils found in the area.

According to Yohannes Haile-Selassie, lead author and Woranso-Mille project team leader, “the new species is yet another confirmation that Lucy’s species, Australopithecus afarensis, was not the only potential human ancestor species that roamed in what is now the Afar region of Ethiopia during the Mid-Pliocene”. “Current fossil evidence from the Woranso-Mille study area clearly shows that there were at least two, if not three, early human species living at the same time and in close geographic proximity”.

This potential third species, which has not been classified into a taxon yet, matches a partial fossil foot dated at 3.4 million years ago and found in the area of Burtele, Ethiopia, by the research team led by Professor Haile-Selassie (Nature, 2012). “However, despite it has not been assigned to any specific species —stresses Lluís Gibert—, this hominid fossil has a great scientific potential because it shows other patterns of adaptation to hominid locomotion more than three million years ago in this African region”.

Similarities to Paranthropus and Homo

Experts affirm that the new species A. deyiremeda is clearly distinct from A. afarensis in its anterior facial, dental, and mandibular morphology. Its thick-enamelled anterior teeth may also indicate that it probably had a different diet, richer and more varied than A. afarensis, and probably more similar to the one of the genus Homo.

Surprisingly, the new species clearly shows that some morphological features of the jaws and teeth which are similar to Paranthropus and Homo (for example, a relatively robust mandibular body and thick-enamelled teeth), which have first appeared in the fossil record earlier than previously thought. “The age of the new fossils is very well constrained by the regional geology, radiometric dating, and new paleomagnetic data,” says Beverly Saylor, expert from Case Western Reserve University (Cleveland, Unites States).

Why so many fossils in the region of Afar?

In the Late Miocene, the formation of the Great Rift Valley —a continuous geographic trench, approximately 5,000 kilometres length, that runs across Eastern Africa— favoured the creation of sedimentary basins, the destruction of forests and the formation of wide open areas of land (savannah) with an arid climate which has played a key role in the evolution of human ancestors.

“Fauna in marsh areas was abundant. When an animal died on river banks, skeletons were rapidly covered by sediments that facilitated fossilization”, affirms Lluís Gibert. “This process —he adds— has enabled us to have a rich fossil register in a key area to understand the origin and evolution of first hominids”. Therefore, it is crucial to study sedimentary and palaeoclimatological aspects in order to better understand the relationship between climate changes and the evolution of fauna and hominids in Africa.

“According to different palaeoclimatological indicators, around 2.8, 1.7 and 1 million years ago, respectively, it took place an important increase of aridity and the savannah spread to the east of Africa, which matches the extinction and appearance of new fauna and hominid species”, highlights Lluís Gibert. “We are studying if a similar process took place during the Mid-Pliocene that favoured the formation of new species. So far, it has been proved that sediments found in Woranso-Mille present a gradual increase in the content of celestine, a mineral formed in arid environments that suggests a gradual increase of aridity during this period of time in the region of Afar”.

A new hominid in the human ancestor ‘family’

This discovery of Australopithecus deyiremeda has important implications for our understanding of early hominid ecology. It also raises significant questions, such as how multiple early hominids living at the same time and geographic area might have used the shared landscape and available resources in Afar.

“When an important fossil is found, there is always a great scientific debate —points out Lluís Gibert— and, without any doubt, this find will raise many new discussions about human origin”.

Professor Haile-Selassie affirms that “this new species from Ethiopia takes the on-going debate on early hominid diversity to another level. Some of our colleagues are going to be sceptical about this new species, which is not unusual. However, I think it is time that we look into the earlier phases of our evolution with an open mind and carefully examine the currently available fossil evidence rather than immediately dismissing the fossils that do not fit our long-held hypotheses”.