News Staff
The MUSE instrument on ESO's Very Large Telescope has given astronomers the best ever 3-D view of the deep Universe - in just 27 hours.

By taking very long exposure pictures of regions of the sky, astronomers have created many deep fields that have revealed much about the early Universe. The most famous of these was the original Hubble Deep Field, taken by the NASA/ESA Hubble Space Telescope over several days in late 1995. This spectacular and iconic picture rapidly transformed our understanding of the content of the Universe when it was young. It was followed two years later by a similar view in the southern sky -- the Hubble Deep Field South.

But these images did not hold all the answers -- to find out more about the galaxies in the deep field images, astronomers had to carefully look at each one with other instruments, a difficult and time-consuming job. But now, for the first time, the new MUSE instrument can do both jobs at once -- and far more quickly.  By staring at the Hubble Deep Field South region for just over a day, the new observations reveal the distances, motions and other properties of far more galaxies than ever before in this tiny piece of the sky. They also go beyond Hubble and reveal previously invisible objects.

One of the first observations using MUSE after it was commissioned on the VLT in 2014 was a long hard look at the Hubble Deep Field South (HDF-S). The results exceeded expectations. 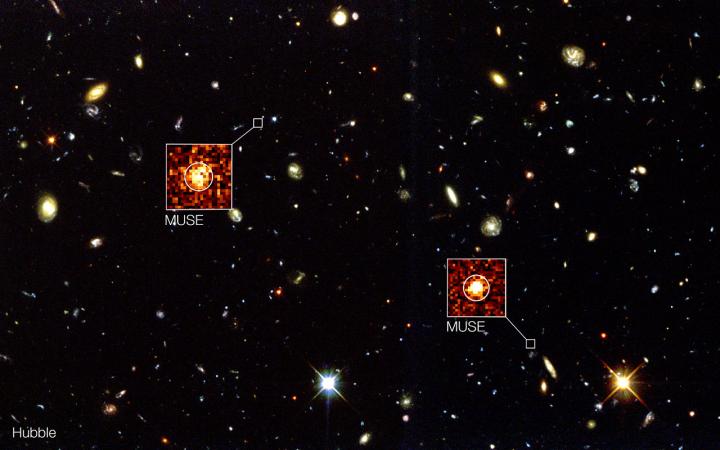 "After just a few hours of observations at the telescope, we had a quick look at the data and found many galaxies -- it was very encouraging. And when we got back to Europe we started exploring the data in more detail. It was like fishing in deep water and each new catch generated a lot of excitement and discussion of the species we were finding," explained Roland Bacon (Centre de Recherche Astrophysique de Lyon, France, CNRS) principal investigator of the MUSE instrument and leader of the commissioning team.

For every part of the MUSE view of HDF-S there is not just a pixel in an image, but also a spectrum revealing the intensity of the light's different component colours at that point -- about 90 000 spectra in total.  Each spectrum covers a range of wavelengths from the blue part of the spectrum into the near-infrared (475-930 nanometers).

These can reveal the distance, composition and internal motions of hundreds of distant galaxies -- as well as catching a small number of very faint stars in the Milky Way.

Even though the total exposure time was much shorter than for the Hubble images, the HDF-S MUSE data revealed more than twenty very faint objects in this small patch of the sky that Hubble did not record at all. MUSE is particularly sensitive to objects that emit most of their energy at a few particular wavelengths as these show up as bright spots in the data. Galaxies in the early Universe typically have such spectra, as they contain hydrogen gas glowing under the ultraviolet radiation from hot young stars.

"The greatest excitement came when we found very distant galaxies that were not even visible in the deepest Hubble image. After so many years of hard work on the instrument, it was a powerful experience for me to see our dreams becoming reality," adds Roland Bacon.

By looking carefully at all the spectra in the MUSE observations of the HDF-S, the team measured the distances to 189 galaxies. They ranged from some that were relatively close, right out to some that were seen when the Universe was less than one billion years old. This is more than ten times the number of measurements of distance than had existed before for this area of sky.

For the closer galaxies, MUSE can do far more and look at the different properties of different parts of the same galaxy. This reveals how the galaxy is rotating and how other properties vary from place to place. This is a powerful way of understanding how galaxies evolve through cosmic time.

"Now that we have demonstrated MUSE's unique capabilities for exploring the deep Universe, we are going to look at other deep fields, such as the Hubble Ultra Deep field. We will be able to study thousands of galaxies and to discover new extremely faint and distant galaxies. These small infant galaxies, seen as they were more than 10 billion years in the past, gradually grew up to become galaxies like the Milky Way that we see today," concludes Bacon.