New fossils from the Late Triassic period (235 to 201 million years ago) are changing scientists' understanding of what drastically different forms can evolve in the tetrapod forelimb, including skeletal adaptations never before seen in land animals.

The new fossils belong to an ancient reptile known as Drepanosaurus collected from Hayden Quarry in Ghost Ranch, northern New Mexico. Drepanosaurs are an extinct group of reptiles that, although superficially lizard-like, are not lizards, nor dinosaurs. Most were small (only 1 to 2 feet in length) and are known to have lived exclusively during the Late Triassic. Prior to the team’s discoveries at Ghost Ranch, Drepanosaurus was known from decades-old, badly crushed skeletons from Italy.

“Many of the drepanosaur fossils we collected are preserved in three dimensions but are very fragile”, says Dr. Alan Turner, a co-author on the study from Stony Brook University.  “Because of this we were able to leverage high resolution imaging, such as microCT, to reveal aspects of the forelimb and claw morphology previously unattainable from the Italian fossils. This proved critical in unraveling the strange anatomy of these animals.” 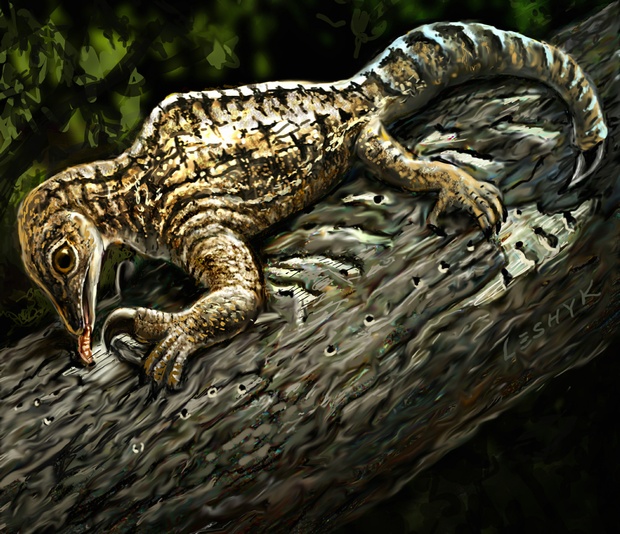 New fossils from 212 million-year-old rocks in New Mexico, USA, indicate that the small reptile Drepanosaurus used its massive claw and powerful arm to rip away tree bark to expose insects within. Artwork by Victor Leshyk.

“Drepanosaurus really stretches the bounds of what we thought were the evolutionary constraints on limb evolution,” said Dr. Adam Pritchard of Yale University, the lead author of the study. “Ecologically, the critter seems to be a sort of chameleon-anteater hybrid, which is really bizarre for the Triassic Period. It possesses a totally unique forelimb among vertebrate animals.”

Nearly all four-limbed vertebrates, whether they are dolphins, bats, or birds, have a forelimb that consists of two elongate and parallel bones—the radius and ulna. These bones contact a set of wrist bones that form the bridge between the forearm and the hand.

“When you combine this with a claw nearly as large as the arm,” adds Dr. Pritchard, “what you get is an arm well adapted for powerful hook-and-pull digging. Think of anteaters digging into insect mounds.”

In addition to the forelimb specialization, Drepanosaurus had grasping feet and a claw-like structure at the end of the tail that might have assisted a life spent in the trees. The team’s findings suggest that reptiles had already evolved specialized, modern ecological roles more than 200 million years ago.

"The bizarre arms of Drepanosaurus highlight not only the anatomical experimentation that evolution is capable of, but also the establishment of unique ecological roles in the Triassic which we don't see again for hundreds of millions of years" says Dr. Smith.