"Dark matter" is a blanket term for inferred matter that is undetected but must exist in order for gravity at very large scales to make any sense at all.

Andrei Derevianko, of the University of Nevada, Reno, and Maxim Pospelov, of the University of Victoria, have proposed a method for a dark matter search that doesn't require expensive Big Physics funding. They propose using GPS satellites and other atomic clock networks that compare times from the clocks and look for discrepancies. 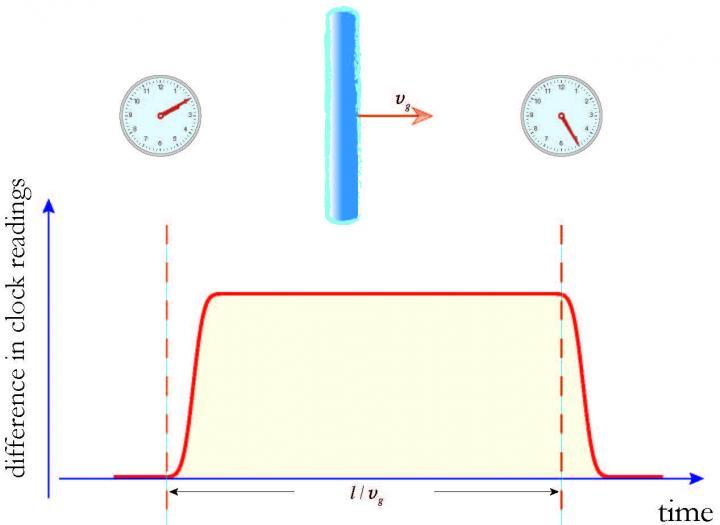 This two-clocks-illustration shows the pattern of how two atomic clocks would desynchronize and then resynchronize due to a lump of dark matter sweeping through a Global Positioning System or other atomic clock based network. Photo courtesy of Andrei Derevianko, University of Nevada, Reno.

"Modern physics and cosmology fail dramatically in that they can only explain 5 percent of mass and energy in the universe in the form of ordinary matter, but the rest is a mystery," says Derevianko. "Our research pursues the idea that dark matter may be organized as a large gas-like collection of topological defects, or energy cracks," Derevianko said. "We propose to detect the defects, the dark matter, as they sweep through us with a network of sensitive atomic clocks. The idea is, where the clocks go out of synchronization, we would know that dark matter, the topological defect, has passed by. In fact, we envision using the GPS constellation as the largest human-built dark-matter detector."

Derevianko is collaborating on analyzing GPS data with Geoff Blewitt, director of the Nevada Geodetic Laboratory, also in the College of Science at the University of Nevada, Reno. The Geodetic Lab developed and maintains the largest GPS data processing center in the world, able to process information from about 12,000 stations around the globe continuously.

The two are starting to test the dark matter detection ideas by analyzing clock data from the 30 GPS satellites, which use atomic clocks for everyday navigation. Correlated networks of atomic clocks such as the GPS and some ground networks already in existence, can be used as a powerful tool to search for the topological defect dark matter where initially synchronized clocks will become desynchronized. The time discrepancies between spatially separated clocks are expected to exhibit a distinct signature.

"We know the dark matter must be there, for example, because it is seen to bend light around galaxies, but we have no evidence as to what it might be made of," Blewitt said. "If the dark matter were not there, the normal matter that we know about would not be sufficient to bend the light as much as it does. That's just one of the ways scientists know there is a massive amount of dark matter somewhere out there in the galaxy. One possibility is that the dark matter in this gas might not be made out of particles like normal matter, but of macroscopic imperfections in the fabric of space-time.

"The Earth sweeps through this gas as it orbits the galaxy. So to us, the gas would appear to be like a galactic wind of dark matter blowing through the Earth system and its satellites. As the dark matter blows by, it would occasionally cause clocks of the GPS system to go out of sync with a tell-tale pattern over a period of about 3 minutes. If the dark matter causes the clocks to go out of sync by more than a billionth of a second we should easily be able to detect such events."