Cannibalism is fairly common in nature but the belief was always that it is practical - meat is meat. Consumption of juveniles by adults is a normal feature of the shrimp's feeding patterns, but this is the first paper to show parasites cause it and even alter the feeding patterns -  shrimp infected with the parasite ate twice as much of their own kind as uninfected animals. They attacked juvenile shrimp more often and consumed them more quickly than did uninfected shrimp. 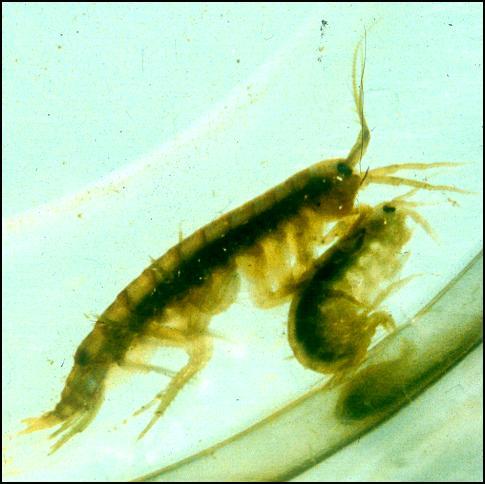 Dr. Alison Dunn, Reader in Evolutionary Biology in the University of Leeds, said, "The parasite is quite debilitating. It takes over huge areas of the muscle, so instead of a nice transparent shrimp you get quite a chalky appearance because of muscles packed with the parasite. Interestingly, our group has also found previously that infected shrimp may be able to catch and eat less prey of other animal species. Perhaps cannibalism of smaller shrimp is the only way these sick animals can survive."

Dunn said, "The parasite is passed to its new host either when it dies and is eaten by another shrimp, or when one shrimp cannibalises another. But we observed that uninfected shrimp avoid parasitised food and that is good for the shrimp as it means that they can obtain food through cannibalism but still avoid parasitic infection. Infected shrimp don't avoid infected juveniles. They consume infected and uninfected juveniles. This may be is because they are more hungry or because they are already infected so there is no incentive to avoid eating infected juveniles."

Mandy Bunke, a PhD student at the University of Leeds who was the key researcher on the study, said, "Although the parasite is tiny--similar in size to a human red blood cell--there are millions of them in the host muscle and they all rely on the host for food. This increased demand for food by the parasites may drive the host to be more cannibalistic."

A study led by Dr. Glenn McConkey, also of the University of Leeds Faculty of Biological Sciences, has shown that the parasite Toxoplasma gondii directly affects the chemistry of the human brain. However, cannibalism for the shrimp, unlike in humans, is a significant source of food even in uninfected animals. It seems unlikely that a parasite would be under evolutionary pressure to influence cannibalism in humans.

However, the study is important to understanding the extent of parasites' influence on biological systems. The Gammarus duebeni celticus, the subject of the study, is being replaced in Irish waterways by the invasive species Gammarus pulex, which is native to Great Britain. The study suggests that the parasite Pleistophora mulleri may be playing a role in weakening Gammarus duebeni's resistance.