Dark matter is ill-defined and never detected so how can a group of astronomers say current measurements are off by 50 percent?

Most of the matter in the universe is hidden. It's not stars, it's not planets, it's not dust. No one knows what it is. But it must be something or gravity does not work. That something is the mystery. Using inference, if 4 percent of the universe is matter, and around 25 percent is dark matter (what is the rest? Dark energy, an even more fanciful conjecture) then the 'weight' of  dark matter just in our galaxy is 800,000,000,000 times the mass of the Sun, say a group of Australian astronomers who used a method developed almost 100 years ago for their estimate.

They probed the edge of the Milky Way, looking closely, for the first time, at the fringes of the galaxy about 5 million billion kilometers from Earth, for their new inference. 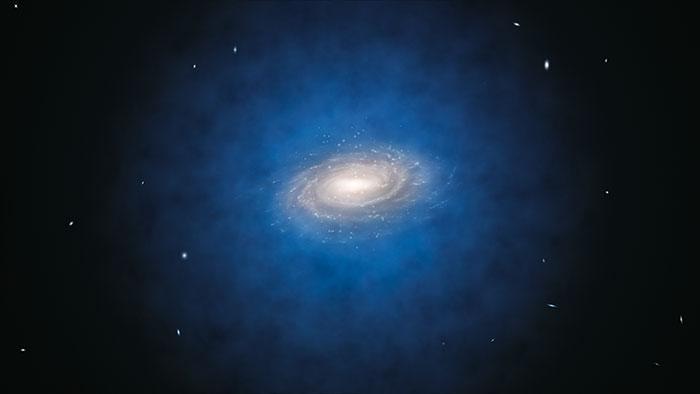 If dark matter had a halo, maybe it would look like this blue thing in an artist's rendition. But probably not. Credit: : ESO/L. Calçada

Astrophysicist Dr Prajwal Kafle, from The University of Western Australia node of the International Centre for Radio Astronomy Research, says they were able to measure the unmeasurable - the mass of the dark matter in the Milky Way - by studying the speed of stars throughout the galaxy, including the edges. The technique was developed by British astronomer James Jeans in 1915.

"The current idea of galaxy formation and evolution, called the Lambda Cold Dark Matter theory, predicts that there should be a handful of big satellite galaxies around the Milky Way that are visible with the naked eye, but we don't see that," Kafle said. "When you use our measurement of the mass of the dark matter the theory predicts that there should only be three satellite galaxies out there, which is exactly what we see; the Large Magellanic Cloud, the Small Magellanic Cloud and the Sagittarius Dwarf Galaxy."

University of Sydney astrophysicist Professor Geraint Lewis, who was also involved in the estimate, said the missing satellite problem had been "a thorn in the cosmological side for almost 15 years."