You have a new galactic address; astronomers have determined that our own Milky Way galaxy is part of a newly identified enormous supercluster of galaxies - dubbed "Laniakea," which means "immense heaven" in Hawaiian.

This discovery broadens the boundaries of our galactic neighborhood and establishes previously unrecognized linkages among various galaxy clusters in the local Universe. How big are are talking? The Milky Way galaxy alone has 100 billion stars. We think. And then there are 1012 galaxies. So your address is now a lot bigger. Instead of being Earth, Sol, Orion arm, Milky Way, Local Group and Virgo cluster, you can now add Laniakea before Universe. 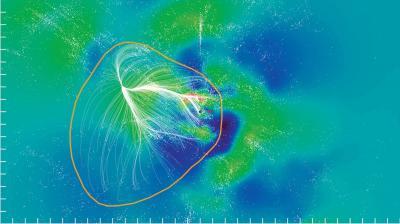 A slice of the Laniakea Supercluster in the supergalactic equatorial plane -- an imaginary plane containing many of the most massive clusters in this structure. The colors represent density within this slice, with red for high densities and blue for voids -- areas with relatively little matter. Individual galaxies are shown as white dots. Velocity flow streams within the region gravitationally dominated by Laniakea are shown in white, while dark blue flow lines are away from the Laniakea local basin of attraction. The orange contour encloses the outer limits of these streams, a diameter of about 160 Mpc. This region contains the mass of about 100 million billion suns. Credit: SDvision interactive visualization software by DP at CEA/Saclay, France.

To better refine cosmic mapmaking, the researchers are proposing a new way to evaluate these large-scale galaxy structures by examining their impact on the motions of galaxies. A galaxy between structures will be caught in a gravitational tug-of-war in which the balance of the gravitational forces from the surrounding large-scale structures determines the galaxy's motion.

"We have finally established the contours that define the supercluster of galaxies we can call home," said lead researcher R. Brent Tully, an astronomer at the University of Hawaii at Manoa. "This is not unlike finding out for the first time that your hometown is actually part of much larger country that borders other nations."

By using the GBT and other radio telescopes to map the velocities of galaxies throughout our local Universe, the team was able to define the region of space where each supercluster dominates. "Green Bank Telescope observations have played a significant role in the research leading to this new understanding of the limits and relationships among a number of superclusters," said Tully.

The Milky Way resides in the outskirts of one such supercluster, whose extent has for the first time been carefully mapped using these new techniques. This so-called Laniakea Supercluster is 500 million light-years in diameter and contains the mass of one hundred million billion Suns spread across 100,000 galaxies.

This study also clarifies the role of the Great Attractor, a gravitational focal point in intergalactic space that influences the motion of our Local Group of galaxies and other galaxy clusters.

The name Laniakea was suggested by Nawa'a Napoleon, an associate professor of Hawaiian Language and chair of the Department of Languages, Linguistics, and Literature at Kapiolani Community College, a part of the University of Hawaii system. The name honors Polynesian navigators who used knowledge of the heavens to voyage across the immensity of the Pacific Ocean.