In the early morning hours of March 4th, 2002, a reconnaissance team of US Navy SEALs became pinned down on the ridge dividing the Upper and Lower Shahikot valley in Afghanistan.

A Chinook helicopter with 21 men on a mission to rescue them was heading for the snowcapped peak of Takur Ghar  when U.S. military officers in Bagram radioed them with a message not to land on the peak, because the mountaintop was under enemy control.

The rescue team never got the message. Just after daybreak, the Chinook took heavy enemy fire and it crash-landed on the peak. Three men were killed in the ensuing firefight.

Fog of war? It was unclear what happened but Michael Kelly, of the Johns Hopkins University Applied Physics Laboratory (APL), happened to read an account of that battle, Operation Anaconda, and thought radio operators may have been thwarted by a little-known source of radio interference: plasma bubbles. 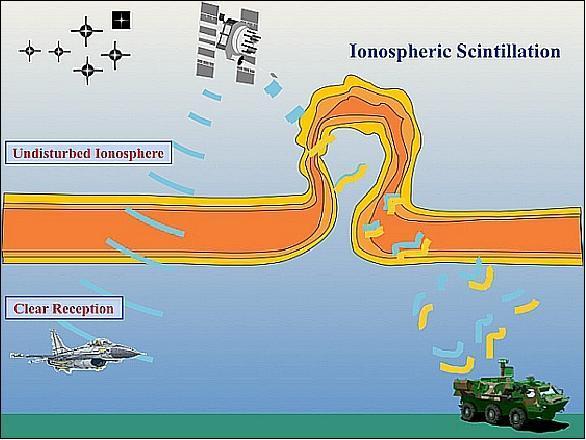 Tendrils of low-density, charged particles are called plasma bubbles, and turbulence at their edges can skew radio frequency waves passing through them. Applied Physics Laboratory researchers provide evidence that plasma bubbles may have contributed to the communications outages during a 2002 Afghanistan battle. Credit: NASA

Kelly and colleagues created a numerical model which they believe provides evidence that plasma bubbles may have contributed to the communications outages during the battle of Takur Ghar.

Giant plasma bubbles – wispy clouds of electrically charged gas particles – form after dark in the upper atmosphere. Typically around 100 kilometers (62 miles) wide, the bubbles can't be seen but they can bend and disperse radio waves, interfering with communications.

Plasma is pervasive in the upper atmosphere during daylight hours when the sun's radiation rips electrons from atoms and molecules. Sunlight keeps the plasma stable during the day, but at night, the charged particles recombine to form electrically neutral atoms and molecules again. This recombination happens faster at lower altitudes, making the plasma there less dense, so that it bubbles up through the denser plasma above, like air bubbles rising through water. The rising tendrils of low-density, charged particles are called plasma bubbles, and turbulence at their edges can skew radio frequency waves passing through them. A map of the area of Operation Anaconda showing the Shahikot Valley (outlined in blue) and the peak of Takur Ghar, which rises 3,191 meters (10,469 feet) out of the valley below. Credit: US Army

In the atmosphere above Afghanistan, peak bubble season generally occurs during the spring, according to the study's authors. Given the timing and location of the battle of Takur Ghar, the researchers thought these atmospheric anomalies could have been present.

To confirm their suspicions, Kelly's team looked at data from the Global Ultraviolet Imager(GUVI) instrument aboard NASA's Thermosphere, Ionosphere, Mesosphere Energetics and Dynamics (TIMED) mission, which launched in 2001 to study the composition and dynamics of the upper atmosphere.

"The TIMED spacecraft flew over the battle field at about the right time," said Kelly, the lead author of the new study. That was a stroke of luck for the researchers, Kelly noted—and realizing that that spacecraft might have been there was a breakthrough moment.

Joseph Comberiate, a space physicist at APL and a co-author of the new study, developed a technique to transform the two-dimensional satellite images into three-dimensional representations of plasma bubbles. Using this technique, the authors were able to show that on March 4, 2002 there was a plasma bubble directly between the ill-fated Chinook and the communications satellite. The new model shows the electron-depleted regions of the atmosphere where radio wave interference, known as scintillation, is most likely to occur.

The plasma bubble that was present during the battle of Takur Ghar was probably not large enough to disturb radio communications by itself, but likely contributed to the radio interference caused by the complex terrain in the area, according to the new study. Both factors ultimately led to the black-out in communications between the operations center and the helicopter, the new research says.

In that kind of terrain, the radio equipment was already "operating out on the edge," said Kelly. Losing a few decibels of radio signal due to plasma bubbles "could have pushed them over the edge," he suggested.

The new model could be used to minimize the impacts of plasma bubbles in the future by detecting and predicting their movement for several hours after they form, the researchers said. The model combines data from several different satellite-based systems to detect the bubbles and uses wind and atmospheric models to predict where they will drift.

By identifying these turbulent bubbles and their paths in real time, soldiers may be able to predict when and where they will experience radio interferences and adapt by using a different radio frequency or some other means of communication, said Comberiate. The group is currently working to validate the new model so it can be used in future military operations.

"The most exciting part for me is to see something go from science to real, potential operational impact," he said.